A Turkish appeals court has approved the release of jailed opposition politician Selahattin Demirtas, but he and his lawyers are pessimistic that the judiciary will act independently of political pressure to keep him behind bars. 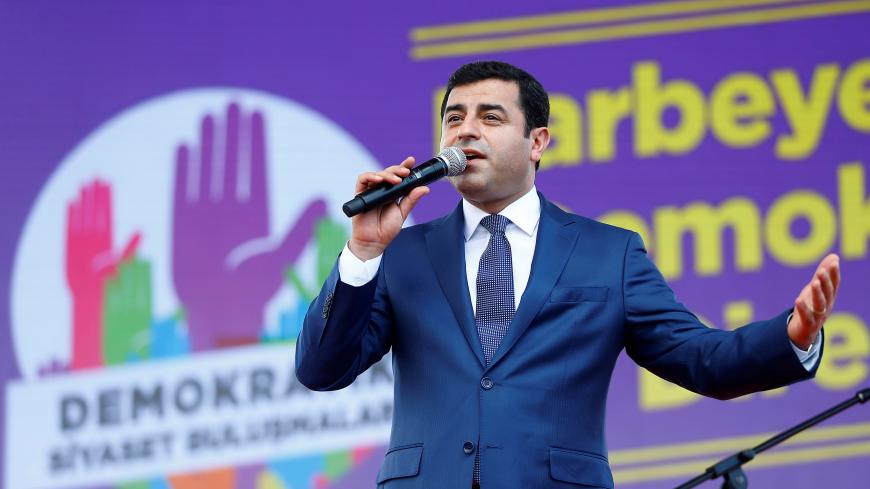 ISTANBUL — Lawyers for jailed Kurdish politician Selahattin Demirtas called on Turkey’s judiciary to heed a high court ruling for his release from prison as they prepare to argue his case before a panel of international judges this week.

Demirtas has been behind bars since November 2016 on terrorism-related charges all stemming from political statements he made as chairman of the leftist Peoples’ Democratic Party (HDP), whose base is overwhelmingly Kurdish. His case has drawn the ire of the European Union and rights groups alike for harming democratic pluralism in Turkey.

A Turkish appeals court approved Demirtas’ release last week, seemingly reversing the judiciary’s stance that has rejected 70 previous motions to set him free. The law requires Demirtas be paroled after serving the required minimum time of the single sentence he has received, calculated by including his lengthy pre-trial detention, lawyer Mahsuni Karaman told reporters at a press conference on Saturday.

The government has already refused to implement an order from the European Court of Human Rights (ECtHR) made late last year to release the 46-year-old former human rights lawyer after finding his rights were violated by his lengthy detention and a politicized judiciary.

The ECtHR’s Grand Chamber convenes on Wednesday to hear both Turkey’s and Demirtas’ objections to its 2018 ruling. A decision is not expected for several months, the lawyers said.

“The decision to release [Demirtas] right before the ECtHR hearing can be viewed as an effort by the government to gain advantage in that case, but it has still not been implemented,” said lawyer Ramazan Demir.

President Recep Tayyip Erdogan accuses his rival of acting on behalf of the armed Kurdistan Workers Party (PKK) and blames him for the deaths of about 30 people who were killed in street clashes with police in 2014 during protests over the Islamic State siege of the Syrian town of Kobani, which is largely Kurdish. Demirtas denies both links with the PKK and having incited the protests.

Erdogan last year said the ECtHR decision was nonbinding for Turkey and promised a “counter move to finish the job.” Two weeks later, a Turkish court upheld Demirtas’ conviction of spreading terrorist propaganda that jailed him four years and eight months. He faces a total of 28 charges that carry combined prison sentences of hundreds of years, Karaman said.

“The president, lawmakers, everyone has meddled and applied pressure in the case, especially during the election periods, to keep Demirtas in prison, which the ECtHR itself has noted,” Demir said. “To expect a case that was opened and continues under political influence to be resolved without political interference would be naive, and that’s why the … courts are acting as if there is no release order.”

Demirtas’ prosecution is part of a broader crackdown on the Kurdish political movement that has swept up several other former HDP lawmakers and thousands of party activists. A fragile peace process with the PKK, which has waged a three-decade insurgency against the Turkish state, collapsed in 2015 and unleashed fighting that killed nearly 3,000 people in the mainly Kurdish southeast and a spate of bombings in the west.

One of Turkey’s most popular politicians, Demirtas had sought to broaden the HDP’s base beyond the Kurdish vote with a progressive platform. He twice challenged Erdogan for the presidency, including last year, when he staged an unlikely campaign from his prison cell.

Demirtas continues to exert influence from prison. Last week, he called on “all sides” to help parents protesting for the release of their sons, whom they say were recruited or abducted by the PKK, saying the families’ demands were legitimate.

In June, he urged HDP voters to cast their ballots for Ekrem Imamoglu, who ran for Istanbul mayor as a unity candidate on the rival opposition party’s ticket, during a do-over election after Imamoglu’s initial narrow victory in March was annulled. Analysts have said that Kurdish voters were critical in lifting his share to a record-winning margin in the second vote.

The ECtHR has become a lifeline for many of Turkey’s dissidents jailed in a clampdown that followed the military’s failed takeover in 2016. Last year, the France-based court found the country had violated at least one right in the European Convention on Human Rights in 140 of the 146 applications from Turkey it accepted. But the court moves slowly through the dockets and has refused to hear key petitions, arguing that claimants had not exhausted legal mechanisms in Turkey.

Benan Molu, another lawyer for Demirtas, said at the press conference that Turkey could risk ejection from the Council of Europe, which it joined as a founding member in 1949, for its failure to implement rulings in some of the cases it has lost at the ECtHR, the council’s highest judicial body.

As for Demirtas, he does not expect to walk free anytime soon despite the ruling, said Karaman. “As a politician and legal expert, Demirtas had predicted the difficulties he would face. The political trajectory and its negative impact saddens him, as it does everyone else.”