Europe’s top human rights court ruled Wednesday for the "immediate release" of Selahattin Demirtas, former co-chair of the Peoples' Democratic Party (HDP), who has been imprisoned for more than four years in Turkey on terror-related charges. 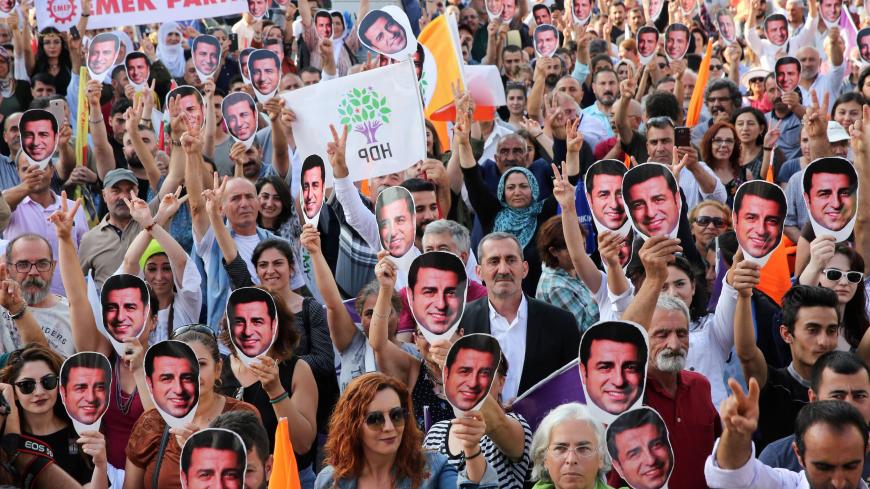 Supporters of imprisoned Selahattin Demirtas, presidential candidate and leader of Peoples' Democratic Party (HDP), hold masks as they march during a rally in Ankara, on June 19, 2018. - ADEM ALTAN/AFP via Getty Images

ISTANBUL — The Grand Chamber of the European Court of Human Rights (ECHR) ruled Wednesday for "immediate release" of a prominent Kurdish politician in Turkey, stating his more than four-year imprisonment was a violation of his rights and served to hinder democratic pluralism in the country.

In the judgment, the Chamber ruled Selahattin Demirtas, former co-chair of the pro-Kurdish Peoples' Democratic Party (HDP), has been held in pre-trial detention since November 2016 without sufficient evidence to uphold the terror-related charges lodged against him by Turkish courts.

“The reasons put forward by the authorities for the applicant’s pre-trial detention had merely been cover for an ulterior political purpose, which was a matter of indisputable gravity for democracy,” the Chamber concluded in its statement.

Demirtas faces 142 years in prison for alleged membership in the Kurdistan Workers Party (PKK), a Kurdish militant group that has fought the Turkish state since 1984 and is a designated terror organization in Turkey, the European Union and the United States.

He is also accused of inciting violence through his speeches in 2014 when protests erupted in Turkey against the state’s response to clashes in the northern Syrian city of Kobani between Islamic State militants and Kurdish militias. The protests resulted in the deaths of 37 people.

The Chamber ruled that Turkish court rulings for Demirtas’ initial and continued pre-trial detention lacked “a clear link between his actions … and the terrorism-related offenses for which he had been detained.”

Reacting to the judgment, Benan Molu, a human rights lawyer representing Demirtas, tweeted, “With this decision, all the accusations against our client were voided and it was registered that the client had been held hostage due to political reasons for four years.”

After unsuccessfully appealing Demirtas’ detention in Turkish courts, his legal team lodged an application with the ECHR in February 2017. The Court issued a judgment for Demirtas’ release on Nov. 20, 2018, stating he had been denied the right to a speedy trial.

Ten days later, an Ankara court handling the main case ruled to continue Demirtas’ detention, stating the ECHR ruling was not final. Then, on Dec. 4, an Istanbul appeals court upheld a separate jail sentence against Demirtas on charges of disseminating terrorist propaganda during a 2013 speech, and his imprisonment continued.

Both Demirtas and the Turkish government requested the case be sent to the Grand Chamber in February 2019. The Chamber issued its judgment, upholding the 2018 ECHR ruling in which the court found Demirtas’ detention violated Article 18 of the European Convention, or the limitation on restrictions of rights. It was the first time the ECHR found Turkey to be in violation of Article 18.

In its judgment, the Chamber also found Turkey to be in violation of the European Convention’s Article 10: freedom of expression; three protocols under Article 5: the right to liberty, security and a speedy trial on the lawfulness of detention; and Article 3: the right to free elections, as Demirtas ran a campaign from prison for the June 24, 2018, presidential elections and was in jail during a key referendum in 2017.

In addition, the Chamber found state authorities to have violated Article 46, citing the failure to take necessary measures to secure Demirtas’ release.

Milena Buyum, Turkey campaigner for Amnesty International, said the Chamber judgment “could not be clearer,” adding that Demirtas was “kept in prison in order to exclude him from legitimately participating in politics.”

“In other words, an opposition politician is still deprived of his liberty and his right to freedom of expression for political reasons, not because he has committed the crimes he is accused of,” Buyum told Al-Monitor. “No ifs, no buts. This ruling must be implemented forthwith and Demirtas released immediately.”

Since entering the Turkish parliament in 2015, the HDP has come under increasing state pressure, especially following the passage of a parliamentary amendment in May 2016 that allowed for immunities to be lifted on parliamentary members and a failed coup in July of that year, which sparked a broad crackdown on opposition groups and civil society members.

Demirtas was initially taken into custody on Nov. 4, 2016, along with several other HDP deputies, including the party’s former co-chair, Figen Yuksekdag, who also remains imprisoned on terror-related charges.