Despite both Turkish courts and the European Court of Human Rights calling for the release of opposition leaders Selahattin Demirtas and Figen Yuksekdag, the officials may remain behind bars in pretrial detention for new investigations. 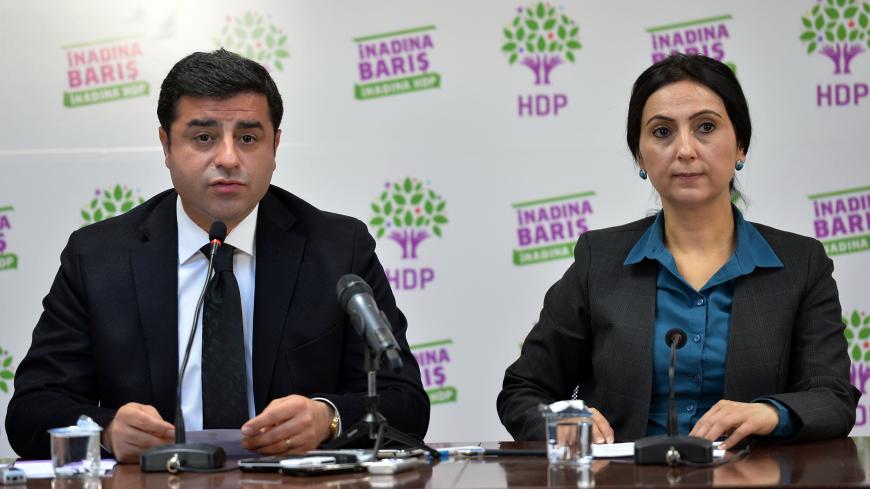 As the former leaders of Turkey’s majority-Kurdish Peoples’ Democratic Party (HDP) approach their third anniversary behind bars, the multiplicity of cases against them are becoming increasingly convoluted.

Former HDP co-chairs Selahattin Demirtas and Figen Yuksekdag were originally taken into custody for terror-related charges on Nov. 4, 2016, along with nine HDP lawmakers.

The pair has since been held in pretrial detention as dozens of court proceedings have been opened, most of which stem from past speeches that have drawn charges of “making propaganda for an armed terrorist group” and “membership of an armed terrorist group,” alleging illicit support of the Kurdistan Workers Party (PKK), a Kurdish militant group that has been at war with the Turkish state since the 1980s.

Despite assessments by a Turkish court and the European Court of Human Rights (ECHR) supporting the release of Demirtas — a ruling that could eventually be applied to Yuksekdag — the former HDP leaders are likely to remain behind bars in pretrial detention due to the expansion of a new terror-related investigation on Friday. Lawyers representing the HDP leaders said the move was a way to adhere to the ECHR ruling in Demirtas’ main case while keeping both Demirtas and Yuksekdag imprisoned on separate charges.

The latest case opens new files against Demirtas and Yuksekdag regarding an existing investigation into their alleged incitement of violence during the Kobani riots in 2014. On Friday, a Turkish prosecutor accused the pair of fanning protests in October 2014 — which led to the deaths of 53 people, including two police officers — over the perceived lack of humanitarian assistance from the Turkish state during fighting across the Syrian border between IS militants and Kurdish forces in Kobani.

During a speech at the Teknofest in Istanbul on Saturday, Turkish Recep Tayyip Erdogan said releasing of the former HDP leaders would deny justice to those who died during the 2014 riots.

"We can't release these people," Erdogan said. “If we release them, our martyrs will have us account for it in the eternal realm.”

With dozens of ongoing trials, Demirtas is currently facing up to 142 years of prison in the main case against him. Ezgi Gungordu, one of the lawyers for Yuksekdag, said her client faces up to 80 years imprisonment if she is found guilty of the 10 charges in her main case.

Yuksekdag is scheduled to stand trial this Friday at Ankara's 16th Assize Court. While Gungordu said she expects her client to be released from pretrial detention in her main case, the new investigation will likely keep Yuksekdag behind bars.

Gungordu cited last week’s ECHR hearing, in which the Turkish state’s defense team claimed the human rights case regarding the legality of the detention of HDP officials was rendered invalid as Demirtas was no longer being prosecuted for the case that was originally filed in the European court. Seeing as Demirtas remains in pretrial detention for separate cases not being reviewed by the ECHR, Gungordu said a similar maneuver would be used to continue Yuksekdag’s pretrial detention.

“They might order her release just as a precaution against an appeal to the ECHR,” Gungordu told Al-Monitor.

In Yukekdag’s main case, Gungordu said there are at least 50 folders of evidence that her team of a dozen lawyers has yet to fully evaluate, but the prosecutors are pushing to for a verdict this Friday.

Gungordu told Al-Monitor. “It’s very obvious that they want to release her but also convict her and also place her in pretrial detention for different cases.”

Officials with Turkey’s Ministry of Justice did not respond to multiple interview requests for this article.

According to Gungordu, while prosecuted HDP officials applied jointly to the ECHR on the grounds for and length of their pretrial detentions, Demirtas’ case was heard first as he was running in Turkey’s 2018 presidential elections. Despite his imprisonment, Demirtas remains a prominent opposition leader in Turkey best known for challenging Erdogan’s presidential ambitions and temporarily denying his Justice and Development Party its parliamentary majority following the June 2015 elections.

After last week’s ECHR hearing, Demirtas’ legal team expects a verdict within eight to 12 months, and the decision is expected to indicate how ongoing proceedings will unroll for the other prosecuted HDP deputies.

Kerem Altiparmak, one of the lawyers representing Demirtas, said the proceedings remain highly politicized and that Turkish courts lack the independence to apply the ECHR’s ruling.

“So far, what we’ve seen is that Turkish judges and courts will only follow the judgment of the European Court of Human Rights if it is directed by political decision-makers,” Altiparmak told Al-Monitor. “It seems to me, and I think many people will share this view, it isn’t in the power of the Turkish judiciary to decide whether or not to follow the judgments of the European Court of Human Rights.”