Europe’s top human rights court ordered Turkey to free Selahattin Demirtas, a popular Kurdish politician held for two years for his speeches. In an interview before the ruling, he said the European Union is defending its own values by speaking out for him. 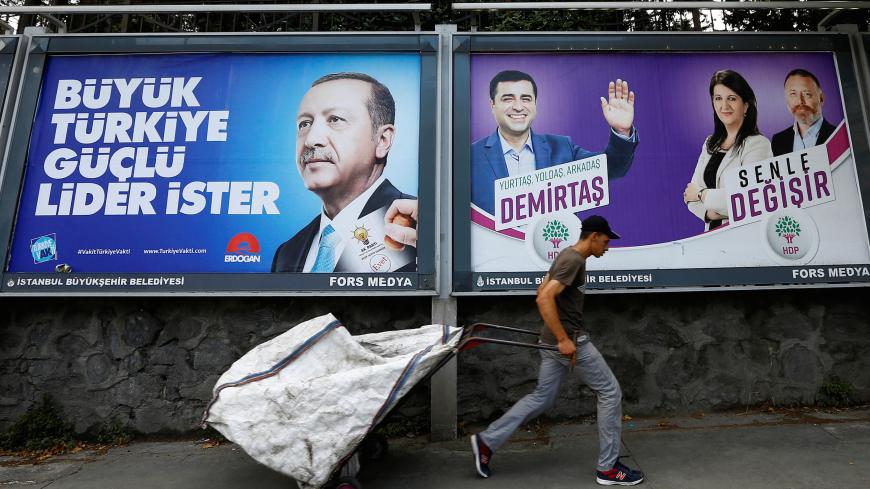 An international court this week ordered Turkey to free an opposition politician, ruling his prolonged detention in Turkey was politically motivated and harmed pluralism. But Selahattin Demirtas remains behind bars after the country’s strongman leader, Recep Tayyip Erdogan, rebuffed the court, threatening a confrontation with Europe.

The European Court of Human Rights (ECHR) said keeping Demirtas in prison for two years during dozens of trials on terrorism charges violated three articles of the European Convention on Human Rights. Erdogan promptly shot back, saying Turkey was not obliged to implement the decision, even though it is a signatory to the treaty, which says the Strasbourg-based court’s rulings are binding.

The standoff cast a shadow over a visit to Ankara by top EU officials for talks on Turkey’s long-stalled application for membership, just as the government works to repair its frayed relationship with the bloc. In her first visit to Turkey in more than two years, EU’s foreign policy chief Frederica Mogherini criticized Demirtas’ detention and the ongoing arrests of journalists, academics and activists.

“We hope he [Demirtas] will be released shortly, and that similar cases will be dealt with soon,” she said at a tense press conference on Thursday with Turkish Foreign Minister Mevlut Cavusoglu. “We believe that it is in the interest of Turkey to follow up on the [ECHR] decisions.” For his part, Cavusoglu urged the EU to stop defending his government’s opponents and on Friday said Mogherini was “out of line.”

In an interview with Al-Monitor a day before the ruling, Demirtas said he expected the EU to speak out against a clampdown in Turkey that has made justice elusive for thousands of members of his pro-Kurdish Peoples’ Democratic Party (HDP), which he led until early this year.

“Rather than standing up for me, the EU is defending its founding principles, and this means it cannot stay silent in the face of what has been done to us,” Demirtas said in written responses to questions submitted through his lawyers.

“Everyone accepts that the judiciary is not fair nor independent. … [Erdogan] himself applies the most overt political pressure on my cases,” he said. “Because the rule of law has been suspended in political trials, it is difficult to predict the outcome of proceedings. I'm ready for everything.”

One of Turkey’s most popular political figures, Demirtas was jailed in November 2016 on terrorism charges arising from his political speeches that often targeted Erdogan’s authoritarian style of rule. For his part, Erdogan has called Demirtas a “terrorist,” tying him to the outlawed Kurdistan Workers Party (PKK), which has waged a three-decade armed campaign for autonomy. A former human rights lawyer, Demirtas denies links with the group and espouses a negotiated settlement to the conflict.

His lengthy imprisonment has sidelined him from political life and is part of a broader crackdown on the Kurdish political movement after a resurgence in violence by militants in 2015 and 2016. Turkey began negotiating to join the EU in 2005, but a steady erosion in its democratic credentials has made membership all but impossible, especially after Erdogan faced down a military coup in 2016 and jailed more than 50,000 of his opponents in the aftermath.

In its ruling, the ECHR on Tuesday deemed Demirtas’ initial arrest was made on “reasonable suspicion” he had committed an offense, but that extending his detention was made “on grounds that could not be regarded as ‘sufficient’ to justify its duration.” It ordered Turkey to pay him 25,000 euros ($28,500) for damages and costs.

Judges also found that Demirtas’ detention “pursued the predominant ulterior purpose of stifling pluralism and limiting freedom of political debate.” Demirtas had been arrested on Erdogan’s orders and held for so long due to a “tense political climate in Turkey in recent years [that] had created an environment capable of influencing certain decisions by the national courts,” they wrote.

In response, Erdogan accused the court of bias. “The ECHR’s decisions are not binding for us. … We will make our countermoves,” he said without elaborating. He did not meet with Mogherini and EU Commissioner for Enlargement Negotiations Johannes Hahn during their visit.

Erdogan’s defiant stance belies his recent efforts to bridge the rift with the West to mitigate the impact of an economic crisis that threatens Turkey with a recession. One form of outreach has been to free foreign nationals Turkey has jailed, such as Andrew Brunson, a North Carolina Evangelist prosecuted on coup-related charges who enjoyed vigorous lobbying by US President Donald Trump.

Flouting the ECHR ruling would require Turkey to withdraw from the rights convention, said Riza Turmen, a former ECHR justice from Turkey. He also told Cumhuriyet newspaper that this marked the first time his former court ruled against a country for violating a politician’s right to be elected.

The Council of Europe, the rights body Turkey joined as a founding member in 1949 and that created the ECHR, has also called on Turkey to respect the ruling. Cavusoglu dismissed speculation that Turkey could be forced to leave the council if it defied the ruling on Demirtas and accused the court of being “politicized.”

The ECHR said Turkey violated the principles of fair elections by jailing Demirtas during June’s presidential election in which he staged a quixotic challenge against Erdogan from his prison cell, and a 2017 referendum that ushered in the constitutional changes Erdogan needed to implement an executive-style presidency that concentrates all levers of power in his office.

Before his arrest, Demirtas, 45, led the HDP to a historic third-place finish in a 2015 general election by drawing support from nontraditional voters for a progressive platform and pledge to thwart Erdogan’s drive for one-man rule. But he was unable to stop the spiral of violence between the PKK and security forces that erupted a month after the election when a peace process the HDP helped the government secure collapsed.

Eight other former and current HDP lawmakers are also in prison, along with as many as 6,000 party activists and mayors. Some observers argued that Demirtas’ victory at the ECHR should serve as a precedent for other politically motivated trials.

The ruling “should have far-reaching implications within the country where civil society actors are routinely remanded in prolonged pre-trial detention under trumped-up charges,” Amnesty International’s Andrew Gardner said in a statement. “It exposes the pernicious and undue influence of politics in Turkey’s broken judicial system, in which the peaceful expression of opinions and political dissent are punished through the courts.”

Demirtas said in a statement after the ruling that it showed he was a “political hostage. … The court cases and allegations against me have all collapsed.” His lawyers applied to a Turkish court for his immediate release, arguing that continuing to hold him violated his right to liberty, according to an emailed statement. He was sentenced to almost five years in prison in September in connection with a 2013 speech in the first verdict handed down, but his pre-trial detention amounts to time served, they argue.

In the interview with Al-Monitor, Demirtas said he has given up being active in politics, at least while he remains behind bars. For now, he spends his days in a prison cell writing — he’s already published a book of short stories — and he keeps his spirits up by preparing his defense ahead of court appearances in the dozens of trials he faces.

“Since these court cases are to do with the speeches and political activities I engaged in while I was outside of prison … defending my justified beliefs gives me strength,” he said. “The only way for me to contribute to peace is to continue to believe in it with all of my heart.”