Selahattin Demirtas plans to relinquish his post as co-chair of the Peoples' Democratic Party, as Ankara continues to repress political opposition. 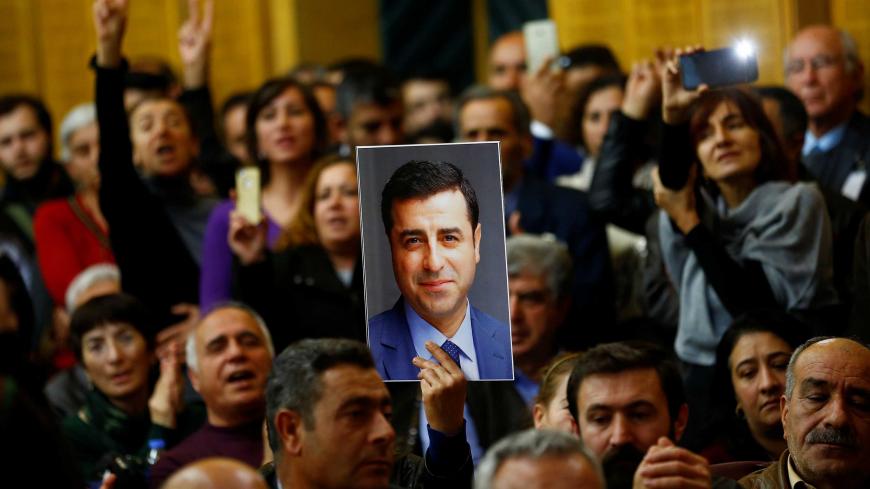 A supporter holds a portrait of Selahattin Demirtas, the detained leader of Turkey's pro-Kurdish opposition Peoples' Democratic Party, at a meeting at the Turkish parliament in Ankara, Turkey, Nov. 8, 2016. - REUTERS/Umit Bektas

The most charismatic politician to emerge in Turkey in a decade announced that he will be stepping down as co-chair of the pro-Kurdish Peoples’ Democratic Party (HDP), saying he will not seek re-election at the party congress scheduled for Feb. 11. Selahattin Demirtas, who has been held in jail for more than a year on a slew of alleged “terror” crimes, conveyed his resignation in a letter published by the party he has led since 2014.

Demirtas said he is stepping aside to enable the party to operate more effectively, which will remain a challenge with the government continuing its blanket repression of the opposition, in particular of pro-HDP Kurds. An HDP spokesman, Osman Baydemir, said around 10,000 HDP supporters, including scores of democratically elected mayors in the country’s predominantly Kurdish southeast, had been arrested since last summer’s failed coup.

In addition to Demirtas, 10 other HDP lawmakers remain in jail, including the party's former co-chair Figen Yuksekdag, all on charges of supporting “terrorism.” Today a court in Diyarbakir sentenced HDP lawmaker Idris Bayulken to 16 years and eight months in prison for “membership of a terrorist organization” and engaging in “terrorist propaganda.” Baluken has been languishing in an Ankara jail since February last year. Kati Piri, the European Parliament's rapporteur for Turkey, took to Twitter to condemn the move. “Devastating sentence and continuation of crackdown on opposition voices,” she tweeted.

Prosecutors are seeking up to 142 years imprisonment for Demirtas. They allege, among other things, that he is a member of the outlawed Kurdistan Workers Party (PKK) and that he incited people to violence during riots in the Kurds’ informal capital, Diyarbakir, in September 2014. The unrest erupted after the government refused to take action against Islamic State militants besieging the Syrian Kurdish town of Kobani. Demirtas denies all the charges.

Demirtas’ sidelining comes as a blow to the Kurdish movement, but paradoxically it may also be something of a boon. With his incisive wit, youthful good looks and powers of persuasion, Demirtas won over Turks and Kurds alike, carrying the HDP into the parliament for the first time in June 2015 parliamentary elections. The success of the former human rights lawyer, however, earned him the ire of Turkey’s current president, Recep Tayyip Erdogan.

Demirtas’ campaign pledge to deny Erdogan the expanded presidential powers that he later secured in a fraud-tainted referendum last year is believed to have kindled such spite in the famously vindictive Turkish leader that it won't go away. While Demirtas’ incarceration has hobbled the HDP, party insiders reckon that his resignation will make it easier to resume frozen peace talks between the government and the PKK should Erdogan decide on that route. Meanwhile, Erdogan appears to be ensconced in his alliance with far-right nationalist leader Devlet Bahceli, making it unlikely that he will reach out to the Kurds any time soon.

Some argue, however, that should the infinitely pragmatic Erdogan decide that he has a better chance of securing a clear victory in the 2019 presidential polls with Kurdish backing, he could well seek the help of imprisoned PKK leader Abdullah Ocalan. Whether he will get it is another matter. “The Kurds have no trust left in Erdogan and will not allow themselves to be manipulated for his personal ambitions only to be discarded again,” said an influential pro-HDP politician who spoke to Al-Monitor on condition of anonymity.

Baydemir, former mayor of Diyarbakir, and Ayhan Bilgen, an articulate HDP lawmaker from Kars province, are being touted as possible successors to Demirtas. Another name in circulation is that of the party whip, Ahmet Yildirim. HDP sources said one thing is for sure: The new co-chair will be male and Kurdish, because the other co-chair is female and Turkish.

In the meantime, Erdogan continues to make bellicose noises about invading Afrin, a Syrian Kurdish enclave in northern Syria that is run by groups affiliated with the People’s Protection Units, a PKK affiliate. The PKK has hit back with embarrassing revelations about the two senior members of MIT, Turkey’s national spy agency, who were snared by the militants in a sensational sting operation inside Kurdish-controlled northern Iraq in August last year. The men were identified as 20-year veterans of the agency.

They were said to have been plotting an unspecified operation against the PKK, allegedly at the behest of MIT chief and top Erdogan confidante Hakan Fidan. Photographs of the pair show a bespectacled man with graying stubble and another with hawkish features and a moustache. Their official ID cards, which were also published, depict them as clean-shaven. The PKK said the two were “safe” and being “treated well.” The Turkish government has not commented.