Can Turkey pull back from brink of civil conflict? 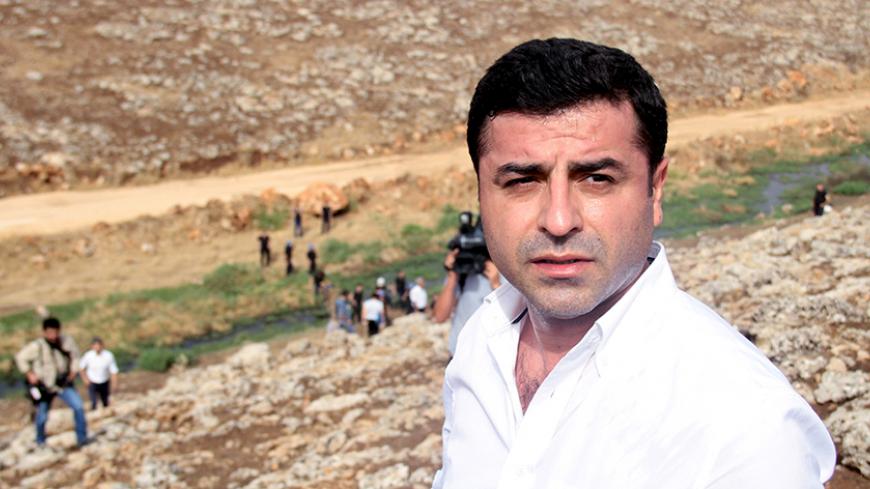 Co-chairman of the pro-Kurdish Peoples' Democratic Party Selahattin Demirtas walks with his party members to the southeastern town of Cizre, in Sirnak province, Turkey, Sept. 10, 2015. Pro-Kurdish politicians, including Cabinet ministers, attempted to march to Cizre that day to protest a week-old curfew there. - REUTERS/Sertac Kayar

"Turkey is on the brink of a civil war.” This is how Selahattin Demirtas, the co-chairman of the pro-Kurdish bloc in the Turkish parliament, the Peoples’ Democracy Party (HDP), chillingly described the spiraling violence that has engulfed Turkey after a two-year cease-fire between rebels of the Kurdistan Workers Party (PKK) and the Turkish army ended in July.

While both sides continue to blame the other for the demise of what promised to be the most hopeful attempt yet at ending the 31-year conflict, the news coming out of Turkey’s mainly Kurdish southeastern region suggests that Demirtas’ rhetoric may not be entirely overblown. Eric S. Edelman, the former US ambassador to Turkey, went as far as to predict in an interview with Al-Monitor that Turkey might even “be sucked into the vortex swirling around Iraq and Syria,” unless the prevailing political dynamics are reversed.

In the southeastern town of Cizre, a city of around 120,000 where Kurdish nationalism pulses forcefully, the Interior Ministry said that 30 people have died in clashes with the security forces since the army moved in over a week ago with tanks and heavy artillery to flush out the PKK’s radical youth wing known as the Patriotic Revolutionary Youth Movement (YDGH).

Only one of the victims was civilian, the ministry said. But HDP lawmakers have contested this claim, saying at least 21 were civilians, including a 35-day-old baby and a 10-year-old girl. Images of the bloodied face of a dead young woman and her wounded infant posted on Twitter are among a steady slew of photographs cataloguing the alleged indiscriminate use of force by the security forces. Arif Arslan, a veteran Kurdish newspaper editor in the southeastern province of Batman, told Al-Monitor in a telephone interview, “It is impossible to verify all the claims because journalists are not permitted to go to Cizre and there is a lot of disinformation. All we know is that ordinary people are suffering horribly.”

Demirtas has warned of a mounting humanitarian crisis as citizens continue to be denied access to bread, water and electricity. Tahir Elci, a prominent human rights lawyer who chairs the Bar Association in the Kurds’ unofficial capital, Diyarbakir, said one resident had sent him a message saying, “We are in very difficult circumstances. We have no potable water in Cizre, no electricity for 7-8 days, our children are going to die, help us please.”

The PKK, in a statement, called on Kurds across the globe to “rise up” in solidarity with the people of Cizre. Demirtas and hundreds of others who camped outside the town have been denied entry by the authorities, who say that the siege will continue until the “terrorists” are driven out.

Meanwhile, in a rare piece of good news, the local governor announced that the curfew in Cizre would be lifted Sept. 12.

News of ordinary Kurds being randomly beaten — one was stabbed to death by a group of men while he stood at a bus stop as he was speaking to his mother on his cellphone in Kurdish — has raised the specter of intercommunal conflict that the country had managed to avert until now. There is much talk of “a return to the 1990s” when the conflict — and state brutality — were at their peak. More ominously still, this time around the war is being waged not so much in rural areas as within towns and cities where the YDGH appears to be deeply entrenched, increasing the risk of civilian casualties. In an interview with Al-Monitor, Aaron Stein, a security analyst who monitors the conflict, said, “The Turkish state will at some point have to move into these areas to retake control. But such an operation will be bloody and reinforce the image among many Kurds that the Turkish military is an occupying force, working in tandem with the AKP to suppress the Kurdish minority.”

In unusually harsh comments, State Department spokesman John Kirby, who condemned the PKK said, “There is no place in a democracy for violent protests, particular those motivated by partisanship or ethnic animosity. [We] expect the Turkish authorities to uphold Turkey’s core values, democratic foundations and universally recognized fundamental freedoms."

The bloodshed shows no signs of abating as the PKK escalates its attacks against military personnel and police alike. Analysts say at least 113 security officers have been killed since July. On Sept. 11, Turkish fighter jets launched a fresh wave of airstrikes against PKK targets inside Kurdish-controlled northern Iraq.

Many worry that parliamentary elections, which are due to be held on Nov. 1, may be called off. As previously noted by Al-Monitor columnists this may well be what the country’s president, Recep Tayyip Erdogan, intended when he reignited the war with the PKK, part of a cynical plan to cement a one-man rule. He may also be trying to shore up nationalist votes in a bid to regain the parliamentary majority enjoyed by the Justice and Development Party (AKP); the AKP was denied this majority by the HDP when Demirtas' party made it into the parliament for the first time as a result of the June 7 elections. Others venture that the PKK is deliberately provoking nationalist ire against the HDP in a concerted effort to undermine the hugely popular Demirtas, who is seen as a challenge to their heretofore unchallenged grip.

But such explanations fail to take into account the broader backdrop against which tensions between the sides boiled over into full blown war. When Erdogan initiated the latest round of peace talks with the PKK’s imprisoned leader Abdullah Ocalan in late 2012, his political ambitions and harnessing Kurdish support for these were surely on his mind. But so, too, were developments in northern Syria where the PKK’s local affiliate, the People's Protection Units (YPG), were making steady gains. Peace as Ankara saw it meant co-opting Ocalan to put the brakes on the Syrian Kurds and get them to fight the Bashar al-Assad regime. But this strategy has clearly failed. The Syrian Kurds have steadily expanded the areas under its control — close to two-thirds of the Turkish border — and are now allied with the United States in the fight against the Islamic State (IS).

And even as the peace talks with Ocalan were underway, the Turkish army was building new security “forts” across the southeast. Turkey’s perceived collusion with IS against the Kurds sharpened their distrust, thus assuring a steady stream of recruits for the YPG and the PKK. The PKK, in turn, was stockpiling weapons inside the country, even as its leaders were talking about pulling out and eventually disarming. At the same time, PKK guerrillas and militias openly mingled with locals in rural areas, planting their flags, often within eyeshot of the army. For Turkey’s generals, this was a step too far, and they are known to have been prodding Erdogan to take action.

Gareth Jenkins, a nonresident fellow at the Washington-based Silk Road Institute who specializes in Turkish affairs, told Al-Monitor, “If this were before 2007 we might have had a coup by now — fortunately we won’t.” This is because the failure of the top echelons to defend their own during the Ergenekon and Balyoz trials — involving thousands of officers, many of them innocent — has had a profound effect on morale. He added, “If the chief of staff were to say 'stage a coup,' a lot of them just wouldn’t move because they’ll say, ‘When we weren’t staging a coup we got banged up in prison for staging a coup when we weren’t.’"

Jenkins reckons that the government is unlikely to call off the offensive against the rebels at least until the elections. And the PKK cannot stop shooting either, according to him, because “if they don’t keep responding, then Erdogan can claim a victory.”

Recent polls suggest that if the elections proceed as planned, the result will be much the same: a hung parliament. Will Erdogan then be ready to cut his losses and allow the AKP to form a coalition? And if not, what is his plan B? Might he devise a way to exclude the HDP or Demirtas, thereby ensuring the sort of parliamentary majority that would cement his executive presidential dreams? Recent developments bode ill. On Sept. 11, prosecutors launched a probe against Demirtas for allegedly inciting violence in Diyarbakir last year that left dozens dead.

Any outcome that disenfranchises Turkey’s Kurds can only deepen instability and accelerate the country’s descent into further violence. As Jonathan Schanzer, a senior analyst and a vocal critic of the AKP at the Foundation for the Defense of Democracies, a conservative Washington-based think tank, put it in an interview with Al-Monitor, “Screwing the Kurds would destroy Turkey. If you try to wipe away their wins it's lighting a match and throwing it on the gasoline that’s leaked all over the country. So I think that’s not something that can be done.” The coming days will reveal whether reason will prevail.