Ocalan silent as Kurds' fight for self-rule rages on

The Kurds fighting in Diyarbakir may end their revolt if ordered to do so by Abdullah Ocalan, but the Turkish government has not allowed the imprisoned Kurdish leader any visitors since April, perhaps calculating that the endless self-sacrifice being demanded of ordinary Kurds will turn them against the PKK. 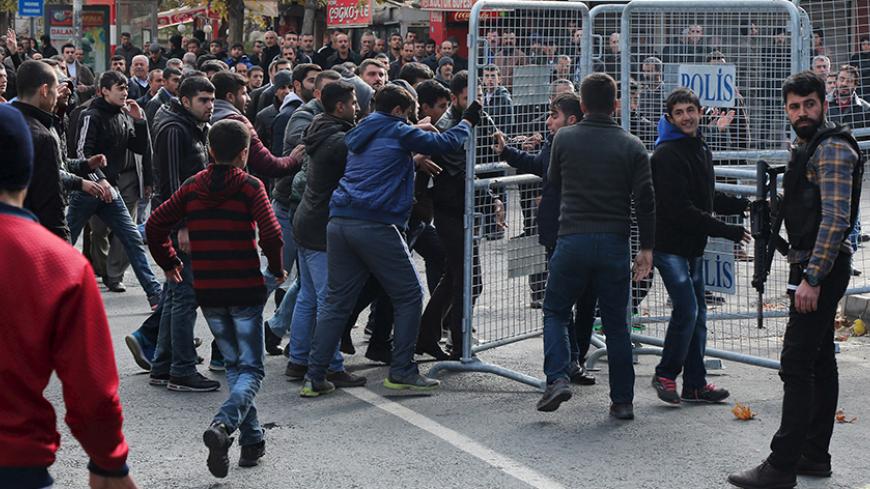 Demonstrators remove security barriers during a protest against the curfew in the Sur district of the southeastern city of Diyarbakir, Turkey, Dec. 14, 2015. - REUTERS/Sertac Kayar

“We will defend our neighborhood till the last drop of our blood, till the revolution in Kurdistan is complete,” one of the youths told an Al-Monitor correspondent in Sur. That was on Dec. 11, when the Turkish authorities briefly eased a curfew that was slapped on six neighborhoods in Sur almost two weeks ago, allowing trapped residents to flee with the few possessions they managed to grab. “We are caught in the war. What else can we do? All we pray for now is peace,” said Remziye Kaya, a mother of six, as she hurried away with a small electrical stove.

Peace seems an increasingly elusive goal ever since a two-year cease-fire between Turkey’s Islamist government and rebels of the outlawed Kurdistan Workers Party (PKK) collapsed in the wake of a deadly suicide bomb attack carried out by the Islamic State (IS) in the town of Suruc. Some 33 peace activists, many of them Kurds, were killed.

The PKK has long claimed that Turkey’s ruling Justice and Development Party (AKP) has used IS to sabotage the Syrian Kurds’ experiment with self-rule in the steadily expanding band of territory they control along the Turkish border they call Rojava.

Conspiracy theories abound as to who reignited the 31-year conflict — the government or the PKK — and why. At this point it hardly matters; the war is swiftly escalating, and the Kurds have raised the stakes like never before.

In a clutch of towns and cities across Turkey’s mainly Kurdish southeast, armed youngsters loyal to Abdullah Ocalan, the imprisoned PKK leader, and calling themselves the Patriotic Revolutionary Youth Movement (YDG-H), have seized control of entire streets and neighborhoods, erecting barriers and declaring autonomy. The spirit of rebellion has permeated Sur, where pro-PKK slogans and posters of the mustachioed Ocalan cover bullet-riddled walls. Several young fighters interviewed by Al-Monitor all said that they would end their revolt only if ordered to do so by Ocalan. But since April 6, the Turkish authorities have not allowed any of his regular visitors, including the Peoples’ Democratic Party (HDP) lawmakers who used to carry messages from him, to meet with Ocalan in his island prison.

The resulting vacuum has been filled by Cemil Bayik, the hard-line PKK commander who says he supports the YDG-H’s moves.

“This is a first, and the unrest could spread to the rest of the country,” warned Ahmet Sumbul, the managing editor of Mucadele, an independent local daily. “Don’t forget there are 5 million Kurds in Istanbul alone and most are young, unemployed and alienated, too,” he told Al-Monitor. Many are the children of the 1.5 million or so Kurds who were forced to flee their villages in the 1990s as a result of the scorched-earth campaign against the Kurds.

Martin van Bruinessen, a respected Dutch scholar and the author of several groundbreaking books on the Kurds, noted in an interview with Al-Monitor, “A few years ago, they were throwing stones at the police; now, a few years older, they carry firearms.” Local sources told Al-Monitor that these weapons are mostly being funneled by the PKK. The YDG-H “don't seem to be particularly afraid of being killed. The current level of state violence is likely to radicalize them even further. Unless the state is willing to kill large numbers of them, this is a war the state cannot win. And it will not be easy to stop the escalation,” van Bruinessen added.

While few believe that the YDG-H can hold the areas under its control indefinitely, its actions are piling pressure on the AKP, which became the first Turkish government to openly negotiate with the PKK and Ocalan. But the government’s refusal to grant the Kurds' demands for political autonomy enshrined in a brand-new constitution lies at the heart of the current deadlock.

Arzu Yilmaz, an Ankara-based academic who studies the Kurds, told Al-Monitor, “The Kurds want to be formally acknowledged as self-governing equal partners and for this new arrangement to be constitutionally guaranteed.”

Her views are widely echoed by PKK commanders and the HDP alike. Hishyar Ozsoy, an HDP lawmaker from Bingol, whose great grandfather, the legendary Sheikh Said, led one of the earliest Kurdish rebellions in 1925, said in an interview with Al-Monitor, “This is not about human rights. This is about collective rights, and nothing short of self-rule will satisfy the Kurds.”

“But the government is stuffing its ears,” he added.

To be sure, the government is growing more hawkish by the day. Round-the-clock curfews are being repeatedly imposed over traditionally restive towns like Silvan, Nusaybin and Cizre.

Some 22 mayors from the pro-Kurdish HDP have been locked up on thinly supported terrorism charges. “Special” police and military teams backed by tanks and armored personnel carriers have laid siege to the “liberated” zones and engaged in bloody street battles in a bid to flush and starve the youths out. They seem to be switching tactics.

“When the state temporarily lifts the curfews, it’s so that civilians can leave,” explained Gultan Kisanak, the fiery co-mayor of Diyarbakir in an interview with Al-Monitor. “The immediate purpose is to have a free hand to crush the youths. The larger goal is to scatter the Kurds, just as they did in the ’90s.”

Her reasoning may well be true and is repeated in public by fellow HDP officials. This in turn places huge moral pressure on ordinary Kurds caught in the crossfire to risk their lives and stay.

“The breakdown of the peace process and willingness of the Turkish government and PKK to bring war to the cities is taking a terrible toll on the Kurdish population,” said Emma Sinclair-Webb, a senior Turkey researcher for Human Rights Watch. “Credible allegations of police ill-treatment are on the rise. The enormous hardships people face under curfews with armed clashes raging — no water, no electricity, no food, no schooling, no medical treatment — mean that people are being driven out of the affected neighborhoods,” she noted in an email exchange with Al-Monitor.

Figures vary, but at least 150 people are said to have died since the violence flared in June. Muharrem Erbey, a respected human rights lawyer and member of the pro-Kurdish Democratic Regions Party, an HDP affiliate, believes that the security forces are responsible for most of the deaths. Reports of torture under police detention are also on the rise. “One of my clients had a truncheon repeatedly jammed up against his anus in a police van. He can barely walk,” Erbey told Al-Monitor in an interview.

The government may be calculating that the endless self-sacrifice being demanded of ordinary Kurds will turn them against the PKK. Meanwhile, Turkey’s Prime Minister Ahmet Davutoglu declared that the security forces would go “door to door” to root the “terrorists” out.

In Sur alone, thousands of businesses have been shut down. “Sur is the commercial heart not only of Diyarbakir but of the entire southeast,” said Shah Ismail Bedirhanoglu, who presides over the Southeastern Industrialists and Businessmen’s Association. He told Al-Monitor, “We are ruined, but it is poor people who are paying the highest price.”

Some HDP officials agree that popular anger is rising. “If there were an election today, the HDP would not make it into the parliament,” Imam Tascier, an HDP lawmaker from Diyarbakir, told Al-Monitor. Yet Tascier insists that the government is to blame for the current impasse, and like the youths in Sur, he believes Ocalan needs to be brought out of his isolation. Bedirhanoglu agrees.

“Ocalan’s silence is sowing confusion in the minds of the HDP and the PKK,” he said. “Above all, the Turkish state has to recognize the Kurds' demands for self-rule. The alternative, Allah forbid, is an all-out civil war,” Bedirhanoglu concluded.