Despite the wide repression their politicians have faced, Turkey's Kurds seem unintimidated as thousands gathered in Diyarbakir to celebrate Nowruz and raise their voices in defiance. 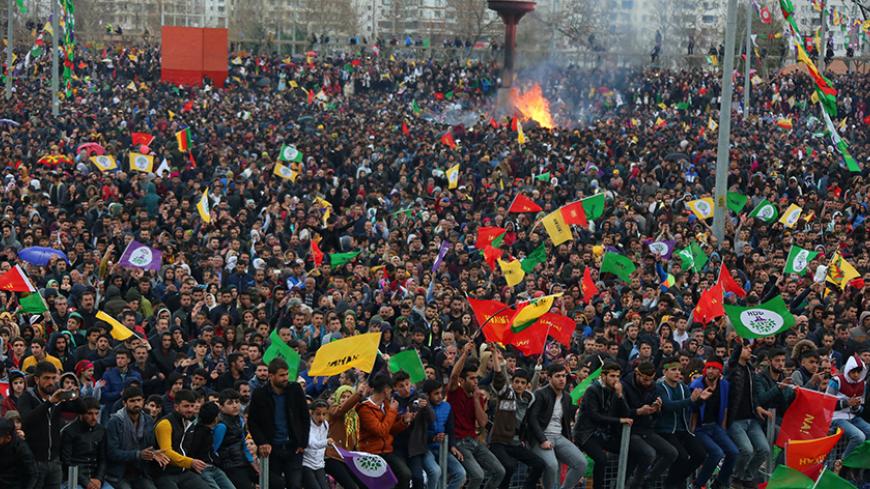 People gather to celebrate Nowruz, which marks the arrival of spring and the new year, in the Kurdish-dominated southeastern city of Diyarbakir, Turkey, March 21, 2017.

Their leaders are in jail, their towns are in ruins and their rights are being suppressed, yet tens of thousands of Turkish Kurds gathered today in a mix of defiance and joy to celebrate Nowruz, the arrival of spring, in their unofficial capital Diyarbakir.

Spurning organizers’ pleas not to provoke the authorities’ wrath, many revelers chanted slogans in support of Abdullah Ocalan, the imprisoned leader of the outlawed Kurdistan Workers Party (PKK) who commands the affection of millions of Kurds across the region. “Free Ocalan, martyrs never die,” the crowds roared. And in a pointed message to Turkey’s President Recep Tayyip Erdogan, they repeatedly shouted “na,” Kurdish for “no,” for how they will be voting in the April 16 referendum on replacing Turkey’s parliamentary system with a presidential one.

Recent opinion polls suggest that over 60% of ethnic Kurds will vote against Erdogan’s bid for what many see as unchecked one-man rule. Naysayers are running neck and neck with the ayes. But pollsters say that the latter were bumped up by Germany and the Netherlands’ refusal to let Erdogan and his lieutenants campaign on their soil. In a recent survey, 53% of those polled said they would vote in favor, and 47% against. The results do not necessarily reflect voters' choices because many naysayers are afraid to reveal their true colors. Apparently, not the Kurds.

Ahmet Sumbul, the managing editor of the local Mucadele newspaper, told Al-Monitor in a telephone interview, “We were stunned by the turnout. With so many party officials in jail, mobilizing a crowd this size seemed unlikely.”

One man who sought to enter the square where the celebrations were being held was shot and killed by police who said he was wielding a knife. Sumbul observed, however, that security forces monitoring the rally had mostly behaved with restraint.

In a fiery address, Ahmet Turk, the doyen of Kurdish politics in Turkey who was recently released from prison on health grounds, said, “Those who threw Kurdish politicians in jail, those who destroyed Kurdistan’s cities, I know that one day they will account for this before history. We say no.”

Turk called on the government to resume peace talks with Ocalan, who had confirmed their commencement in a recorded speech played to a massive Nowruz rally in Diyarbakir in 2013. The talks included, among other things, amnesty for PKK fighters who had not participated in violence and greater autonomy for the Kurds, who account for around 18% of Turkey’s total population. The talks were abruptly shelved in February 2015 just days after government officials and Kurdish lawmakers unveiled a draft road map for peace. Erdogan, a notorious micromanager, claimed he knew nothing about the discussions.

Erdogan was thought to have been unnerved by the Kurds’ gains in northern Syria and calculated that his bid for an executive presidency would be better served by nationalist votes. A two-year cease-fire with the PKK broke down in July 2015, plunging the mainly Kurdish southeast region back into conflict. Since then, at least 2,623 people including 391 civilians are thought to have been killed, according to a recent International Crisis Group tally.

Turk, 74, is among scores of Kurdish mayors who were dismissed, jailed or both on thinly supported terrorist charges over the past year. Diyarbakir’s co-mayors Gultan Kisanak and Firat Anli, who were swept into office with 55% of the vote in 2014, have been in pre-trial detention since Oct. 30, 2016.

The government has seized control of 82 municipalities won by their Democratic Regions Party. Its sister party, the People’s Democracy Party (HDP), has faced similar troubles. Since the July coup attempt, 5,471 HDP officials have been detained and 1,482 sent to pre-trial detention, the party told Human Rights Watch.

Co-chairs Selahattin Demirtas and Figen Yuksekdag as well as 11 other HDP lawmakers are in prison.

Hugh Williamson, the Europe and Central Asia director of Human Rights Watch, said, “The government’s crackdown on pro-Kurdish parties is robbing millions of voters of their parliamentary representatives.”

But it has failed to steal their spirit, as today’s Nowruz festivities showed.