The historic Kurdish breakthrough in Turkey’s parliamentary elections sparks boisterous celebrations across the southeast and boosts hopes for a negotiated settlement of Kurdish grievances. 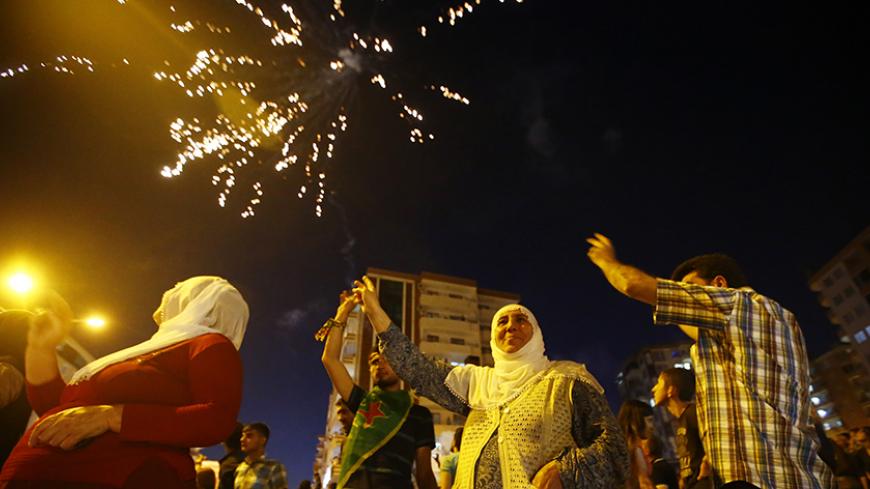 Fireworks explode as supporters of the pro-Kurdish Peoples' Democratic Party celebrate along a street after the parliamentary election in Diyarbakir, June 7, 2015. - REUTERS/Osman Orsal

DIYARBAKIR, Turkey — The gunfire echoing through Diyarbakir could have been mistaken for clashes if it weren’t for the fireworks and the boisterous convoys halting traffic in the streets. The city, the largest in Turkey’s mainly Kurdish southeast, has been the scene of wild celebrations since the evening of June 7, when the pro-Kurdish Peoples’ Democratic Party (HDP) made history by passing the infamous 10% national threshold to enter parliament, boosting hopes for a negotiated settlement of the Kurdish question.

According to preliminary results, the HDP won 80 seats in the 550-member parliament, including 10 of the 11 seats for Diyarbakir, leaving only one to the ruling Justice and Development Party (AKP). The breakthrough came at the end of a tense campaign marred by violence that culminated in two deadly bomb blasts just at the start of the party’s main rally in Diyarbakir on June 5.

But gloom and anxiety dissipated soon after the vote-counting began and the first results were announced. The entire city turned into a festival venue as thousands took to the streets, ignoring HDP calls to stay at voting stations to monitor the counting and thus prevent electoral fraud. The young and old came together, waving flags and touring the city, while others beat drums and danced.

Fevziye Kaya, 75, who lost two relatives who were fighters in the ranks of the Kurdistan Workers Party (PKK), stayed out until 3 a.m. despite her age and ailing husband. “I’m so happy! We celebrated until the morning. My husband’s blood sugar kept going up and down,” she told Al-Monitor.

With the elections the only talk in town, another resident exclaimed, “Diyarbakir turned the political narrative upside down!”

An HDP-organized celebration was held June 8 at a venue outside the city, where Nowruz, the Kurdish new year, is traditionally celebrated. Last week’s bombing prompted tight security measures, but tens of thousands of people — adults and children alike — still packed the venue, in what resembled a second Nowruz this year. “We are HDP, we are going to parliament,” “Biji Serok Apo,” the crowd roared. The second chant, which means “Long Live Leader Apo” in Kurdish, was a salute to jailed PKK leader Abdullah Ocalan, who is affectionately called Apo.

Puffing a cigarette, Vahyettin Ekinci, a retiree, sent a salute also to the many Turks who voted for the HDP to push it across the threshold, underscoring the party’s pledge to embrace pro-democracy forces across the country. He told Al-Monitor, “It is no longer a Kurdish party. It is now Turkey’s party — a party for Turks as well, a party for humanity. This will help a lot the settlement [of the Kurdish question].”

For Benav Butusaba, a shopkeeper, the election outcome was a Kurdish lesson to the AKP, which suffered crushing defeats in previously supportive Kurdish constituencies and lost its parliamentary majority. “The parties that get Kurdish support come to power. And those who betray the Kurds are rejected by the Kurds and lose power. The Kurds responded when the day came. The AKP betrayed us and we brought it down. The settlement process now depends on the Kurds and the HDP,” Butusaba said.

Remarkably, the HDP’s charismatic co-chair, Selahattin Demirtas, the driving force of the party's campaign, was absent from the rally, attending a simultaneous celebration in Istanbul. Like many other revelers, Mustafa Coskun held a Demirtas poster. “I wish the chairman was here as well,” he told Al-Monitor, a bit upset. “But in Istanbul, they too deserve to celebrate. He had to be there.”

Hasret, 19, one of the dozens of people injured in the June 5 bombing, sat in a wheelchair with one foot in plaster and told Al-Monitor that her surname is “Kurdistan” — a symbolic statement of patriotism. “I’m so happy we’ve overcome the threshold. We are now awaiting the reward, we want peace. Peace should be the reward,” she said. "I’ve forgotten all about my pain.”

Speaking at the rally, the HDP’s Idris Baluken, re-elected to parliament from Diyarbakir, said the HDP would send a delegation to the prison island of Imrali to discuss the election outcome with Ocalan as soon as possible. “We cried out that negotiation, democracy and freedom is the only way out. We extended a hand of peace from Kurdistan, and people in Izmir, Antalya and all around Turkey accepted that hand,” he said. “We don’t want any more martyrs, we don’t want to bury more sons. We don’t want to see more coffins [of soldiers] on their way to the west of the Euphrates. Our only demand is to solve the problems in the way they are solved anywhere in the world — at the negotiating table.”

The festivities continued throughout the city even after the rally ended. Boisterous halays (a folk dance in which people form a circle or a long line holding each other’s hands), celebratory gunfire, fireworks and noisy convoys jolted the city late into the night, drawing support on social media.

“Someone stop the Kurds or this halay will go on for five days,” one Twitter user joked. “Did someone discover oil in Diyarbakir and is it being distributed for free? The convoys just don’t stop. Or perhaps the Kurds invented a car that runs on water?” someone else wrote.

Though Kurdish politicians have earlier held seats in Turkey’s parliament, the HDP — created on the advice of Ocalan — is the first party of the Kurdish movement to officially challenge and pass the 10% threshold. Its predecessors, many of which were outlawed, either flopped at the threshold or fielded independent candidates who regrouped under the party banner once in parliament. The first nationalist Kurds entered parliament in 1991 on the ticket of another party, only to be expelled three years later.