Kurds see the case against the Peoples’ Democratic Party as the latest effort to undermine their place in society. 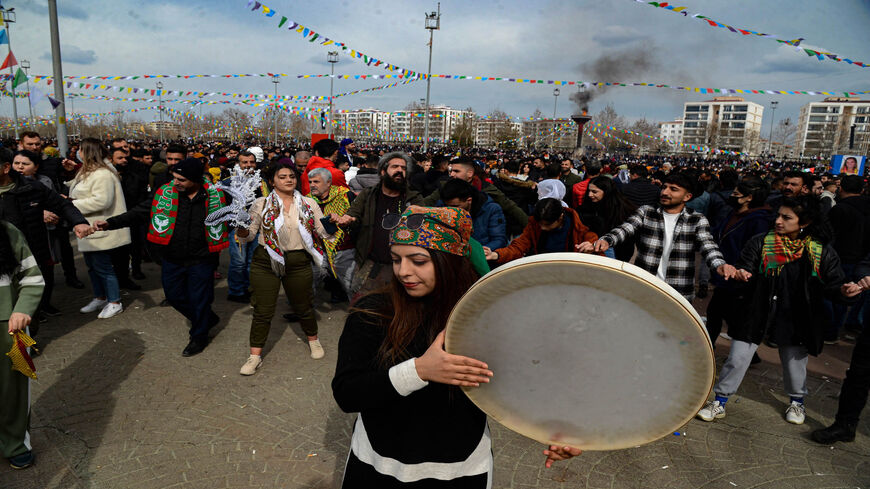 ISTANBUL — As Kurds across Turkey flocked to celebrate the Nowruz spring festival, they did so under the shadow of a court case that threatens to close the political party representing many Kurdish hopes for the future.

Revelers dressed in colorful traditional clothes and waving red, green and yellow flags last week gathered at Nowruz celebrations in the southeastern heartland of Turkey’s Kurds as well as in cities such as Istanbul and Izmir in the west.

The festivities were organized by the Peoples’ Democratic Party (HDP), which in 2015 became the first political party rooted in the Kurdish movement to enter parliament.

For a year now, a court case has threatened to close the party, which currently has 56 deputies in the 600-member assembly, making it the third-largest party. The case before the Constitutional Court also calls for 451 HDP politicians to be banned from politics based on claims of the HDP’s links to the illegal Kurdistan Workers Party (PKK).

It has been widely condemned as politically motivated ahead of elections due next year, although the government says the judiciary is acting independently.

Despite the closure threat, many Kurds remain defiant and see the court case as part of a long-standing drive to stamp out Kurdish identity.

“We are struggling for our country, our language, our culture,” Faysal Yaman, 74, said at the Nowruz celebrations in Diyarbakir, considered the de facto capital of Turkey’s Kurds.

“They just want to put pressure on the HDP and the 20 million Kurds in Turkey but they won’t succeed. We’ve been in these lands for thousands of years and we will endure whatever happens,” he told Al-Monitor. “We want to talk our own language but they don’t let us. They change the names of Kurdish villages to Turkish. We can’t even give our children Kurdish names.”

The HDP’s 2015 victory led to the ruling Justice and Development Party (AKP) losing its absolute majority in the legislature and going on to form an alliance with ultranationalists who have long opposed any expression of Kurdish identity.

A wave of arrests against the HDP followed. Thousands of party members have been imprisoned and elected officials such as city mayors removed from office and replaced with government appointees.

In the vast majority of cases the accused were charged with terror-related offenses, often stemming from political speeches given years earlier.

The government alleges the HDP has organizational links to the PKK, labeled a terrorist organization by Turkey, the United States and the European Union. It launched an armed campaign in 1984, leading to tens of thousands of deaths.

The question of the relationship between the HDP — and the Kurdish-based parties that preceded it — and the PKK is a fraught one.

According to Francis O’Connor, a post-doctoral fellow at Wageningen University in the Netherlands, the political parties and the PKK are “two poles of the Kurdish movement.”

While they are not “structurally integrated” there has “always been a form of relationship between them,” largely because “they both draw on the same reservoir of supporters and reference the same symbolic universe," he told Al-Monitor.

Kurdish politicians acted as a go-between in peace talks between the PKK and the Turkish government in the early 2010s. The HDP has sought to distance itself from PKK attacks, calling on the group to lay down its arms.

At Diyarbakir’s Nowruz festival, however, many young men wore outfits similar to PKK fighters' olive-green fatigues. “The police wouldn’t allow me to wear these [clothes] at the checkpoint but I changed and then hid these to wear when I got inside,” said Amed Kacmaz, 22.

Mehmet Akdemir, 22, wore a colorful waistband with his black attire. “This is the people showing their resistance,” he said of the celebrations. “It is important for our identity as it is the only way we are allowed to express being Kurdish.”

Those attending Nowruz in Diyarbakir passed lines of riot police and many complained of excessive waits at security checkpoints before entering the festival area.

Fadiye Davut said she had traveled from the Kurdish-majority town of Kobani just across the Syrian border. Kobani became a byword for the Kurds’ fight against the Islamic State in late 2014 when it was besieged but fought off jihadi forces.

“I came from Kobani and we were stopped six times by the police and army on the way,” Fadiye told Al-Monitor. “They asked why we were going to Diyarbakir and why we are dressed in Kurdish clothes. They took our flags at the checkpoint.”

Azadi Kaya, whose outspoken support for Kurdish rights has earned him a large social media following, traveled from Ankara.

“The HDP won’t be closed, it can’t be closed,” he told Al-Monitor. “There are millions of people for whom it is a voice as a legal party. We will never give up our voice.

He said, “In my opinion, if they close the HDP more people will go to the mountains and fight for the PKK.”