A crowd of 600,000 turned out to celebrate Newroz and hear a message from Abdullah Ocalan, imprisoned leader of the Kurdistan Workers Party (PKK), in support of Turkish-Kurdish peace talks, Sibel Utku Bila reports from Diyarbakir. 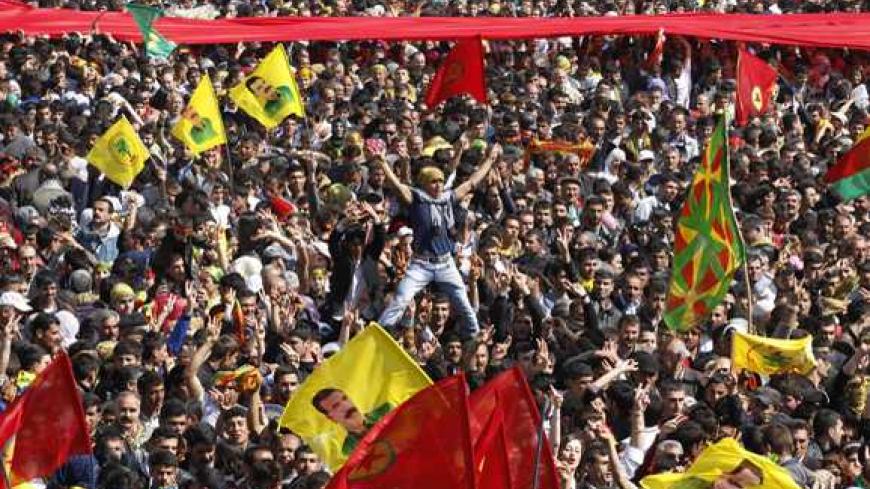 DIYARBAKIR, Turkey — Hundreds of thousands of Kurds rallied here on March 21 in a euphoric show of support for fledgling peace talks between the Turkish government and jailed Kurdish rebel leader Abdullah Ocalan, but a sense of mistrust and belligerence toward Ankara lingered in the festive air.

The huge crowd that packed the venue in Diyarbakir, the largest city of Turkey’s mainly Kurdish southeast, sent out a powerful message re-affirming Ocalan as their leader and endorsing his call on the outlawed Kurdistan Workers Party (PKK) to “silence the guns” and pull out beyond Turkish borders to pave the way for a negotiated settlement.

But what will the Kurds get in return? Ocalan’s letter from prison, read out to the crowd by Kurdish parliament members, spelled out no more than the prospect of a “new era” to unite Turks and Kurds for a common future, based on equality and democracy.

The human sea — estimated at about 600,000 people — erupted into cheers, flashed the V-sign and shouted slogans. Despite no clear promise on what they would gain, revelers remained confident that their decade-old demands and expectations were safe in the hands of the prisoner on Imrali Island.

“He [Ocalan] must have received some guarantees. If this turns out to be a trap and if the process fails, the consequences will be even bloodier than what we’ve seen so far,” 38-year-old jeweler Mucahit Aytac said, recalling the some 40,000 deaths that the conflict has claimed since the PKK took up arms in 1984.

“I’m happy with Apo’s message,” said 48-year-old shopkeeper Mehmet, referring to Ocalan by his popular nickname. “If the armed militants withdraw, there will be no pretext left for the government. We will press even harder for our demands. The ball is now in Ankara’s court,” he said, pointing to Kurdish demands for the release of thousands of political prisoners, Kurdish-language education and regional self-rule.

Behind bars since 1999 on a faraway island in western Turkey, Ocalan was the sole omnipresent and dominant figure at the rally. His portraits adorned the venue and the banners the revelers brandished. Video clips of speeches he made before his capture were broadcast on giant screens. And the crowd shouted no other chant but “Biji Serok Apo,” or “Long live chairman Apo.” A young man took his reverence to extremes, posing to photographers with a bloodied chest, with the name “Apo” inscribed with a razor.

The rally was heavy with symbolism and each detail intended to demonstrate allegiance to Ocalan and the PKK, listed as a terrorist group by Ankara and much of the international community. Activists in charge of order at the venue wore T-shirts inscribed with the slogan “Freedom for the Chairman.” Hundreds of revelers, from children and women to young men and white-bearded elders, arrived clad in khaki military fatigues with baggy pants, the PKK’s hallmark, and brandished the PKK flag.

A dozen young men, again in khaki fatigues and their faces hidden behind checkered balaclavas, lined up on stage to deliver a fervent message of support for the PKK, marching in step and radiating a belligerent air. “Freedom for Chairman Apo – now!” read a banner they displayed. Their spokesman issued a message in support of the peace talks, but warned that the Kurds would not fall into the “traps” of the ruling Justice and Development Party (AKP). The crowd responded by unfurling another banner that read “We are with you in peace and war, Chairman.”

Sitting among the dignitaries in the protocol platform were the parents of slain PKK militants and the 34 young Kurds who perished in a botched Turkish air raid against the PKK at the Iraqi border in 2011.

“People should no longer die — neither on the guerrilla nor the military side. We’ve pinned our hopes on this process. We still mistrust the state, but everybody is looking forward to a settlement this time,” said Nevzat Ozek, whose son was among three PKK suicide bombers who attacked a police department in central Turkey last year.

His wife, Misri, added: “I wish the mothers of Turkish soldiers were here too. We must join hands. One cannot reach anywhere by dying. Enough is enough!”

Beaming with pride, Emine Ozbek recounted how her son, a university student, joined the PKK to fight for Kurdish rights and was “martyred” in a Turkish air raid on PKK bases in the Kandil Mountains in northern Iraq. She opened her hands in a posture of prayer for peace, but doubts lingered in her mind about how sincere Prime Minister Recep Tayyip Erdogan is in his stated commitment to a settlement.

“We are uneasy that we may be fooled. But we are not the old Kurds any more — they cannot fool us this time,” she said. “If they do it again, there will be a bloodbath.”

The rally was organized by the Peace and Democracy Party (BDP), Turkey’s largest Kurdish party seen by many as the PKK’s political wing, as a celebration of Newroz, the Kurdish New Year. The festival, however, has long become a platform for the Kurds to raise political demands and was often mired in violence in the 1990s, the peak years of the conflict. The bloodiest Newroz was in 1992 when clashes between the security forces and demonstrators across the southeast claimed about 50 lives.

This year, the state’s security presence was on a minimal level, intended to illustrate Ankara’s goodwill. Police officers conducted security checks only about a kilometer [0.6 miles] from the venue, while a police helicopter occasionally flew over the area.