Turkey’s Kurds, largely excluded from efforts at national unity after the failed coup, have appealed for reconciliation and revival of talks to end the Kurdish conflict. 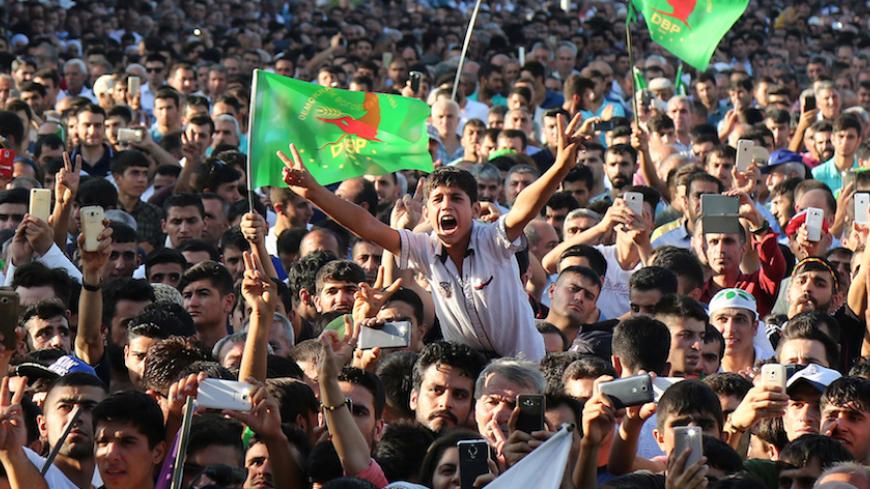 People gather on a main square of the Kurdish-dominated city of Diyarbakir during the "No to Coup! Democracy Now Rally" organized by pro-Kurdish opposition Peoples' Democratic Party, Turkey, July 31, 2016. - REUTERS/Sertac Kayar

DIYARBAKIR, Turkey — Tens of thousands of people flocked to Station Square in Diyarbakir, Turkey’s largest Kurdish-majority city, July 31 for the biggest gathering there since a twin bomb attack bloodied a pre-election rally of the pro-Kurdish Peoples’ Democratic Party (HDP) last year. For the first time since the deadly attack, the HDP held a rally at the venue to denounce the July 15 coup attempt, but to also warn Ankara against straying from the path of democracy.

Months-long clashes between Kurdish militants and the security forces have left Diyarbakir a wounded city, with the HDP ostracized and snubbed by the government in Ankara. Still, rally-goers vocally condemned the coup bid against President Recep Tayyip Erdogan and the ruling Justice and Development Party (AKP), brandishing banners that urged both “democratic resistance” against the coup and “radical democracy” in its aftermath.

With enthusiasm written all over his face, rally-goer Nevzat Ozgen told Al-Monitor, “Lending a shoulder to the democracy camp and being part of it is a duty for anyone who calls himself a human. I’m here to say no to coups and wars in our region. I’m here in the name of democracy, freedoms, humanity and living [peacefully] side by side.”

The aftermath of the failed putsch has seen daily anti-coup rallies across Turkey, and the toxic climate between the AKP and the opposition has thawed to some extent amid universal condemnation of the coup. The HDP, however, has been excluded from a number of initiatives to forge national unity, including a meeting Erdogan convened with opposition leaders in his palace and a big rally scheduled for Aug. 7 in Istanbul. Similarly, Erdogan has withdrawn libel cases against people accused of “insulting” him, excluding HDP members.

Nevertheless, the HDP and the Kurds have taken to the streets to denounce the coup attempt. The string of rallies began in Istanbul July 23 and continued in the Kurdish-majority southeast, with the largest one in Diyarbakir.

HDP leaders attending the July 31 rally called for the revival of peace talks to resolve the Kurdish conflict and an end to a ban on visits to Abdullah Ocalan, the leader of the Kurdistan Workers Party (PKK) who is serving a life sentence on the prison island of Imrali, not far from Istanbul.

“Imrali’s isolation should end and a true peace process should resume. Our calls regarding Ocalan’s isolation are not propaganda, but a call for a settlement,” HDP co-chair Selahattin Demirtas said, as many in the crowd chanted slogans praising Ocalan, who was reportedly on the assassination list of the putschists.

Demirtas stressed that standing up against the coup did not amount to supporting the AKP but “support for the struggle for democracy and the people’s yearning for freedom.” He warned Erdogan and the ruling party against using the putsch as a pretext to clamp down on opponents and build a “one-man rule.”

“One does not become a democrat by opposing coups only. One has to also advocate first-class democracy with no strings attached. We are against coups, but we are also against dictatorship and the government’s repression,” Demirtas said.

Turkey, he stressed, is at a critical juncture with “an historic opportunity” for national reconciliation on one side and a “minefield” down the road of more conflict on the other.

“Turkey’s people have united against the coup, which is great. But how are we going to build on this unity? That’s the critical point. A historic opportunity will be squandered if the AKP stoops to slyness and cheapness to [exploit this unity] … to build its own one-man rule,” Demirtas said.

“The second path is to put Turkey on the course of settlement, democracy and peace. The two paths are very much distinct, and which one is taken will become clear in the imminent hours and days,” he said. “We are against coups, but we are not as naive as to keep silent about the AKP’s mistakes. That’s why we’ve taken to the squares.”

Demirtas lamented that the HDP rallies had been ignored in the media, saying, “You speak of a democracy festival, but while you broadcast your own rallies live on dozens of channels, you don’t even briefly mention the HDP’s rallies in the evening news.” The Diyarbakir rally was also largely ignored by the media, barring Kurdish outlets.

At his next rally in Van the following day, Demirtas reiterated concerns over Ocalan’s well-being and pressed Ankara to allow visits. Addressing both the AKP and the two fellow opposition parties in parliament, Demirtas warned against a post-coup alliance to “crush” the HDP. “Don’t confuse us with the Gulen community and the crazed murderers [who attempted the coup],” he said. “Our cause is a legitimate one. We want our rights. Come to your senses and respond to our peace calls so we can take this state to safety together.”