The election strategy of a small, fledgling Kurdish-socialist party may have a disproportionate impact on local polls next year and sway Turkish politics. 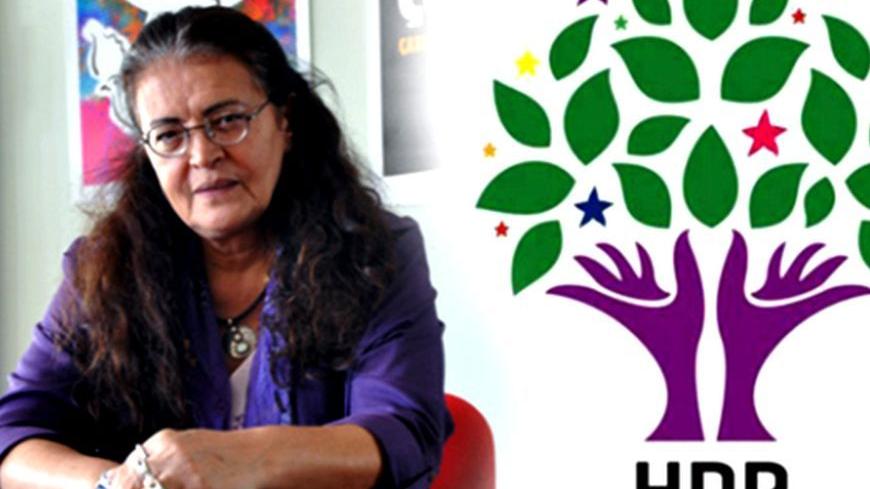 Fatma Gök is the co-president of the Peoples’ Democratic Party (HDP), a new leftist party. - rojavareport.wordpress.com

At a party convention in Ankara on Oct. 27, participants shouted intriguing chants. One of them — “Everywhere is Taksim, everywhere is resistance” — was the hallmark slogan of the protests that broke out in Istanbul on May 30 over the cutting of trees at Gezi Park and then spread nationwide.

Do the chants, shouted at the convention of the Peoples’ Democracy Party (HDP), indicate that a party is emerging to fill Turkey’s “democratic opposition” vacuum, which the Gezi protests themselves had underscored? A party that has allocated a 10% quota for LGBT individuals and a 50% quota for women, could the HDP have a say in Turkey’s future? To find the answers, let’s first see how the HDP was born.

Abdullah Ocalan, the Kurdistan Workers’ Party (PKK) leader serving a life sentence on the prison island of Imrali, had long called for an umbrella party to bring all leftist movements in Turkey together. He reckoned that the Peace and Democracy Party (BDP), which is currently represented in Parliament and over which he wields an undisputed moral authority, appealed only to the Kurds and confined itself to the southeast, failing to make a nationwide impact. In his view, an umbrella party could fill what he saw as a big void on the left flank of Turkish opposition.

Ocalan’s call yielded its first result during the 2011 general elections, when the BDP aligned with some 20 socialist parties and movements to form the Labor, Democracy and Freedom Bloc. The coalition managed to win 36 parliamentary seats and then united under the roof of the HDP. At its Oct. 27 convention, the party ushered into a new phase, electing Ertugrul Kurkcu, a prominent Turkish socialist, and Sebahat Tuncel, a leading figure in the Kurdish movement, as co-chairs.

Despite its diverse and pluralist outlook, a series of handicaps are likely to stand in the HDP’s way in reaching out to the wider masses. The first and foremost is Ocalan’s shadow over the party. His clout is so tangible that all steps on the most strategic issues are taken according to his directives. For instance, Tuncel and Kurkcu were known to be his favorites for co-chairs and both were duly elected at the convention. Since Turkish law bars the concept of shared chairmanship, Tuncel became the official chairwoman, while Kurkcu the informal co-chairman. Both had resigned from the BDP shortly before the convention to join the HDP.

In line with another of Ocalan’s wishes, a dual strategy is being drawn up for the municipal elections in March 2014. Under the plan, the BDP will be the umbrella party in the polls in the Kurdish-majority southeast, while HDP candidates will be backed in the other parts of Turkey. The ramifications of this strategy are likely to be of critical significance for the country’s political climate.

Before a brief overview of those ramifications, it is worth noting that not all Kurds are happy with the HDP’s arrival on the scene. For instance, BDP lawmaker Altan Tan, a conservative-religious Kurd, argues that the HDP stands no chance of growing into a mass party. “The colleagues involved in this endeavor confined themselves to the marginal left in Turkey. A large portion of this marginal left is at odds with religion and Islam. And neither Kurdish Islamists nor Turkey’s Muslims in general are favorable to them. Even some liberal quarters are on bad terms with that marginal left. So, the HDP project, which was supposed to embrace all liberal democrats, Muslim democrats and the majority of the Kurdish people, has shrunk into a project limited to the marginal Turkish left,” Tan says.

Indeed, the HDP appears doomed to remain “marginal,” to use Tan’s description, but nevertheless it could still make a significant impact on national political balances depending on certain developments, including the coming municipal elections.

The vote in Istanbul will be of key importance. Istanbul is Turkey’s largest city and Prime Minister Recep Tayyip Erdogan himself is one of its former mayors. The winner of the metropolitan mayorship race in the city and even the shares the parties will grab from the vote could sway the general elections the following year. The Istanbul Metropolitan Municipality is an Achilles Heel for Erdogan and his Justice and Development Party (AKP). A defeat in the municipal polls could have fatal political consequences.

The candidate the main opposition Republican People’s Party (CHP) is planning to field in the metropolitan mayorship race is Mustafa Sarigul, the incumbent mayor of Istanbul’s Sisli district who enjoys great popularity in the city. The CHP will likely try to unite the whole opposition behind him.

Keen to prove itself, the HDP, for its part, is expected to field Sirri Sureyya Onder, another well-known figure who is currently a BDP parliament member for Istanbul. A movie director and a writer, Onder also enjoys significant popularity in Istanbul. He was at the forefront of the struggle to save the trees at Gezi Park and became an iconic figure in the protests.

Some observers argue that Onder’s candidacy would greatly jeopardize Sarigul’s chances of winning and even guarantee the re-election of incumbent AKP mayor Kadir Topbas, whose popularity has taken a blow from the Gezi protests. Others, on the contrary, believe that Onder would prune mostly the AKP vote thanks to personal traits that appeal also to the conservative electorate.

No matter how things unfold, the HDP’s strategy at the municipal polls is likely to have a serious, nationwide impact. And what this colorful party will contribute to Turkish politics of its own is a matter for the long run.