The pro-Kurdish People's Democratic Party hopes the March 31 municipal elections will repudiate the government’s removal of its officials from local offices, but President Recep Tayyip Erdogan has warned that he reserves the right to do so again. 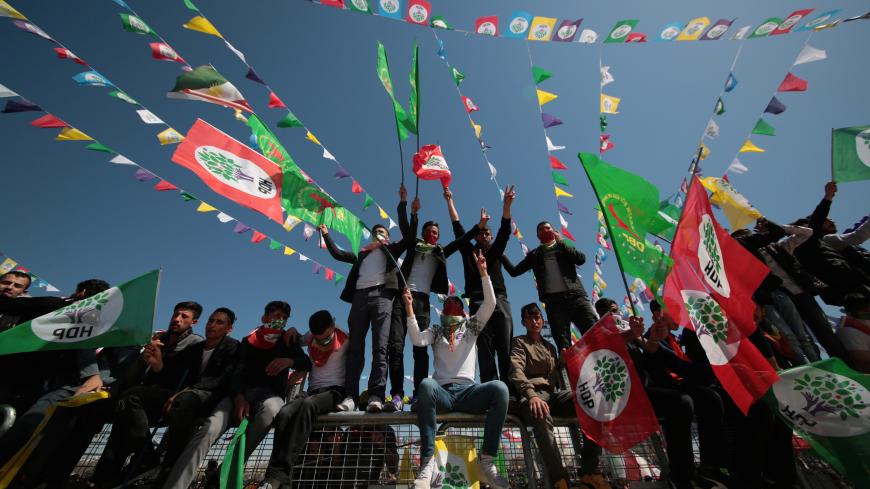 People wave pro-Kurdish People's Democratic Party flags during a gathering to celebrate Newroz, which marks the arrival of spring and the new year, in Diyarbakir, Turkey, March 21, 2019. - REUTERS/Sertac Kayar

ISTANBUL — Turkey’s Kurds rang in their traditional new year on Thursday while bracing for a critical election this month that the region’s biggest party hopes will deliver a clear rebuke against the government’s crackdown on its political movement.

The leftist Peoples’ Democratic Party (HDP), whose base is overwhelmingly Kurdish, is seeking to recapture control of cities across the predominately Kurdish southeast in the March 31 poll after the government removed 94 of its 102 mayors from their offices beginning in 2016 and replaced them with government-appointed “trustees.”

Beyond the southeast, the HDP has decided against fielding mayoral candidates in several cities, hoping its supporters will instead back the main opposition bloc to help it wrest control of municipalities like Istanbul and the capital Ankara, which has been dominated by President Recep Tayyip Erdogan’s Justice and Development Party (AKP) and its predecessor since the mid-1990s. The AKP has formed an alliance with the right-wing Nationalist Movement Party (MHP).

The HDP strategy comes as thousands of its party activists and elected officials sit in jail on charges of aiding Kurdish militants in the wake of the government’s failed peace process to end a three-decade insurgency. With the end of talks in 2015, Turkey was thrust into one of its most violent periods, with almost 3,000 people killed in clashes between the Kurdistan Workers Party (PKK) and Turkish security forces.

With relative peace restored, tens of thousands of people gathered in a field on the outskirts of Diyarbakir, the largest city in the predominantly Kurdish southeast, to celebrate Newroz, which marks the arrival of spring on March 21. Despite a large security presence, the atmosphere was jovial as groups of teenagers danced in circles while the traditional Newroz bonfire was lit, a witness told Al-Monitor.

In a speech to the crowd, Pervin Buldan, the HDP’s joint chairwoman, called on Erdogan to respond to their call for peace. “We are telling you that these people will not abandon peace or democracy,” she said. “We are going into these elections opposed to those who do not recognize the will of the people, who try to usurp that will with trustees.”

But Erdogan has already warned that he will remove elected mayors and appoint trustees to run cities if elected officials are found to be aiding militants. “If my citizens give you the opportunity to take back these municipalities and you send the resources the state provides to these cities to Qandil or use them for terrorism, I will immediately once again appoint trustees without hesitation,” Erdogan told a campaign rally last month. Qandil is the mountainous region in northern Iraq used as a base by the outlawed PKK, which has waged a decades-long armed campaign for autonomy within Turkey.

The HDP rejects charges it has links with the PKK and argues it is seeking greater cultural rights for Turkey’s estimated 16 million Kurds and a negotiated resolution of the conflict. But it does not call the PKK a terrorist group, despite Turkey’s official stance, and acknowledges that it shares some of the same base with the militants.

The government tapped the HDP to help it negotiate peace with the PKK, and in 2013, Newroz in Diyarbakir was the scene of a historic cease-fire declaration by the PKK. The two-year lull in violence helped bolster the HDP’s popularity beyond Kurdish voters and by 2015, it became the second-biggest opposition party in parliament.

The HDP’s decision to tacitly support the opposition coalition — comprised of the center-left Republican People’s Party (CHP) and the nationalist Good Party — could help push the bloc to victory in tight races in cities with large Kurdish populations. Istanbul is home to two million Kurds, by some estimates.

The alliance is a veiled one, with the CHP and Good careful not to advertise it and risk alienating nationalist supporters who view the HDP with suspicion. Bloomberg News reported that the HDP is seeking seats on municipal councils in return for its support. Still, the CHP and Good face accusations from Erdogan that they are partnering with “those who want to divide our country.”

It also marks a break, for the time being, in the HDP’s strategy to expand its support beyond Kurds and attract leftist voters from across the country with its progressive platform on gender equality, environmental protection and respect for minority rights.

“The HDP’s decision not to run candidates in some areas was a smart tactical move. It doesn’t indicate the party is abandoning its goal of being a Turkey-wide party. What it shows is that the HDP views AKP as such a threat to Turkey’s democracy and as a block to Kurdish rights that the goal of weakening the AKP’s hold nationwide is a priority for HDP,” said Aliza Marcus, the author of “Blood and Belief,” a history of the PKK.

The HDP has also sounded an alarm about electoral irregularities in the southeast, including voter registries with fake names, and says that thousands of security officers sent to the southeast could intimidate voters. This week, authorities raided an HDP campaign office in the town of Adana near the Mediterranean coast and arrested 12 party officials on suspicion of financial improprieties.

“Amid all of the pressure we face and the attacks on us, we are aware this is not a fair election campaign,” Buldan told a news conference last month. “We have two aims in this election. The first is to win back the cities where trustees have been appointed … Secondly, the goal before us is to help force the loss of the AKP-MHP bloc in Turkey’s west.”

Selahattin Demirtas, the HDP’s popular former chairman who has been in prison for more than two years despite a European Court of Human Rights judgment he must be freed, has also urged supporters to rein in the AKP and MHP. Eight other HDP lawmakers, 68 mayors and as many as 7,000 HDP activists are in prison on charges of abetting terrorism.

Now, the HDP hopes to clinch cities like Diyarbakir with a wide enough margin to discourage the central government from taking over the municipalities again. Marcus said the election could even offer Erdogan a chance to work with the new mayors to repair relations with disaffected Kurds.

“At this point, based on his behavior and speech, it seems more likely he will look for ways to remove the mayors, and he doesn’t need the excuse of violence to do this. There will be always something he can use against them — in the polarized atmosphere that exists in Turkey today, it’s very easy for the state to find some reason to accuse a Kurdish politician of a crime,” she said.

Some voters in the southeast believe that Erdogan’s threat to kick out newly elected HDP officials will probably backfire if he hopes it would cool support for the party. “It’s an effort to frighten voters, but by singling out the HDP, Erdogan has made it a victim and that encourages even its critics support it,” Sidki Zalan, a lawyer and conservative activist in Diyarbakir, told Al-Monitor.

Normally, Zalan might not vote for the HDP over differences in philosophy and policy. This time he will, he said, “because Diyarbakir should remain in Kurdish hands.”