The pro-Kurdish Peoples’ Democratic Party will meet constituents to decide on how to counter a clampdown that has seen it lose control of two dozen city halls. Quitting parliament is among the measures up for debate. 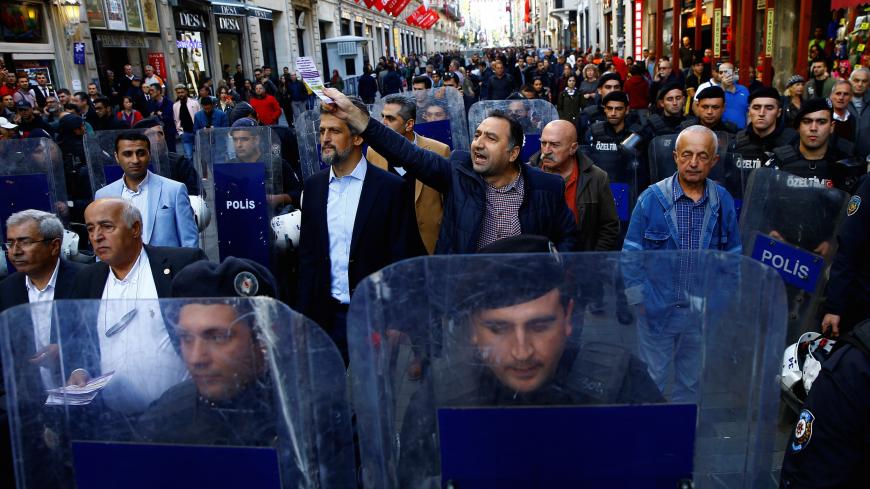 Pro-Kurdish Peoples' Democratic Party (HDP) lawmakers walk along Istiklal Street as they are surrounded by riot police during an event to announce their upcoming party congress, in Istanbul, Turkey, Nov. 2, 2019. - REUTERS/Huseyin Aldemir

ANKARA — Authorities are intensifying a crackdown on Turkey’s second-biggest opposition party, sacking two dozen of its elected mayors and forcing it to consider withdrawing from parliament and the municipalities it controls to potentially trigger by-elections.

The purge coincides with a military operation Turkey launched in neighboring Syria last month to attack a Kurdish militia that had fought alongside US troops to defeat the Islamic State. The incursion has stoked nationalist sentiment and has deepened animosity toward Kurdish political actors at home.

The left-wing Peoples’ Democratic Party (HDP), whose base is predominantly Kurdish, will meet with constituents on Wednesday to discuss its response to the dismissals, including calls from supporters for "sine-i millet," or returning to the "bosom of the nation” by collectively leaving political posts, HDP party spokesman Gunay Kubilay told reporters.

“We are not engaged in a speculative debate about whether or not to quit the municipalities and parliament. This is not a personal matter nor just the HDP’s problem. This decision requires input from the HDP’s more than 6 million voters,” he said on Nov. 15.

The drastic measure could throw Turkish politics into turmoil. The HDP’s 62 lawmakers in the 600-seat legislature constitute 10% of seats. The Turkish Constitution mandates that a decision for a by-election can be taken if the number of empty seats reaches 5%.

The debate comes after 24 HDP mayors in towns and cities across the mainly Kurdish southeast have been dismissed since August. They all won their elections in March when the HDP took 65 municipalities, but they were later accused of links with the outlawed Kurdistan Workers Party (PKK). Fourteen of the mayors, including Adnan Selcuk Mizrakli, who was mayor of the region’s biggest city of Diyarbakir, have been jailed.

The government has appointed its own trustees to run the municipalities, effectively rendering millions of people without electoral representation at city hall. The female mayors in the towns of Mazidagi, Savur, Derik and Suruc in two provinces along the Syrian border were the latest to be stripped of their posts over the weekend.

“This is political engineering … an effort to liquidate the Kurdish political movement and pro-democracy forces,” Saruhan Oluc, an HDP lawmaker, said in an interview earlier this month. The government “is saying, ‘We do not recognize votes cast by the Kurdish people unless they vote for whom we want.’ But the people do not accept this coercive trampling of their will. It will backfire.”

HaberTurk newspaper reported most of the party leadership in Ankara does not think collective resignations are the best remedy at this stage. The HDP has faced a series of punitive measures since 2015 when it won parliamentary seats for the first time as a party and briefly deprived President Recep Tayyip Erdogan’s Justice and Development Party of single-party rule for the first time since 2002. Within weeks, a peace process with the PKK collapsed, and Erdogan has only consolidated his power further.

Selahattin Demirtas, the HDP’s charismatic former chairman and Erdogan’s rival for the presidency, has been in prison for three years, along with six other former parliament members and thousands of party activists. Scores of Kurdish civil society groups and media outlets have been banned.

A dozen or so current HDP lawmakers face criminal prosecution for political statements they have made and risk being removed from parliament, Oluc said.

The HDP is the only party in parliament to oppose the Turkish army’s incursion into northern Syria, which has thwarted Syrian Kurds’ aspirations of self-rule in the area that they administered, backed by American firepower until President Donald Trump acquiesced to Erdogan’s demands to pull out US troops in October.

Turkey says the Kurdish-dominated Syrian Democratic Forces are an extension of the PKK, which is listed as a terrorist group by the United States and the European Union. It fears that Syrian Kurdish autonomy will rekindle separatism among its own, far larger population of Kurds, who have suffered under a three-decade insurgency waged by the PKK at the cost of 40,000 mainly Kurdish lives.

Russia and the United States both negotiated cease-fires with Turkey in northeast Syria, and without military operations to rally nationalist support, the government may be reviving its clampdown on the HDP to stir it, said Burak Bilgehan Ozpek, a political science professor at TOBB University in Ankara who also runs Daktilo1984, a website featuring essays by liberal thinkers.

“Had the operation continued, perhaps there wouldn’t have been as great a need to remove the mayors because the operation had inflamed nationalism. As long as Turkey can’t be active in Syria, it will create its own enemies at home,” Ozpek told Al-Monitor.

Turkish officials insist the restrictions are lawful and necessary to fight terrorism. “We will never allow for those who use democracy as a Trojan horse,” Interior Minister Suleyman Soylu told reporters in August after the first three mayors were replaced. “At a time when Turkey is fighting terrorism, we cannot permit PKK partisanship committed under the guise of an election. We are fulfilling our responsibility under the law” by removing the mayors, Soylu said.

Critics point out that the sacked mayors are removed before they are convicted of any crimes and the government is ignoring a requirement for city councils to vote for their replacements. All of the mayors were required to pass security checks and were approved as candidates by state electoral officials before the March poll.

The HDP denies outright links with the militants. It advocates for a negotiated settlement of the conflict, something Erdogan has ruled out since peace talks broke down four years ago. Since then, the president has sought to depict the HDP as the political arm of the PKK, and on Nov. 19 he said, “The HDP is backed by the PKK.”

The European Union has murmured its misgivings over the dismissals, saying in September the sackings “deprive voters of political representation at the local level and seriously risk damaging local democracy.”

“Rather than strengthening the HDP to make the Kurdish problem a political one, it is a national security issue [because] the government derives its power from its fight against terrorism,” Ozpek said, adding, “It makes the PKK the representative of the Kurdish people, [and then] it isn’t required to tackle the broader issues of democratization.”

The government first began sacking HDP mayors in 2016 after the PKK renewed its armed campaign. Before the March municipal elections, Erdogan warned voters against supporting the HDP, promising he would again remove them.

Some of the mayors said they had found evidence that the civil servants appointed after the earlier expulsions had spent public funds lavishly, racking up millions of dollars of debt. Oluc said the latest wave of dismissals is in part retaliation against the HDP for exposing corruption.

Oluc also said the measures are aimed at sowing divisions among the opposition, which joined forces in the municipal elections to defeat Erdogan’s party in the capital city of Ankara, the largest city of Istanbul and a string of other cities. Without Kurdish voters, the main opposition Republican People’s Party (CHP) is unlikely to have won several of those races, and many are now disappointed that the CHP has not spoken out more vociferously in the HDP’s defense, he said.

“But our voters remain cognizant that if this administration is going to change, it has to come from a unified democratic struggle,” Oluc said, signaling that the political alliance is not over. A poll last month showed three-fourths of voters opposed the appointment of trustees to their municipality.

For his part, CHP chairman Kemal Kilicdaroglu said Nov. 19 that the dismissals of the HDP mayors amount to “invalidation of the votes cast in the ballot box. This is wrong. We must be mindful on the matter of democracy.”