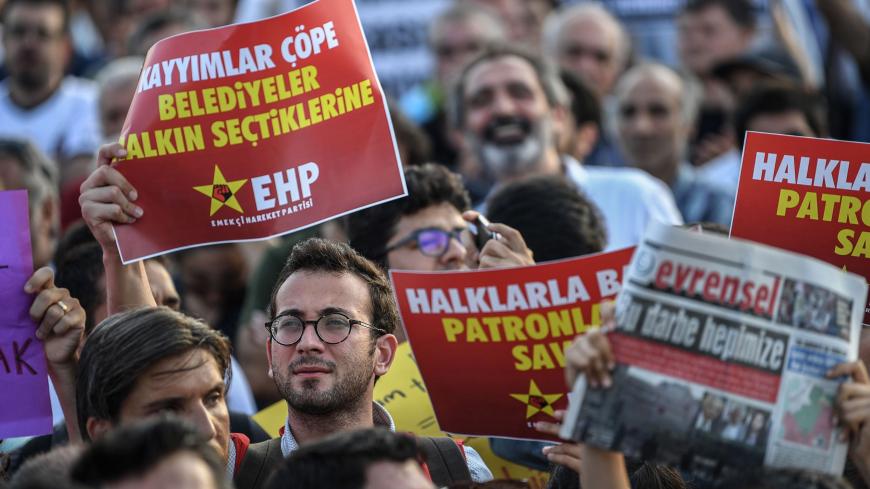 Demonstrators hold placards during a protest against the replacement of Kurdish mayors with state officials in three cities, in the Kadikoy district of Istanbul, Aug. 23, 2019. - OZAN KOSE/AFP/Getty Images

The developments bring the total number of HDP mayors detained and removed from office to 12 since the March 31 municipal elections, increasing pressure on the party and raising concerns democratic representation is being suppressed in the nation’s Kurdish-majority southeast.

“Turkey is waging a war on both sides of the Turkish-Syrian border,” Hisyar Ozsoy, deputy co-chair of foreign affairs for the HDP, told Al-Monitor. He went on, “While they are attacking Kurds in Syria, trying to undermine the possibility of autonomous Kurdish self-administration, they are simultaneously increasing the pressure on Kurdish politicians at home here in Turkey, so these are two sides of the same coin.”

The detained officials have been charged with making propaganda for and membership of the Kurdistan Workers Party (PKK), which state officials claim is closely linked to the HDP political structure. While most allegations stem from the prosecuted mayors’ past activities, human rights advocates have questioned the timing of their detention as Turkish forces conducted an offensive on PKK-linked groups in Syria.

“No doubt the Turkish authorities will claim these are all individualized processes, each one is being considered separately, but the fact that you do this all at once raises the concern that this is politically motivated, that there is one intent behind this to get rid of democratically elected mayors,” Emma Sinclair-Webb, Turkey director for Human Rights Watch, told Al-Monitor.

The case against Mizrakli, a former surgeon who was suspended on Aug. 19 with two other HDP mayors, has gained particular attention. The former chair of the Diyarbakir Medical Association is charged, among other activities, with allegedly treating PKK militants during his medical practice of 23 years.

“In the media, there’s been a smear campaign against him,” Sinclair-Webb told Al-Monitor. “We often see in Turkey that this provides the background for people getting detained. First it’s the smear campaign and then they get detained. That’s a repeated pattern.”

Speaking on Oct. 22, the leader of the main opposition Republican People’s Party (CHP), Kemal Kilicdaroglu, criticized the crackdown on HDP officials while addressing members of parliament.

“The dismissal of mayors and the appointment of trustees in their place is contrary to democracy,” Kilicdaroglu said. “One of the first rules of justice is democracy, respecting the will of the nation.”

With the ongoing Syria incursion, which is backed by CHP officials, some HDP officials have claimed Operation Peace Spring was a calculated move to once again divide the opposition parties that had united to defeat AKP candidates in the spring elections.

“Fighting a war in north Syria always means fighting a war at home,” Ozsoy told Al-Monitor. “This whole invasion involves reshaping domestic politics, and Erdogan has done that by bringing in CHP into this war bloc, undermining the coalition that was established before the Istanbul and local elections.”

The HDP was the sole party in the Turkish Parliament to oppose the Syrian incursion and it has come under increased scrutiny as a result. Prior to the operation, family members of people who have allegedly joined the PKK gathered in protests outside the HDP headquarters in Diyarbakir. The protests have turned up pressure on the party, diverting attention from other protests in Diyarbakir against the removal of the city’s mayor.

Since 2016, more than 5,000 members and administrators in the HDP have been detained, prosecuted or jailed, according to party officials. Ozsoy said an equal number of party members have fled abroad due to ongoing legal cases.

“There is already tremendous pressure on the HDP and it seems they are going to continue with this,” Ozsoy told Al-Monitor. “The idea is to make HDP totally dysfunctional in this process so we can’t even enter the elections.”