Another pro-Kurdish mayor replaced as detentions continue in southeast Turkey

Police detained more than 50 people on alleged terror links in southeast Turkey a day after yet another mayor with the People's Democratic Party was replaced with a state-appointed trustee. 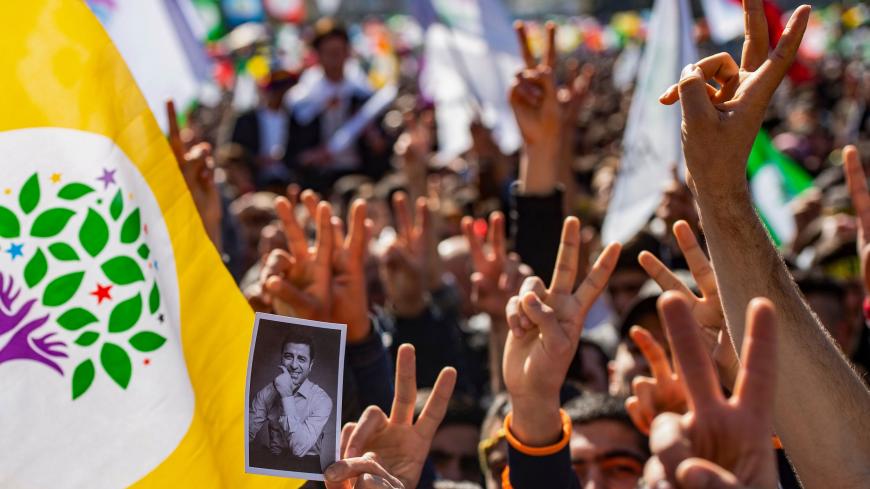 Supporters of Turkey's main pro-Kurdish People's Democratic Party cheer during a campaign rally in Istanbul on March 24, 2019 ahead of the March 31 local elections. - YASIN AKGUL/AFP via Getty Images

According to the state-funded Anadolu news agency, the suspects, most of which are women and include Free Women Movement spokesperson Ayse Gokkan and journalist Ayse Guney, are charged with having links to the outlawed Kurdistan Workers Party (PKK), which has been waging a decades-long insurgency against the Turkish state.

The detentions took place a day after Betul Yasar, HDP co-mayor for Diyadin in Turkey’s Agri district, was taken into custody and replaced by a state-appointed trustee Monday. Following Yasar’s detention, trustees have been appointed to 47 of the 65 municipalities won by the HDP in the March 2019 municipal elections, in which an additional six elected HDP mayors were denied the mandate to govern.

The developments come as HDP members and supporters continue to face pressure from Ankara lawmakers, who claim party affiliates have ties to the PKK. In a statement Tuesday, HDP representatives said the ongoing detentions were undermining democratic principles and amounted to “political genocide.”

Ayse Acar Basaran, an HDP deputy and spokesperson for the party’s Women’s Council, noted the detention of leading women’s rights activists is taking place as Ankara lawmakers debate withdrawing from the Istanbul Convention, which was designed to combat violence against women.

“These detentions are measures to prevent women's opposition to these debates,” Basaran told Al-Monitor. “This is what happens when hostility toward Kurds combines with hostility against women.”

She added, “Turkey violates the international conventions it's party to every day. The silence of international the audience results in more brutal crackdown by the AKP government," Basaran said, using the acronym for Turkey’s ruling Justice and Development Party.

Arrest warrants were issued for 33 people in Diyarbakir and 23 were taken into custody at the time of reporting. Additional arrest warrants were served in Gaziantep and over 50 people were detained in both districts Tuesday, according to the HDP statement. Lawyers working on the cases could not immediately share details on the prosecutions as the charges remain sealed under state security laws.

“The decisions by [Turkey’s] Ministry of the Interior are based on state of emergency-rooted legislation, which allows for replacement of elected mayors by government officials,” the Commission stated. “They undermine the very nature of local self-government and also should be repealed.”

The HDP’s former co-chair Selahattin Demirtas has also been imprisoned since November 2016 despite rulings by Turkey’s Constitutional Court and the European Court of Human Rights, which found that his rights had been violated. Figen Yuksekdag, the HDP’s former co-chair who has also been imprisoned since November 2016, stood trial in Ankara Tuesday on terror-related charges.

Nicholas Danforth, a fellow at the Wilson Center’s Kennan Institute who recently published an analysis with the Project on Middle East Democracy, said following initial openings, Turkish President Recep Tayyip Erdogan has taken a more hard-line approach to Kurdish politics, particularly since the collapse of peace talks in 2015.

“After repeatedly failing to defeat the HDP through democratic means, Erdogan has again fallen back on arresting its members,” Danforth told Al-Monitor. “In place of a long-term strategy, all they have left is continued repression.”

He added, “Erdogan has been eager to maintain a facade of democracy, but in the southeast that's already in ruins.”

The events take place amid Turkish military operations against PKK militants in northern Iraq. Ankara also continues to manage parts of northern Syria after a string of military incursions that officials said were launched to defend the nation against threats from PKK-linked militants operating in the areas.