Despite a ban on protests, the pro-Kurdish Peoples’ Democratic Party held a demonstration in Istanbul Thursday following removal of two deputies from Turkey’s parliament. 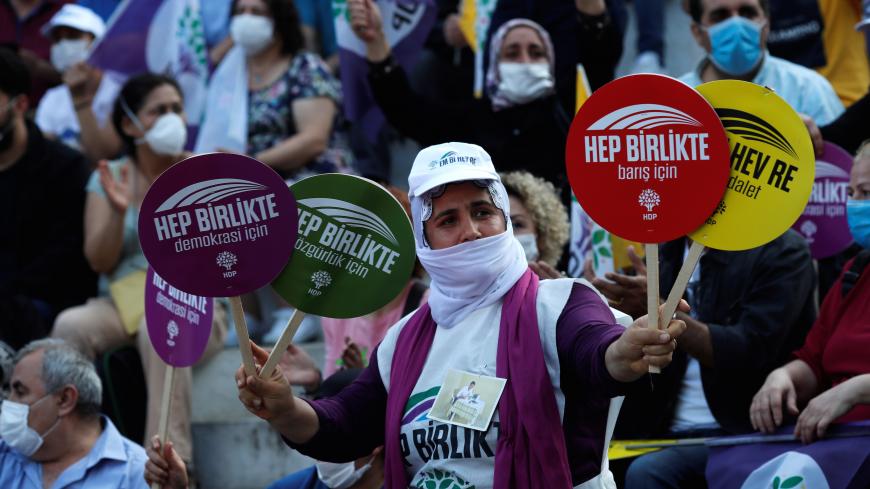 A supporter of the pro-Kurdish Peoples' Democratic Party holds placards during a gathering as part of their March for Democracy, in Istanbul, Turkey, June 18, 2020. The placards read: "All together for democracy, freedom, peace, justice." - REUTERS/Murad Sezer

ISTANBUL — Police in riot gear looked on as several hundred supporters of the pro-Kurdish Peoples’ Democratic Party (HDP) gathered in Istanbul’s Besiktas district Thursday for a demonstration against ongoing state pressure on the party.

Surrounded by armored vehicles and trucks mounted with water cannons, speakers condemned the removal of two HDP deputies from parliament earlier this month, flouting a ban on demonstrations issued by the Istanbul governor’s office Monday.

The rally was part of the HDP’s March for Democracy, which was launched Monday from two starting points on opposite ends of Turkey in the southeastern province of Hakkari and the northwestern province of Edirne, where the party’s former co-chair, Selahattin Demirtas, has been jailed since 2016 on terror-related charges. Both marches are “symbolic,” according to party members who are shuttling participants between urban centers until the two groups are scheduled to unite in Ankara Saturday for a final demonstration.

Arife Cinar, a member of the HDP’s Women’s Congress, marched in Edirne and Istanbul this week. She said police detained about a dozen marchers in Edirne, and some security force interventions resulted in the use of tear gas and rubber bullets, but the demonstration proceeded.

“There is no other way if our municipalities are restricted or taken over, if MPs are removed,” Cinar told Al-Monitor during Thursday’s demonstration in Besiktas’ Abbasaga Park. “It might be HDP marching today, but tomorrow other groups in our society will march.”

The march was organized after two HDP deputies, Leyla Guven and Musa Farisoglullari, had their parliamentary seats revoked earlier this month along with Enis Berberoglu, a deputy for the main opposition Republican People’s Party. All three MPs were detained the evening of June 4, though two have since been released, with Farisoglullari remaining behind bars. Guven represented Hakkari, which is why one of the marches began in the southeastern district.

The HDP had previously accused the government of carrying out a “coup” against elected officials. In May, five party mayors were sacked for terror-related charges and replaced with state-appointed trustees. Ankara officials have claimed some party members are linked to the Kurdistan Workers Party (PKK), a militant group that has waged a decadeslong insurgency against the state.

Since the March 2019 elections, 45 of 65 municipalities won by the HDP have seen their mayors replaced, while an additional six mayors did not receive mandates to govern as a result of previous dismissals under state of emergency decrees.

As Turkey’s second-largest opposition party, the HDP has been under pressure since it entered parliament in the June 2015 elections. Pressure then increased after a 2016 coup attempt sparked a broader crackdown on opposition groups. Hisyar Ozsoy, deputy co-chair of foreign affairs for the HDP, said state pressure has not abated despite the ongoing coronavirus crisis.

“They are continuing with their authoritarian policies even under these pandemic conditions, so as the HDP, we will continue with our democratic resistance,” Ozsoy told Al-Monitor.

Ozsoy also noted limited mainstream domestic media coverage of the party’s march and actions more generally. During a televised debate this week on Turkish broadcaster Haber Turk, a participant asked why most news channels talk about the HDP without inviting party members to speak on the networks, to which presenter Didem Arslan Yilmaz responded, “We are not a public institution; we are in the private sector. This is a preference.”

“The consolidation of the news media under AKP influence has hit all of the opposition hard, but it has hit the HDP the hardest,” Schenkkan told Al-Monitor. “Even in better times, they had difficulty getting mainstream coverage, and now it is impossible because of the tight control over stories and cable appearances,” he added.

Schenkkan said the HDP had been the subject of “unrelenting pressure” for more than five years, hindering members’ ability to govern and form broader coalitions.

“The pressure is encouraging internal splits, and it is making it harder and harder for the HDP to be in any kind of informal coalition with other parties,” he said, adding, “So they are weaker internally and can't count on any of the other parties in the opposition to stand up for them either.”

In a statement Wednesday, the Turkish Defense Ministry said the operations were “being carried out as part of our legitimate defense rights” due to “increased harassment and attacks on our police station and base areas.” On Thursday, four workers died in a roadside bomb explosion in Turkey’s southeast, which Ankara alleges was conducted by the PKK.

by Murielle KASPRZAK and Joseph SCHMID | AFP | May 26, 2022
END_OF_DOCUMENT_TOKEN_TO_BE_REPLACED