A Turkish court Monday sentenced Leyla Guven, a deputy with the Peoples’ Democratic Party (HDP) who was stripped of her parliamentary seat and legal immunity in June, to more than 22 years in prison on terrorism-related charges. 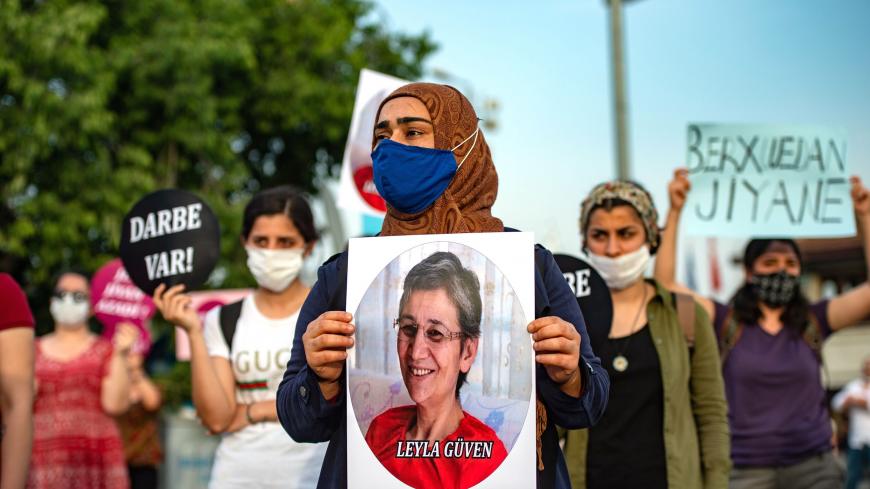 A demonstrator holds a picture of HDP lawmaker Leyla Guven during a protest against the detention of three opposition lawmakers, in Istanbul, Turkey, on June 6, 2020. - YASIN AKGUL/AFP via Getty Images

ISTANBUL – A former opposition party lawmaker who was stripped of her parliamentary seat and legal immunities in June was sentenced Monday to 22 years and three months in prison on terrorism-related charges.

Leyla Guven was convicted for membership of a terror group and disseminating terror propaganda, among other charges, by a Diyarbakir court that issued a warrant for her immediate arrest following a hearing Monday.

Guven, a former deputy of the pro-Kurdish Peoples’ Democratic Party (HDP), is among dozens of HDP deputies and members who have faced legal proceedings for alleged links to the Kurdistan Workers Party (PKK), a militant group that has fought the Turkish state since 1984. The PKK is designated as a terrorist organization in Turkey, the United States and the European Union.

State prosecutors have increasingly put pressure on the HDP in recent years, jailing its former co-chairs Selahattin Demirtas and Figen Yuksekdag in 2016, and replacing many of the party’s municipal mayors with state-appointed trustees following local elections in 2019.

The latest news comes after a recent call for the HDP to be outlawed by Devlet Bahceli, chair of the Nationalist Movement Party (MHP) and ally of President Recep Tayyip Erdogan’s Justice and Development Party (AKP).

“Any party organization that takes as its reference ethnic separatism and terrorism should not be allowed,” Bahceli tweeted Thursday in reference to the HDP, adding, “If necessary, let us change the constitution, if necessary, reform the Political Parties Law and the Turkish Penal Code, let’s stop this bleeding wound.”

To hold a parliamentary and electoral majority, Erdogan is reliant on the support of Bahceli and MHP deputies, who have used their position to advance the party’s agenda and lobby for more hard-line measures against members of Kurdish political movements.

Gonul Tol, director of the Center for Turkish Studies at the Middle East Institute, said the dynamics of the current AKP-MHP alliance have “tightened the screws on Erdogan’s Kurdish policy” and increased pressure on the HDP.

“Bahceli has been calling for the closure of the HDP, and at this point … [for Erdogan] closing down a party would be too big of a step for him,” Tol told Al-Monitor.

She continued, “But what he’s been doing to HDP amounts to the near closure of the party because he has gone after its [parliament members], its mayors.”

Bahceli’s latest statements may have been spurred by the HDP’s refusal last week to join other major opposition parties in condemning US sanctions imposed against Turkey over the 2019 acquisition of Russian-made S-400 missile defense systems.

Yet Hisyar Ozsoy, co-spokesperson of foreign affairs and Diyarbakir deputy for the HDP, said Bahceli’s comments along with Guven’s conviction were part of a broader campaign to undermine the democratic rights of Kurdish voters and elected Kurdish officials in Turkey.

“They unseated Leyla Guven, now they sentenced her, and there are also a lot of debates regarding a possible closure of the HDP,” Ozsoy told Al-Monitor. “When you bring all of these things together, it’s a strong political and symbolic message to the Kurdish people that this state and this government are not willing to negotiate on peaceful terms.”

Ozsoy said Guven has been a prominent figure in Kurdish political parties since 1994 and has worked to advance gender and democratic rights over the years.

Guven, who is the current co-chair of the Democratic Society Congress, was previously arrested in January 2018 for criticizing Turkish military operations against Kurdish militants in Syria. In November of that year, she went on an 11-week hunger strike to protest the prison conditions of jailed PKK leader Abdullah Ocalan and was eventually released in January 2019 after her health condition seriously deteriorated.

In June 2020, Guven was stripped of her parliamentary seat, along with two other opposition lawmakers in June, and briefly arrested before being released pending trial.

“We are expecting the government to be more and more aggressive toward the opposition in the months to come,” Ozsoy told Al-Monitor.