The mayors of Turkey's Diyarbakir, Mardin and Van have been replaced by state appointees in the latest move against a major pro-Kurdish party. 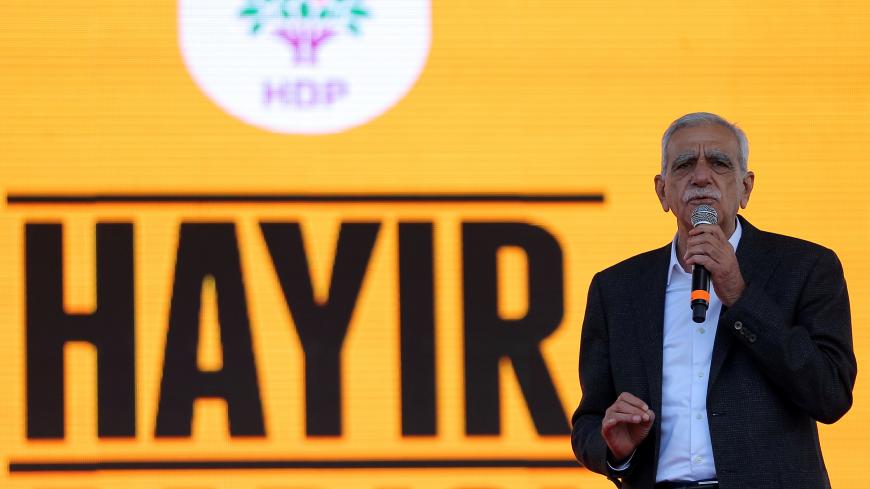 Kurdish politician Ahmet Turk addresses "Hayir" ("No") supporters during a rally against a referendum in Istanbul, Turkey, April 8, 2017. - REUTERS/Huseyin Aldemir

According to the statement, the municipalities had “sought to become logistical centers for ensuring militant [resources], financial support and equipment for supporting terrorist activities.”

The move comes less than five months after the mayors were elected in the March 31 municipal elections and is the latest strike against the HDP, which some Turkish leaders with nationalist leanings and pro-state media outlets claim is a political front for the Kurdistan Workers Party (PKK), a militant insurgency that has waged war against the Turkish state since the 1980s.

The dismissed officials — Diyarbakir Mayor Selcuk Mizrakli, Mardin Mayor Ahmet Turk and Van Mayor Bedia Ozgokce Ertan — were confirmed as candidates by Turkey’s Supreme Electoral Council ahead of the March elections. They won their seats with 63%, 56% and 53% of the vote, respectively, but were dismissed Monday morning. The ongoing investigations include charges of making propaganda for a terrorist organization and being a member of an armed terrorist organization.

The Interior Ministry also accused the mayors of offering employment opportunities to family members of deceased PKK militants and showing sympathy for the group by attending the funerals of its members, changing street names to honor the group and observing moments of silence for deceased militants.

Ankara's appointees have taken over the three districts, taking on the municipal duties of the dismissed mayors. They may keep the positions until the next scheduled municipal elections in 2024.

A number of opposition leaders and HDP officials denounced the move as undemocratic. Newly elected Istanbul Mayor Ekrem Imamoglu of the Republican People’s Party (CHP) tweeted that appointing trustees to replace elected officials violates “democratic norms" and that "Ignoring the people’s will is unacceptable.”

Salim Kaplan, who oversees local administrations for the HDP, said the dismissals are a continuation of a governing system that saw nearly 100 municipalities in Turkey run by state-appointed trustees between 2016 and 2019 after many Kurdish officials were ousted during mass purges sparked by a 2016 coup attempt.

“It’s the confiscation of the Kurdish peoples’ will,” Kaplan told Al-Monitor. “The March 31 municipal elections were a major defeat for the [ruling Justice and Development Party] AKP. … We define this as a political coup, not only against the will of Kurds and their municipalities but also against Turkey’s democracy.”

Citing the continued pressure on the HDP, Kaplan said Monday’s dismissals could be an attempt to stop the party’s ongoing investigations into the spending practices of previous state-appointed trustees. HDP officials elected in March found multiple municipalities had been left with large budget deficits and have claimed large sums of public funds were used unjustifiably on lavish renovations to municipal buildings.

In campaign speeches preceding the March elections, Turkish President Recep Tayyip Erdogan warned the state would crack down on elected officials found to have ties with PKK militants.

"If you happen to send the opportunities provided by the state to Qandil,” Erdogan said during an election rally, referring to the northern Iraqi base used by PKK leaders, “we will once again, immediately and without waiting, appoint our trustees."

Since the March elections, 88 municipal HDP officials have been dismissed or suspended, Kaplan said. On Aug. 10, two HDP officials were removed from duty in Turkey’s Caldiran and Edremit districts on similar grounds. The latest dismissals coincided with broader security operations against suspected Kurdish militants Monday morning in which at least 418 people were detained across 29 provinces in Turkey.

In Diyarbakir, Turkey’s largest Kurdish-majority city, police dispersed protesters that gathered near the municipal building on Monday. The tensions come as nine HDP deputies remain behind bars, including former co-chairs Selahatin Demirtas and Figen Yuksekdag along with dozens of mayors.

Hisyar Ozsoy, deputy co-chair of foreign affairs for the HDP, said the chain of events were the result of an increasingly nationalist state policy put forth by a coalition between the AKP and Turkey’s Nationalist Movement Party (MHP).

“Over the last three years, this government has been trying to destroy the Kurdish democratic opposition as well as the Peoples’ Democratic Party,” Ozsoy told Al-Monitor.

He added, “It seems this is the start of a new wave of political repression, and it’s not going to be limited to HDP municipalities — there will probably be other dismissals in the near future if there isn’t a strong reaction against this totally unlawful practice from both the people in Turkey as well as the international community.”

The Interior Ministry also cited the HDP’s co-chair system, in which elected male and female officials share positions, as incompatible with Turkish governance norms. HDP officials responded by saying the practice was legal, claiming co-chairs are largely symbolic and that on paper one official fills the mayoral seat, while the other takes a position in the municipal assembly.

Under Turkish law, when elected officials are deemed unfit to serve and removed from duty, the municipal council normally elects the new mayor from within its ranks. Such procedures took place in 2016 in AKP and MHP-led municipalities, but Ozsoy said different rules apply for HDP-led districts.

“They are not even doing this,” Ozsoy told Al-Monitor. “It’s totally unlawful, but it seems to continue. … These actions render elections totally meaningless and useless in this country.”