Two elected officials were suspended over the weekend as pressure continues on the pro-Kurdish Peoples’ Democratic Party in Turkey. 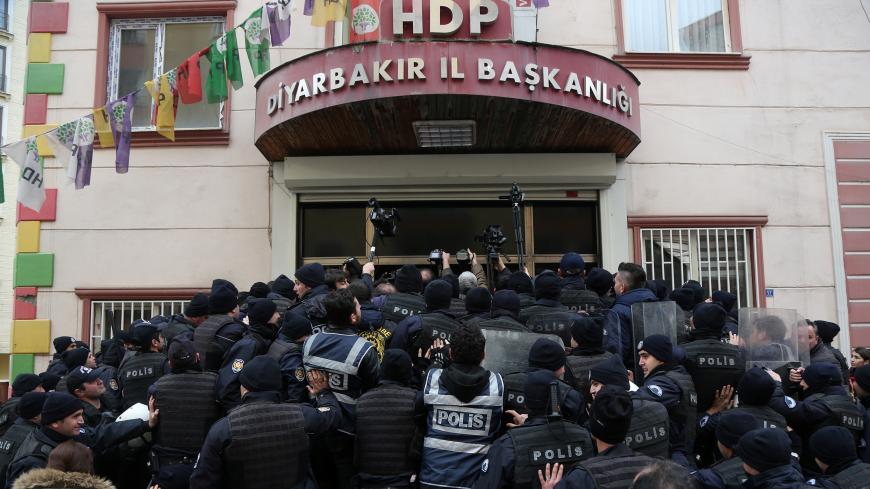 Riot police block the entrance of a pro-Kurdish Peoples' Democratic Party office to prevent party members from leaving for a demonstration in the southeastern city of Diyarbakir, Turkey, Jan. 21, 2018. - REUTERS/Sertac Kayar

An elected official hasn’t run Caldiran, a town of 67,000 people near Turkey’s border with Iran, since February 2017.

That’s when the former co-mayor, Faruk Demir, was dismissed by presidential decree and placed in pre-trial detention for 11 months on terror charges. A state-appointed trustee took over municipal functions in Caldiran as in nearly 100 other municipalities — most of which were run by officials affiliated with the pro-Kurdish Peoples’ Democratic Party (HDP)  — that were impacted during mass purges stemming from a 2016 coup attempt.

Demir was eventually released, though his trials continue. In the meantime, he prepared for the March 2019 municipal elections. This spring he ran for the town’s municipal assembly with the HDP co-mayor candidate Leyla Atsak. They won handily, but Atsak was denied the mayoral seat on the grounds she had been previously dismissed by presidential decree, despite being confirmed as a candidate by Turkey’s Supreme Electoral Council before the vote.

As in six other municipalities following the March elections, the mayorship was given to the runner-up candidate, which in Caldiran was Sefik Ensari of the ruling Justice and Development Party (AKP). Demir maintained his position in the HDP-majority municipal assembly until Aug. 10, when he received a call informing him of his suspension.

“It was no surprise to me,” Demir told Al-Monitor. “I was expecting that they would do something unlawful and take this position from me.”

Demir was one of two elected HDP officials suspended from municipal duties over the weekend. Turkey’s Interior Ministry cited Demir’s ongoing trials as the basis for his suspension but did not respond to requests for interviews at the time of publication.

The move highlights ongoing pressure on Turkey’s minority rights-focused HDP, whose officials have for years been restricted or barred from participating in parliamentary and municipal politics. Nine of the party’s deputies, including former co-chairs Selahattin Demirtas and Figen Yuksekdag, remain in prison despite condemnation from international governments and human rights advocates.

Turkish leaders with nationalist leanings have long claimed the HDP is a political front for the Kurdistan Workers Party (PKK), an armed group that has waged war against the Turkish state since the 1980s. Following the collapse of state-sponsored peace talks in 2015 and with the ongoing threat of a Turkish military operation against a Kurdish militant enclave in northeast Syria, HDP officials continue to face allegations of terror links, limiting one of the primary legal avenues for Kurdish representation in the Turkish political sphere.

Prior to the March 31 elections, President Recep Tayyip Erdogan said candidates sympathetic to the PKK would be ousted from their positions.

"If you happen to send the opportunities provided by the state to Qandil,” Erdogan said during an election rally, referring to the northern Iraqi base used by PKK leaders, “We will once again, immediately and without waiting, appoint our trustees."

Six HDP mayors and 56 municipal assembly members elected in March were barred from assuming their positions for having been previously dismissed by decree or for ongoing investigations, according to Salim Kaplan, who oversees local administrations for the HDP. Runner-up candidates took their place in what Kaplan describes as a “continuation of the trustee system.”

“In the constitution, it says everyone is innocent until proven guilty so they cannot limit a person’s right to be elected just because they are on trial,” Kaplan told Al-Monitor. “The state has a new attack system where they go after each municipality, one by one, taking down each individual in our party.”

One of them is Yilmaz Berki, an HDP mayoral candidate for the Tusba district of Van. On March 31, he was elected with 60% of the vote, but was denied the mayorship due to a prior dismissal through a July 2017 decree. Yilmaz said the electoral council had approved his application for candidacy without issue and that there were no grounds for denying him the position.

“I have no ongoing trials, no ongoing investigations, no criminal record. I have nothing against me,” Berki told Al-Monitor. “My slate is clean.” Berki said he has opened legal proceedings against the ruling, but the administrative courts looking into the case are located in Ankara, where he and about 300 other dismissed colleagues in Van cannot easily visit.

“If we were able to seek our rights in local courts that are more accessible, maybe we would have proven our innocence,” Berki said, adding, “The state of emergency might have ended, but nothing has changed for us.”

Unlike members of parliament, who have immunity against legal proceedings while in office — unless the parliament votes to lift the immunity of individual members — municipal officials and civil servants have fewer constitutional protections.

According to Abdullah Zeytun, head of the Human Rights Association's Diyarbakir office, the current string of suspensions are being enacted through Article 127 of the Turkish Constitutions, which affords the Ministry of Interior the authority to remove elected mayors, councilors, municipal assembly members and others deemed unfit for office.

“It was foreseeable that [the state] would take advantage of an unlawful article in the constitution,” Zeytun told Al-Monitor. “They are applying it in a completely arbitrary manner by basing the most recent suspensions on ongoing investigations for alleged links to the PKK.”

Kaplan said few opposition party members have spoken against the legal proceedings. When Istanbul mayoral candidate Ekrem Imamoglu of the Republican People’s Party (CHP) was challenged to a do-over election in June, Kaplan said his party members and voters supported the CHP and helped the candidate reclaim his mayoral mandate. But he complained such efforts are rarely reciprocated.

“This shows mainstream Turkish political parties lack the basic ideals of a democratic culture,” Kaplan told Al-Monitor. “They are only dissident when democracy does not work for them. Only when their right to democracy is [threatened] do they become very vocal.”

Reflecting further on the suspensions, Kaplan said the installation of unelected officials in municipalities won by HDP candidates has come with financial costs. Across the Kurdish-majority southeast, he said state-appointed trustees had accrued heavy debts for municipal budgets.

In Yuksekova, a city of 72,000 citizens, the state-appointed trustee left the municipality 681 million liras (about $122.4 million) in debt upon leaving office in March, Kaplan said. Similar trends were documented in Diyarbakir as well as Mardin, where a trustee handed over the municipality with 1.26 billion liras ($22.6 million) in debt after taking office in 2016 with a slight surplus.

The same thing occurred in Caldiran, though on a smaller scale. Before his dismissal in 2017, Demir said the city budget was running on a surplus of 250,000 liras ($45,000). When he returned to office earlier this year, the municipality had incurred a debt of 80,000 liras ($14,000). He claimed the trustee had used public funds to renovate the mayor’s office and his colleagues found tiles meant for sidewalks being used in courtyards and on private property belonging to AKP officials. During his last week in office, Demir introduced a motion to investigate the trustee’s use of public funds, which he suspected was the real reason for his dismissal.

“We asked an AKP official to disclose where this money was spent, and they said they couldn’t share the information without permission from the higher authorities,” Demir said. “I’m not in the assembly anymore, but I’m going to continue looking into where this debt came from.”