President Recep Tayyip Erdogan claimed PKK militants had infiltrated political parties in order to rig next month's elections, and vowed to dismiss any mayors determined by Ankara to support the outlawed group. 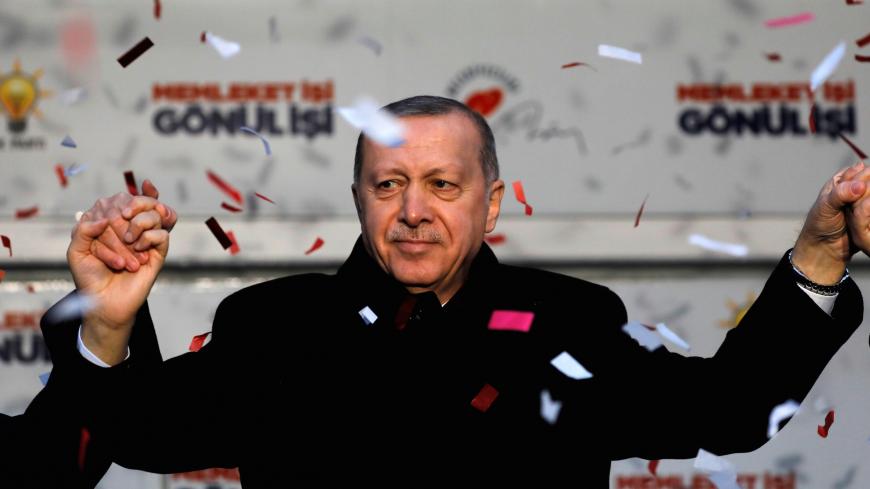 ANKARA, Turkey — President Recep Tayyip Erdogan has threatened to reverse the results of next month’s municipal elections, saying that if voters elect mayors linked to the Kurdistan Workers Party (PKK), the Kurdish insurgent group, he will promptly dismiss them and appoint civil servants to run their towns.

In a campaign speech in the central Anatolian town of Yozgat, Erdogan also said that PKK militants had infiltrated the alliance of the Republican People’s Party (CHP) and the Iyi, or Good Party, in order to work as election observers and rig the results in the opposition’s favor.

“We will lay a criminal complaint against Recep Tayyip Erdogan,” CHP deputy chairman Ozgur Ozel said in a tweet Tuesday. The president had “tarnished our party’s reputation by linking it to terrorist organizations.”

The HDP, a pro-Kurdish party that polled third in last year’s general elections, said Erdogan’s government has “nothing to offer this country anymore.”

“They only want to strengthen their hand by criminalizing the HDP,” the party said in a statement from its press office.

“The HDP took the votes of 6 million people in the last election. We don’t accept the claim that a party which gained votes from all parts of society is taking orders from Qandil,” the party added, referring to the Iraqi mountain range where the PKK is headquartered.

Curiously neither the CHP nor the HDP referred directly to Erdogan’s vowing to remove mayors whom he deems to be tied to the PKK.

The threat applies to the HDP, which has seen the government dismiss many of its elected mayors in the Kurdish-majority towns of southeast Turkey. For instance, in Diyarbakir, the virtual Kurdish capital of Turkey, Gultan Kisanak and Firat Anli were elected co-mayors for the HDP’s sister party, the Peace and Democracy Party (BDP), in the 2014 elections. But the government removed them in 2016 and the city is now run by Ankara appointees.

One of the criticisms of the government’s policy of ousting elected officials is that the mayors’ alleged PKK links cannot be challenged in court.

The HDP has been urging people to vote for them on March 31 so they can regain control of the town councils taken over by Ankara.

Erdogan said: “Now they say they will take back the towns where the trustees are appointed. If my citizens give you the opportunity to get them back, and if you send the facilities given by the state to Qandil, we will immediately appoint our trustees again.”

The HDP is well aware of the risk of Erdogan’s expelling the mayors elected on March 31, the party’s co-leader, Pervin Buldan, told foreign correspondents in Istanbul on Feb. 14.

“To overcome this, we need even bigger [electoral] victories,” Buldan said. “We believe that strong results on March 31 will show the world that we are not accepting the government’s threats.”

A retired professor of politics at Ankara University, Dogu Ergil, said Erdogan’s threat to expel mayors will not influence the polls.

“Erdogan has already lost the Kurds, so it won’t affect the Kurdish vote,” he told Al-Monitor.

Ergil predicts the AKP will poll less than a third of the Kurds on March 31.

“In the past three years, Erdogan has been against anything that is Kurdish,” he said.

Asked to give examples, Ergil referred to Erdogan’s objection to HDP politicians using the word “Kurdistan,” despite the fact that Erdogan once used this word in parliament. He referred to Erdogan’s revoking the immunity of HDP legislators and putting them in prison on charges of terrorism — as happened with the previous leaders of the HDP, Selahattin Demirtas and Figen Yuksekdag.

And Ergil pointed to Erdogan’s strenuous opposition to the administration set up by Syrian Kurds in northern Syria and the Iraqi Kurds’ referendum on independence in 2017. “He hates any positive development in other parts of the Kurdish world,” Ergil said.

Erdogan and his spokesmen frequently declare that they are not against the Kurds as a people, but they are against “PKK terrorism” and “PKK sympathizers in the HDP.” Ergil said Kurds do not read his actions that way.

“These moves are received as anti-Kurdish, not as anti-HDP,” he said.

In a separate development today, Turkish truck drivers parked their transport trucks next to Turkey’s border gates with Greece and Bulgaria to protest the imminent execution in Saudi Arabia of a colleague convicted of possession of drugs.

The drivers did not block the roads at Kapi Kale and Hamza Beyli, on the Bulgarian border, or at Ipsala, on the Greek border, but they succeeded in drawing attention to the plight of Remzi Cicek, who is due to be executed Wednesday.

“One of our brothers detained in Saudi Arabia for four years has been sentenced to death,” driver Burhan Oguz said on CNNTurk.

Wearing a wool hat and anorak, Oguz added: “We believe that he is innocent. We want our brother to be taken down from the gallows.”

On a happier note, CNNTurk broadcast footage of voters giving Erdogan homemade cakes to celebrate his 65th birthday today. He was campaigning in northern Turkey and the well-wishers approached him as he stepped out of his car. Clearly touched by the gesture, we saw the president eating a piece of cake and responding graciously to people who wanted to congratulate him.

But then CNNTurk went one step further. Repeatedly during the day, independent of the birthday-cake footage, the channel screened a still picture of Erdogan with a caption saying it was his 65th birthday and giving the hashtag #NiceSenelereSeninle (To many years to come with you).

The image spoke volumes about CNNTurk, a privately owned channel that used to have a reputation for political independence.