Turkey's president is reviving a bitter debate by threatening to nullify local election results in municipalities that elect mayors from pro-Kurdish parties. 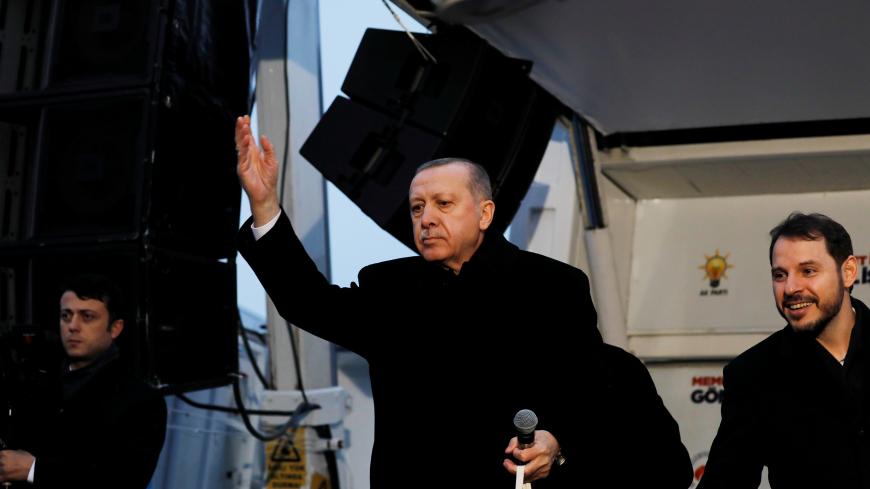 At a Feb. 26 election rally in the town of Yozgat, Erdogan said that if mayoral candidates from pro-Kurdish parties win, he will replace them with appointed trustees. This attempt at intimidation seems to have already backfired on him in predominantly Kurdish regions.

Erdogan has specifically targeted parties he says are affiliated with the outlawed Kurdistan Workers Party (PKK), which Turkey, the United States and other countries consider a terrorist group. Painting with a broad brush, he implied links between the PKK and the pro-Kurdish Peoples’ Democratic Party (HDP) and the Kurdish-friendly Republican People’s Party (CHP).

After Erdogan's speech in Yozgat, the HDP and CHP fired back with their own threat to lodge a criminal complaint against the president for having "tarnished" their reputations.

Erdogan's threat to remove mayors from office has rekindled the “trusteeship” debate that erupted in 2016, when the Turkish government first appointed trustees to municipalities to replace democratically elected pro-Kurdish mayors in several towns and cities.

Some 94 trustees were posted to 102 municipalities. As a result, some 40 million people in Turkey are ruled by appointees instead of their elected leaders. In municipalities where no trustees were appointed, mayors were relieved of their duties, which were then transferred to district and provincial governors.

Erdogan's ruling Justice and Development Party (AKP) alleges that those local administrations had allowed the PKK to take advantage of the municipalities' resources. Kurdish politicians deny these charges.

Will trustees once again become an election tool? It's hard to say, but it's already possible to see the adverse effects of Erdogan’s threats in the reactions of residents and civil society organizations.

“If he really means it, then why hold elections? It will be a countermove against parliamentary democracy. He is basically telling people, ‘If you elect them, I will fire them and replace them with my people,’” Cihan Aydin, chairman of the Diyarbakir Bar Association, told Al-Monitor.

Aydin is sure Erdogan’s remarks will backfire. “I think voters in major cities like Ankara, Izmir and Istanbul will stand against it. It's not a correct step as an election strategy,” he added.

“It's a threat that … puts democracy on the back shelf. … It's not acceptable for an elected official to erect such barriers in front of people who may be elected tomorrow,” he told Al-Monitor.

“The person who said these words was elected by the people. He came from the ballot box. I don’t think he will now make gains. Actually, it may backfire [regarding] voters’ choices. Voters now think, ‘If the ones I elect won't be accepted, then why bother?'" he added.

Many locals also expressed discomfort. Sehmuz Cakar, a Diyarbakir resident, didn’t want to reveal who he would vote for, but asked, “Why waste so much money to organize elections?”

He told Al-Monitor that Erdogan might as well skip the voting and just appoint the people he wants.

There are fears that a trusteeship move by the government would cause tension in the region. A shopkeeper who spoke to Al-Monitor of the matter recalled that there were violent clashes between Kurdish militants and Turkish security forces when the trustees first arrived. But the public was tired of these clashes and willing to accept the trustees to end the violence.

"But it is different now," he said. "People will react."

On the other hand, there are also people who favor trusteeship. According to them, support for trustees doesn't mean support of the AKP government. They appreciate the services trustees provide.

Nahit Kuscu is one of these advocates. “People are satisfied with the unprecedented services [trustees] provided. But as the regional population considers the elections an ideological event, they will vote for the HDP and live with whatever happens after the elections. They will vote although they know there will be trustees taking over,” he told Al-Monitor.

Some of the services provided have included road repairs, new junctions, green areas and new public transport fleets. Yet the trustees were only able to provide such services because the ruling AKP provided an array of resources and facilities that hadn't been offered to the mayors.

Also, people's appreciation of these services is being marred by Erdogan's threats and government officials' hawkish stance against the HDP. Thus, such "favors" probably won't translate into votes for the AKP in the upcoming elections, scheduled for March 31.