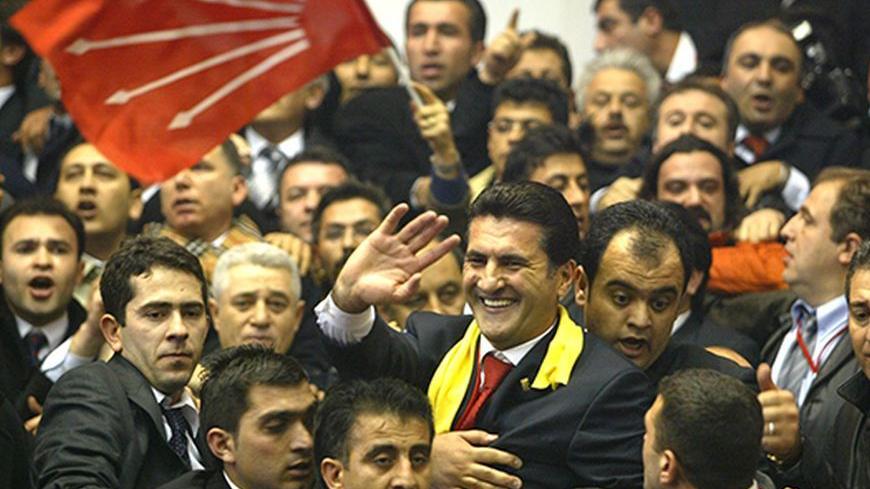 Mustafa Sarigul waves to supporters at the beginning of the Republican Peoples Party's 13th extraordinary congress in Ankara, Jan. 29, 2005. Although later expelled from the CHP, he may now run on its banner in the Istanbul mayor's race next year. - REUTERS/Umit Bektas

Turkey can be roughly divided in two: Istanbul and the rest of the country. Istanbul is the role model for all Turkey. Turkey emulates Istanbul. It doesn’t matter whether it is political, cultural, social, economic, sports, whatever. There are two prerequisites for any trend to be adopted by Turkey: To originate from Istanbul or to be approved by Istanbul. Any trend that is not adopted by Istanbul is bound to remain ineffectually local.

Istanbul is the key junction of the country. Istanbul decides who passes through that junction and who can’t. Therefore it is not possible to win Turkey without winning in Istanbul. Or, those who lose Istanbul in the end will lose the country. This rule has never been negated.

After the Sept. 12, 1980, coup, the Motherland Party set up by then-Deputy Prime Minister Turgut Ozal won the first elections it participated in, in 1983. Its eventual loss of power began with its losing the Istanbul local elections in 1989; in the 1991 general elections, Motherland was defeated.

Also, the beginning of the march toward power by the mainstream Islamic current was the 1994 local elections. Today’s Prime Minister Recep Tayyip Erdogan, who was then the Istanbul provincial leader of the Welfare Party, was catapulted to the forefront of Turkish politics by winning the mayoralty elections for metropolitan Istanbul.

Since that day it has always been the candidates of Islamic parties who won the local elections of Istanbul. Their uninterrupted hold on local rule in Istanbul accrued massive political and administrative experience to Turkey’s Islamist movement. It is said that Erdogan’s team, while he was the mayor of Istanbul, today occupies a significant part his party’s core.

This megacity also provided massive financial resources to the Islamist movement for its politics. To illustrate the potential of the Istanbul economy to indirectly finance politics, one only needs to remember that that 39% of the entire tax revenues of Turkey, the 17th biggest economy of the globe, are generated from Istanbul.

It is this Istanbul that will go to the ballot box at the end of March 2014, once again for local elections to decide whether the current Islamist local rule is to continue after 20 years in power.

Voters are in such a predicament for the first time during the AKP's reign. Looking at likely candidates and interesting poll results, we can forecast that the AKP’s local rule in Istanbul might be heading into a touch-and-go situation.

There is indeed a factor that can be a serious threat to AKP in Istanbul: Mustafa Sarigul, the current mayor of multi-cultured cultured, richest and most populated district of Sisli in the center of Istanbul. Unless there is major surprise, he is expected to join the main opposition Republican Peoples Party (CHP) in the coming days and announce his candidacy for Istanbul’s mayoralty.

Polls say that if Sarigul becomes a candidate then the contest would be between Sarigul and the current Mayor Kadir Topbas, the most likely AKP candidate. One of Turkey’s leading pollsters, Konsensus, in its latest survey revealed on Oct. 16 on CNNTurk found that 46.8% of voters in Istanbul said they would vote for CHP if Sarigul were its candidate. His possible rival Topbas had 44.9% support in that poll. The poll was taken from 1,000 respondents on Oct. 7-9 and had a margin of error of plus or minus 3%. Thus one can say that Sarigul and Topbas are running neck and neck.

Sarigul, 57, was elected to  parliament for the Social Democrat Populist Party (SHP) of the late Erdal Inonu in 1987. Sarigul was only 30 at the time, thus becoming the youngest-ever member of parliament. In 1999, he was first elected as the mayor of Sisli, a center of trade and finance where people of widely divergent  social classes, ethnic groups and religiosity live. Sarigul, who was then the candidate of the Democratic Left Party of the late Bulent Ecevit, received 39% of the votes. In 2004, when he ran as a candidate of the CHP, he scored an overwhelming victory of 65.7%. The candidate of the ruling AKP mustered only a meager 22% vote.

In 2009, Sarigul was elected mayor of Sisli with 54.7% of the vote, while his AKP rival fared even worse with 18%. Nearly all the polls taken so far indicate that should Sarigul not run under the CHP banner, that party would only get about 30% of the vote.

It is therefore necessary to speak of a basic "Sarigul difference." Sarigul is a politician who gets votes also from outside the CHP constituency. If he had not been supported by the secular middle class and Alevis of Sisli, but also by the Kurds, conservatives, nationalists, Jewish and Christian minorities, the CHP couldn’t have defeated the AKP so soundly. It was impossible to achieve such a success only with the quality of municipal services provided.

It is therefore possible to assert that Sarigul had succeeded in overcoming Turkey’s divisive fault lines with his political narratives and attitudes, and managed to bring together such conflicting social and cultural diversities in his own person. In his narratives you would find such themes as "embracing 100% of citizens, not to discriminate between us and them, and to strive for the well-being of people without sectarian considerations."

Such narratives based on opposing polarization and discrimination could be dismissed as futile in countries where they are internalized in all institutions and in principles of democracy. But Turkey is not a country where democracy has deep roots. Turkish Prime Minister Recep Tayyip Erdogan, the leader of the ruling AKP, has opted to consolidate his power by systematically polarizing the people; any opposition to polarization and any attempts to unify people are therefore meaningful and will accrue political gains. Erdogan’s remarks against the Gezi protesters insinuating that he could let his supporters loose in the streets by saying, "We are hardly holding back 50% of the country," are fresh in our minds.

Sarigul’s positioning himself with a positive outlook against Erdogan’s polarizing narrative is not a coincidental. The conflicting political narratives and attitudes of Sarigul and Erdogan actually reveal a common characteristic of the two men: Their capacity to reach larges masse and  to influence them. This naturally makes them rivals.

Sarigul says, "There are two political actors in Turkey who have risen from nothing." One is himself and the other is Erdogan.

Their social roots are not all that different. They are both of Anatolian origin; both are children of low-income families. Both did not have easy lives as children and young boys.

It is meaningful that Sarigul in his just-published book, Not One Missing, Not One Extra, telling his life story and recounting his political endeavors, recalled the days when he was working at the transport department of Istanbul Municipality in the late 1970s, and noted that Erdogan was working there, too.

It is time to wait for the outcome of the CHP Party Council meeting on Sarigul’s return to the CHP; he was expelled from it in 2005 because he was competing against then-party Chairman Deniz Baykal.

We have to observe the forthcoming local elections above all from the perspective of Istanbul. The results of local elections in Istanbul will also affect the outcome of the presidential election scheduled for August of the same year, and Turkey will head into the 2015 general elections in a political climate conditioned by these two elections.

Of course, in an unpredictable country like Turkey, wide open to surprises, five months is, politically, a very long time.