The Republican People’s Party (CHP) does not represent a credible opposition to the ruling AKP. 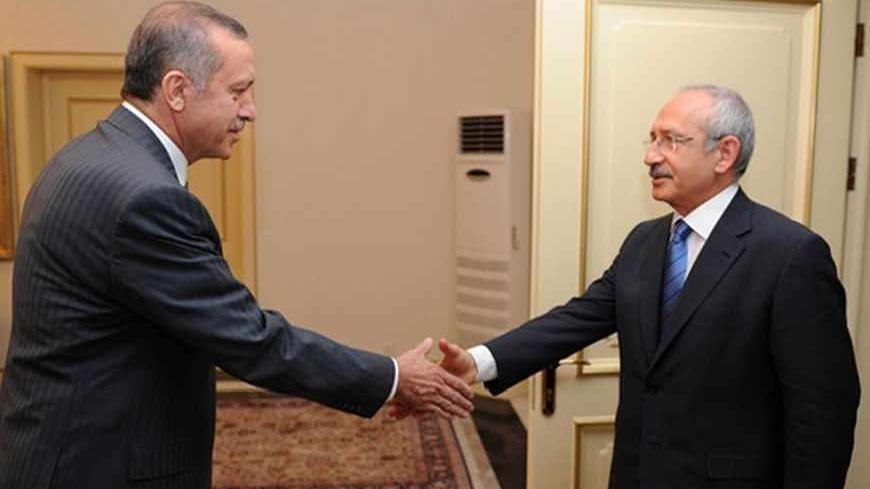 Turkey’s main opposition Republican People’s Party (CHP) leader Kemal Kilicdaroglu flew to Baghdad on Aug. 20 for an official visit that was meant to calm growing tensions spurred by what Iraq’s Shiite Prime Minister Nouri al-Maliki charges are his Turkish counterpart Recep Tayyip Erdogan’s overtly interventionist and pro-Sunni policies. But if his true aim — as some critics claim — was to embarrass Erdogan’s ruling Justice and Development Party (AKP), it was Kilicdaroglu who came away with egg on his face.

Flanked by an army of businessmen and journalists, Kilicdaroglu had set himself an ambitious itinerary. After Baghdad, he was due to travel to Kirkuk, Karbala and Najaf, where the Grand Ayatollah Ali al-Husseini al-Sistani had agreed after much cajoling to grant the CHP leader an audience. Instead, after meetings with Maliki, parliament speaker Osama al-Nujaifi and assorted Turkmen leaders, Kilicdaroglu abruptly announced that he was heading home.

The precise details of why the visit was cut short remain unclear. CHP sources claim it all began when Kirkuk’s Kurdish governor, bowing to pressure from the AKP, refused to meet with Kilicdaroglu. Others cite security concerns. Kilicdaroglu’s advisers are said to have persuaded him to cancel the meeting with Sistani as well, so as not to reduce the trip to “an all-Shiite affair.” Either way, the CHP came away having achieved little else “than getting sunburned in the hellish Iraqi heat,” noted a disgruntled CHP lawmaker, who declined to be identified by name, in an interview with Al-Monitor.

Kilicdaroglu’s top foreign policy adviser, Faruk Lologlu, put on a brave face as he assured reporters upon his return that the CHP had been received on a scale no prior visiting dignitary had seen. Moreover, the CHP had opened a channel of communication between the central government in Baghdad and hundreds of Turkish businessmen hurt by the chill in relations.

Unimpressed by such assertions, Turkey’s Foreign Minister Ahmet Davutoglu made no secret of his scorn. “They [the Iraqis] lured them [the CHP] with promises that they would take them to Kirkuk, and didn’t so much as offer them dinner,” Davutoglu told journalists en route to Europe on Aug. 23. He was echoing his government’s view that the sole purpose of the Maliki-Kilicardoglu encounter was to swap their grievances against Erdogan.

Such claims are exaggerated. Yet, snubbing Sistani was a "missed opportunity, and big gaffe, which shows how poorly CHP understands the Middle East,” said Ceyda Karan, a columnist for the Turkish daily Taraf, who traveled with Kilicdaroglu, in an interview with Al-Monitor. Indeed, many Turks would argue that the CHP does not understand Turkey either, which is why modern Turkey’s first political party that was founded by Ataturk in 1923 continues to fare so dismally in the polls.

The lack of an effective opposition is cited as one of the main reasons why hundreds of thousands of Turks took to the streets to protest the government in June. With no credible party to air their grievances against a seemingly unassailable government, people decided to take matters into their own hands. It is also why Erdogan has had free rein to indulge the very autocratic impulses the protesters were rising up against.

Propped up by the country’s once omnipotent generals, the CHP had for decades slavishly served the pro-secular elites at the expense of the country’s overtly pious masses they so openly despised. Shrilly xenophobic and out of touch, the party shared power in a string of scandal-spattered coalition governments and steadily slipped in the polls. In 1999, it failed to win any seats in the general elections and has remained out of government ever since. Paradoxically the Islam-rooted AKP had at least during its first term in power done more than any of its notionally pro-Western and militantly pro-secular predecessors, nudging Turkey closer to a Western-style democracy and getting the European Union — albeit kicking and screaming — to open full membership talks in 2005.

Kilicdaroglu's rise in 2010 to the party’s leadership — the incumbent, Deniz Baykal, was forced to resign over a sex scandal — inspired hope of a rebirth. It was the first time that a member of the long-repressed Alevi minority was leading any major political party, let alone the CHP. It was something of a revolution: Kilicdaroglu hails from a much-venerated tribe of Alevi spiritual leaders, some 80 members of whom perished in the army’s brutal scorched-earth campaign against his native province of Tunceli or Dersim that took place in 1938 on the watch of Ataturk and the CHP.

Mild-mannered and untainted by corruption, the former bureaucrat leaves one feeling that he is genuinely committed to democracy. In the 2011 general elections, Kilicdaroglu fielded outspoken Kurds and Alevis in a bid to revamp the party’s patrician image. The CHP came away with 26% of the vote, not the big leap that it had hoped for, but still a marked improvement on the 19% recorded in the 2007 polls. But Kilicdaroglu’s efforts to steer the party toward a more liberal path continues to be frustrated by a deeply entrenched Kemalist old guard; one that shuns him as an outsider and that bristles at his talk of more freedom for the county’s long-repressed Kurds. Kilicdaroglu has vainly sought to strike a balance between the so-called “dinosaurs” and a younger generation of reformers with whom his sympathies lay. The exclusion of Erbil, the capital of the regional Kurdish government in northern Iraq, from the CHP’s ill-fated Iraqi tour is seen as a further example of Kilicaroglu’s efforts to appease the old guard. “The result is that he comes across as weak and that nobody knows what the CHP really stands for,” complained a CHP lawmaker, who also declined to be identified by name, in an interview with Al-Monitor.

The party has also signally failed to seize the opportunity offered by the mass protests in June. Opinion polls show that the AKP has bounced back, recovering more than 50% of the vote that it commanded prior to the unrest. The CHP continues to trail at a distant second with about 23% of the vote.

Its fortunes are now pinned to nationwide municipal elections that are due to be held in March 2014. All eyes are trained on the jewel in the municipal crown, Istanbul. Landing the country’s commercial capital — where Erdogan first made his mark as a hugely effective mayor in the mid-1990s — “would strike at the AKP’s heart,” reckons Aykan Erdemir, a young CHP lawmaker from the western province of Bursa. “Those who rise to power from Istanbul, fall from power in Istanbul,” concurs Koray Caliskan, a political scientist at Istanbul’s prestigious Bosporus University, in an interview with Al-Monitor.

Mustafa Sarigul, the streetwise mayor of Istanbul’s Sisli district, is seen as the CHP’s most likely candidate for Istanbul. Should he be nominated most observers agree that the race will be tight and that Sarigul might even win. He is said to have clinched Kilicdaroglu’s support. But true to form, the old guard is scrambling to come up with its own candidate. It is impossible to predict whose man will prevail. What is certain though is that should their squabbles persist, the AKP may well rule not only Istanbul but also Turkey for further years to come.