Will Turkey’s CHP reconcile with Islam?

Turkey’s main opposition leader is seeking to reconcile his party with the pious masses, but faces both their deep-rooted suspicions and the resistance of his own hard-core secularists. 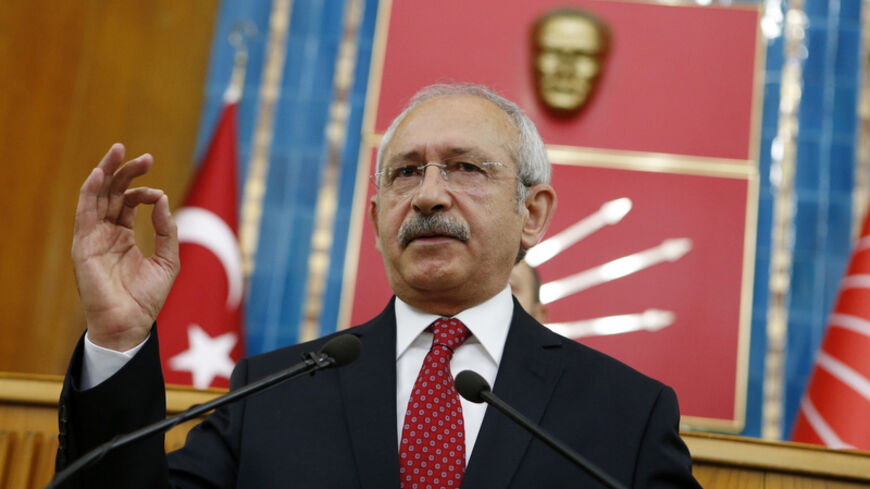 As I began writing this article, Turkey’s main opposition Republican People’s Party (CHP) was holding an extraordinary convention. In a lengthy speech, CHP Chairman Kemal Kilicdaroglu fought against accusations from the in-house opposition that the center-left CHP was “shifting to the right.” At one point, he made quite an interesting remark: “They say the CHP is an elitist party. I have respect for the elites; they are enlightened people. But there are some elitists who are trying to save Turkey at the raki tables. Let it be perfectly clear to anyone: I will purge those people from the party.”

Kilicdaroglu’s comments — by which he meant party members who only rail about Turkey’s problems with no real effort to reach out to the people — quickly reverberated. His rebuke about “saving Turkey at the raki tables” was seen as a sign that the CHP is changing, with some condemning it and others silently taking note.

And why did this particular reference to the “raki table” stir passions? The answer is simple: as all alcoholic drinks, raki is considered sinful in conventional Islam. And for large segments of Turkish society, “the raki table” is a notion that evokes irreligiousness. Remarkably, “the raki table” is also widely associated with the CHP’s eternal leader, Mustafa Kemal Ataturk, whose fabled “raki table” — a ritual he repeated every evening — often doubled as a venue to discuss state affairs.

What was Kilicdaroglu trying to say? Is he really shifting his party to the right?

“Shifting to the right,” I believe, is quite an ambiguous description of the CHP’s problem. The actual question is this: Can the CHP reconcile with “conservative religiosity” — a trait that applies, to a varying degree, to at least 70% of Turks?

Kilicdaroglu is trying to do exactly that. In fact, this has been his most remarkable endeavor since he assumed the CHP leadership in 2010. His effort is clearly evidenced in the lesser emphasis he puts on “secularism” compared with his predecessor, Deniz Baykal. Moreover, when he speaks of “secularism,” he refers in stronger terms to “freedom of religion and conscience.”

The most striking manifestation of the changing CHP is perhaps the party’s abandonment of its animosity toward the Islamic headscarf. Under Baykal, the CHP was virtually obsessed with the headscarf — so much so that barring veiled students from universities was almost its No. 1 mission all throughout the first decade of the 2000s. Kilicdaroglu’s ascent to the helm marked an end to that attitude and replaced it with a new rhetoric calling for “embracing everyone.”

In addition, the CHP welcomed into its fold figures with rightist backgrounds or Islamic profiles, and nominated some of them to prominent positions. Mansur Yavas, for instance, ran for Ankara mayor, while Ekmeleddin Ihsanoglu contested the presidential elections. In the latest example, Mehmet Bekaroglu — a conservative politician and a leading voice of the “Islamic left” in Turkey — joined the CHP last week.

Will these steps bear fruit?

The intraparty dissidents argue that Kilicdaroglu has failed, as the CHP keeps losing elections to the Justice and Development Party (AKP). Yet, they refuse to acknowledge that the party’s vote, which stood at 20-21% under Baykal, has risen to 27-28% under Kilicdaroglu.

Therefore, Kilicdaroglu’s “new CHP” vision does bear fruit. The progress, however, is not as much as desired. The likely reason for this is perhaps the inadequate scale of renewal.

Then what is the CHP supposed to do to boost its vote to the 40% benchmark and become a serious challenge for the AKP?

There is a lot to do, obviously. First, the party needs to inject confidence in the public that it is capable of running the economy. The masses have to be assured that when the CHP comes to power, they will have deeper pockets and better education, health and transport services.

This notwithstanding, the CHP has to come to terms with its chronic problem — that is, to reconcile with religion. And this will take more than just recruiting devout figures to the party.

The main obstacle lies in the CHP’s authoritarian understanding of secularism, which is rooted right in the Ataturk era. The party needs to open an internal debate on this understanding, criticize it and come with a reassessment before the public. In the eyes of the pious Anatolian electorate, the CHP remains the heir of a tradition that banned the Arabic call to prayer, shut Quran courses, imprisoned Muslim clergymen and humiliated the devout. The memory of those practices, enforced in the 1930s during the Ataturk era, continues to repel the conservative masses —Turkey’s largest electoral bloc — from the CHP.

But while trying to reach out to those masses, Kilicdaroglu is faced with the risk of alienating the CHP’s hard-core Ataturkist voters. Their resentment burst out into the open this summer as many boycotted the party’s candidate, Ihsanoglu, in the Aug. 10 presidential polls.

To overcome the dilemma, the CHP needs to revisit the Ataturk era, honestly and unreservedly. The party does not need to denounce or disown Ataturk; it has to reassess Ataturk’s policies in their historical context and acknowledge that they might have contained mistakes.

In other words, what the CHP needs today is not a dogmatic but a new, progressive Ataturkism. It needs to declare that Ataturk’s actions were shaped by the conditions and ideologies of his times. He will remain as the CHP's inspiration, but today the party must be guided by the norms of the modern world and the European Union.

Is there such a trend in the CHP?

Definitely, there is. The clash between this trend and the more dogmatic Ataturkism was exposed most recently by the inauguration of a women-only beach in the Mediterranean city of Antalya. CHP parliament member Aylin Nazliaka condemned the beach as “backward and unacceptable.” Her orthodox Ataturkist reaction was countered by fellow CHP lawmaker Binnaz Toprak, who asserted that “everybody has the right to swim in the sea” — a liberal attitude reflecting respect for different lifestyles.

It should be noted that Toprak, a former political sciences professor at Istanbul’s Bogazici University, is an Ataturkist, too. Yet, her understanding of 21st-century Ataturkism calls not for dictating a single “modern life” for women, but emancipating them in the lifestyles of their own choice.

It is Toprak’s approach that shows the way forward for the CHP if it wishes to break free from its ossified spot in the opposition and stake a claim in governing Turkey. In other words, the party needs to reconcile its ideology with religiosity rather than just transferring religious figures into its ranks.

It remains to be seen whether Kilicdaroglu can pull off this transformation. What is certain today is that he is trying.