Keen to unseat the ruling party in the June 7 polls, the Republican People's Party has recruited the Benenson Strategy Group, a US company that crafted President Barack Obama’s campaign. 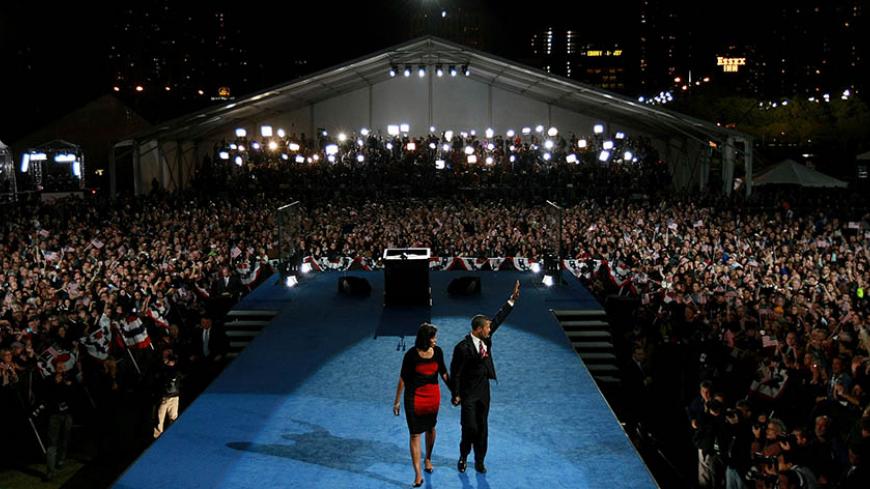 US President-elect Barack Obama and his wife Michelle wave to the crowd as they walk off stage after Obama gave his victory speech during an election night gathering in Grant Park in Chicago, Illinois, Nov. 4, 2008. - Getty Images/Justin Sullivan

“Previously, we would invite a company and give them our party program to craft an electoral campaign to explain it to the people. This time, we are heading to a critical election of vital importance for the country: Turkey will either derail from the track of democracy into a one-man regime, dictatorship and fascism, or the AKP will be unseated and democracy and the secular republic will be put back on track,” Toprak told Al-Monitor.

“Hence, we’ve adopted a different strategy this time. We had meetings with both local and international strategy and communication companies. Eventually, we reached an agreement a few days ago with BSG, which led President Obama’s last electoral campaign. In addition, we made agreements with several local companies in the field of communication, media and PR to work together with BSG,” Toprak said.

But can an American group have a full grasp of Turkish voter behavior, priorities and expectations? How will they craft a realistic strategy?

In response to this question, Toprak explained their choice: “Communication and strategy, the crafting of political messages, analyzing society to determine its priorities and preferences are now global, scientific issues. The fieldwork is already close to completion. BSG has very distinctive methods of research, probing and message-crafting. It has performed very successfully in this field not only in the United States but in about 30 other countries. Moreover, our own colleagues, experts and assistants are working with them.”

Toprak also offered a broad view of the CHP strategy for the coming elections: “A strategy is being crafted to combine the CHP’s and the people’s priorities. In the past 13 years, the AKP polarized society and antagonized people against each other. Also, it created millions of jobless and impoverished people. The people’s priorities have changed. The people are now preoccupied with how they make ends meet, how they find a job tomorrow. They are scared and desperate for their children’s future. As a result, issues such as democracy, human rights, judicial independence and the freedoms of press, expression and thought have slipped down on their priority list. But along with those popular priorities, the CHP has priorities such as democracy, secularism, republican principles and values, judicial independence, human rights and Ataturk’s principles. Hence, our election strategy will be based on combining and harmonizing those priorities so that the people can embrace and prioritize them.”

Toprak added, “The fieldwork, opinion polls and surveys all show that the presidential system [promoted by President Recep Tayyip Erdogan], or a one-man regime is not on the people’s agenda. That’s very clear and palpable. … Moreover, the opinion polls we have commissioned indicate that support for the AKP is declining fast, while the opposition and especially the CHP are on the rise. With our election strategy and campaign, we’ll reverse the AKP’s artificial agenda. We’ll not fall into their trap of creating an artificial agenda and then dragging us into debating it. On the morning of June 8, we’ll see a new government in Turkey.”

When reached by Al-Monitor, BSG declined to comment on their relationship with the CHP.

Along with BSG, the CHP has recruited Ali Taran, known as the “prodigy of advertising” in Turkey, to coordinate the party’s election campaign.

In the 2002 polls that brought the AKP to power, Taran crafted the election campaign of the Youth Party, which was led by businessman Cem Uzan, the owner of Rumeli Holding, one of Turkey’s leading conglomerates at the time with interests in media, industry, telecommunication and energy. Thanks to Taran’s campaign, the newly established Youth Party managed to garner more than 7% of the vote, narrowly failing to overcome the 10% threshold required to enter parliament.

In the CHP election center on the 13th floor of the party headquarters in Ankara, BSG is working together with local PR and advertising companies. The fieldwork is also conducted jointly. Additionally, the CHP has created a large social media team comprising university students, communication experts and young people.

In the presidential elections last year, the social-democrat CHP came under fire for fielding a conservative candidate, Ekmeleddin Ihsanoglu, in a bid to open up to right-wing voters. This time, the party management has decided to determine its candidates through preliminary polls with the votes of party members. CHP grassroots will now decide 85% of party candidates, with only 15% left to Chairman Kemal Kilicdaroglu to decide, an authority he has under the party statute. The objective is to invigorate party grassroots and inject them greater enthusiasm as they campaign for candidates of their own choice.

Toprak denied the CHP would again field candidates of right-wing backgrounds, dismissing such speculation as an AKP campaign of “media spin” aimed at demoralizing CHP grassroots.

“We have no such approach whatsoever. Our candidates for parliament will be people of leftist social-democrat standing who have toiled for the party within the party and who embrace CHP and republican values. That’s the definite stance of the party’s chairman and management,” Toprak said.

“In each election, we had certain candidates from the right who espoused republican values and CHP principles … but their number never exceeded a few. Thus, speculation that the party will open up to the right, or that the party has shifted to the right is baseless. … Our parliament members will be people picked up and embraced by the grassroots,” he added.

Meanwhile, various moves suggest that electoral alliances may be formed ahead of the polls. The head of the Democratic Left Party, Masum Turker, paid a visit to the CHP leader last week, proposing to join forces for the polls. Representatives of the two parties have already begun talks to that effect. Contacts are also under way with the Freedom and Solidarity Party and the United June Movement, formed by various groups that backed the Gezi Park protests in 2013.

In striking comments last week, Deputy Prime Minister Bulent Arinc said, “Fifty percent of society looks at us, the AKP, with hatred. The people have become polarized and ossified. This could make Turkey an ungovernable country. Interest-oriented politics had finished the Motherland and True Path parties. Can this happen to the AKP as well? It can.” Arinc’s remarks could be seen as a sign of in-house rifts and growing uneasiness of an electoral failure within the AKP.