The jury’s out on whether a pledge by Turkey’s six opposition parties to bring back the parliamentary system is an agreement on the lowest common denominator or a historical pact that would unseat Erdogan. 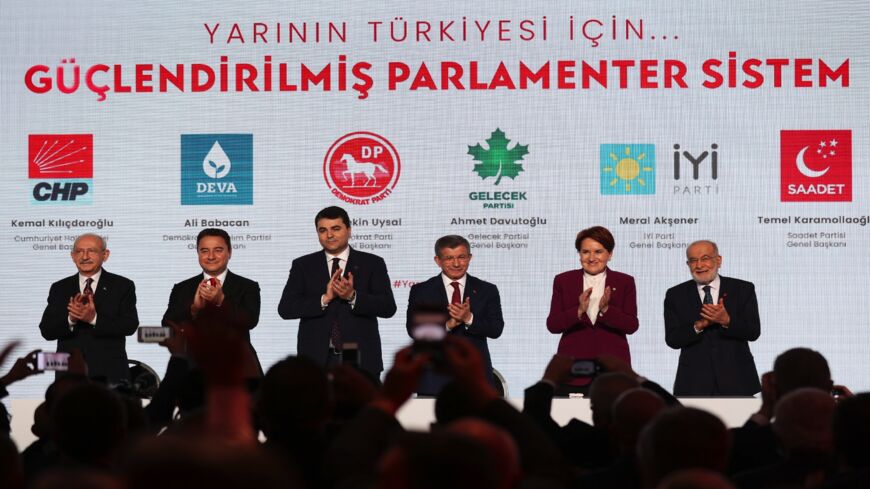 Standing against a white backdrop that boosted an image of Turkey’s parliament, leaders of six opposition parties made a joint declaration Monday on restoring the rule of law and freedoms in Turkey after two decades of “unchecked one-man rule.”

“The unchecked powers [of the president] has deepened the problems of Turkey,” Muharrem Erkek, deputy chair of the main opposition Republican People’s Party (CHP), said as he explained the 40-page accord to an audience of party members, journalists and representatives of the nongovernmental associations in Ankara.

“The presidential system (which was launched by the Justice and Development Party [AKP] in 2017, a year before Erdogan was elected president) has led to an arbitrary one-man rule as the president took over the role of the legislative, executive and judiciary through wide-ranging and unchecked powers. We are determined to build a new system [of strengthened parliamentary democracy] based on the mistakes of the past,” he added.

Kemal Kilicdaroglu, leader of the social-democratic CHP, and his long-standing ally Meral Aksener, leader of the center-right Iyi Party, were joined by Ali Babacan of the DEVA Party, Ahmet Davutoglu of the Future Party, Gultekin Uysal of the Democrat Party and Temel Karamollaoglu, leader of the Saadet Party, in signing the interparty agreement. The six parties have been working on a political cooperation accord since September 2021 and agreed on the principles two weeks ago. They have, however, left the signature ceremony to Feb. 28. The date marks the anniversary of the 1997 “post-modern coup,” when the country’s generals toppled the coalition government of Necmettin Erbakan, mentor of President and AKP leader Recep Tayyip Erdogan and Karamollaoglu. Aksener was the interior minister of the toppled government.

The journey to the signature ceremony has been arduous given ideological divides on crucial issues such as the Kurdish question, secularism and LGBT rights. The country’s third-largest political party, the left-wing and pro-Kurdish Peoples’ Democracy Party (HDP), was conspicuously absent from the coalition. However, the party also backs a return to the parliamentary system.

HDP co-chair Pervin Buldan kept her party’s distance to the accord. “We will never accept an alliance that imposes a deadlock to the Kurdish issue or [turns a blind eye] to inequality of any sort, to workers’ rights … and to women,” she told her party Monday, alluding to the absence of these issues from the accord.

The six parties’ promises include lowering the electoral threshold to 3% from the present 10%. The new laws will also allow public funding to political parties that obtain 1% of the votes at national-level elections instead of the current 3%. Both are crucial points for four of the signatories whose votes are around 1% to 3%, according to pollster MetroPoll. The same poll, carried out between Feb. 12-17 in 26 provinces, said that if there were elections this Sunday, the AKP and its ally the Nationalist Movement Party’s vote would be around 30%, and the six parties would collectively harness 35%, with HDP roughly at 11% — more than 11% are undecided.

Under the new, strengthened parliamentary system, the president's powers will be even less than they were under the past parliamentary system that had been in effect between 1923 and 2017. The president will serve a single seven-year term without the possibility of re-election. Once their post is over, they will not be able to hold political office again. In addition, the president would not be able to veto or declare emergency rule without the approval of parliament.

The signatories also promise to reverse the democratic backsliding by boosting the independence of the judiciary, removing barriers on freedoms of expression and the press, and fighting graft. In a wink both to international circles and pro-EU voters, the text pledges to improve Turkey’s faltering ties with Europe and ensure that the European Court of Human Rights’ decisions are implemented. The last point is a reference to the case of Osman Kavala, a philanthropist and businessman whose four years behind bars without a conviction spurred a disciplinary process against Turkey in the Council of Europe.

“This is a far-reaching text beyond expectations, not just the transformation to a strengthened parliamentary from the existing presidential system. It addresses political ethics, social policies, domestic violence, environment, media rights and freedoms. It is a vision statement and a response to the questions on just what they will do if they come to power,” said Hatem Ete, chairman of Ankara Institute, in a panel discussion called “Turkey on the Threshold.”

But it skirts an economic policy — something many would have expected to see given that Babacan was the former economy tsar of Erdogan and that the faltering economy, lost purchasing power and sky-rocketing inflation are the top grievances of Turks. It does, however, promise to restore the autonomy of the central bank, which is currently under the president’s thumb.

“The text reflects the fracture lines among the signatories,” journalist Sirin Payzin, host of the news program “I Have Something to Say” on pro-CHP HalkTV, said after the signature ceremony. “There is nothing on the need to curb the role of Turkey’s powerful Religious Affairs General Directorate nor on secularism. The Kurdish question is not mentioned, and Turkey’s re-entry to the anti-violence Istanbul Convention is omitted.”

The omission of the Istanbul Convention has brought disgruntled murmurs from the audience in the ceremony. Both Aksener and Kilicdaroglu had pledged that reversing Erdogan’s decision to withdraw from the convention would be one of their first acts in office. The reluctance in explicitly naming the convention was attributed to the influence of Saadet, the most religiously conservative party in the pack, whose voters consider the accord one that protects and encourages the gay community.

“I think it would be equally wrong to portray this text as a cure-all to Turkey’s problems or to focus on all missing points and dismiss it,” Ete said. “This accord is a declaration of intent that brought the widest-ever consensus among political parties. New points can and would be added as we approach the elections.”

The question is whether the accord brings the opposition any closer to victory in elections. Turkey will hold both parliamentary and presidential elections by mid-2023, and the opposition’s choice of a candidate against Erdogan, who aims to run for a third term, remains crucial. In other words, the opposition has to have a strong presidential candidate who can win the presidential election to bin the executive presidency system. The opposition has carefully refrained from naming a candidate, though the names of the two CHP mayors, Ekrem Imamoglu of Istanbul and Mansur Yavas of Ankara, came up. So did the name Kilicdaroglu. The suggestion in the text that the president would bow out of politics after serving his term seems to point out to an elder politician rather than a younger one. Imamoglu, aged 51, has a long political career in front of him.

Ete points out the two main questions after the opposition parties’ accord. “Can such a fractured group govern Turkey, which is facing diverse political and economic problems? Could it lure the conservative votes, who fear that they would lose what they have gained under the AKP rule?” he said at the panel.

Both points are fiercely used by the AKP and the pro-government media. AKP officials from Erdogan down have referred to the pact as a throwback to a past when Turkey was “ruled by coup-mongers.” Pro-governmental media kept the news of the accord out of their top headlines. “This is not a strengthened parliamentary system but strengthened incertitude,” wrote Okan Muderrisoglu, the Ankara bureau chief of the pro-government Sabah, claiming that many of the points on human rights, balance of powers and good governance could simply be solved with a presidential decree or a framework law rather than an overhaul of the system.

“These parties have nothing in common … aside from the fact that they yearn for old Turkey, but time does not flow backward,” tweeted Bulent Turan, a member of the AKP.