Third alliance enters the fray ahead of Turkish elections

The leftist Labor and Freedom Alliance pledges to undo injustice but could risk a split in the opposition vote. 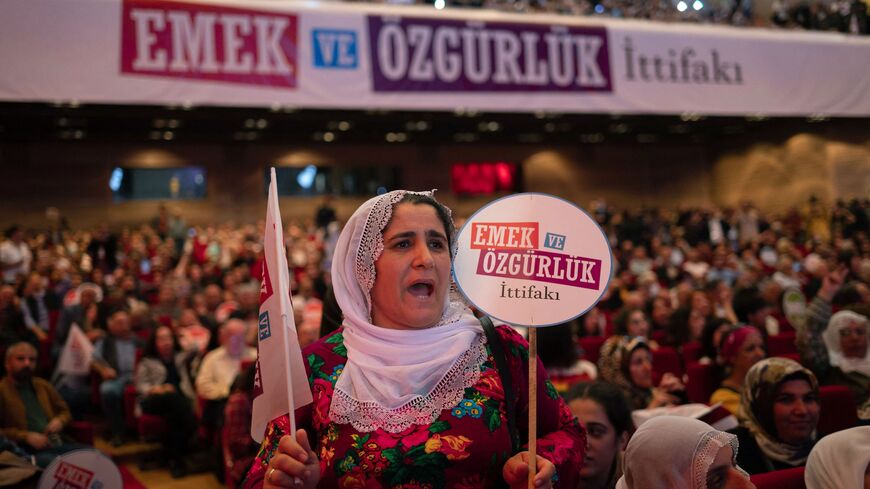 Supporters attend a congress to launch the "Labour and Freedom Alliance", a six party coalition led by the HDP, in Istanbul on Sept. 24, 2022. - YASIN AKGUL/AFP /AFP via Getty Images)

ISTANBUL — A third political alliance has been announced for Turkey’s upcoming parliamentary and presidential elections, leaving observers wondering about its potential impact on what was previously a two-horse race.

The Labor and Freedom Alliance is a coalition of six left-wing parties, with the Peoples’ Democratic Party (HDP) by far the dominant element with 56 lawmakers in the Turkish Grand National Assembly as Turkey’s third biggest parliamentary party.

The Workers’ Party of Turkey (TIP) is the next largest with four legislators in parliament, while the other groups — the Labor Party, the Social Freedom Party, the Labor Movement Party and the Socialist Assemblies Federation — have no parliamentary representation.

The creation of a third force in Turkish politics comes in addition to two existing coalitions: the People’s Alliance of the ruling Justice and Development Party (AKP) and the Nationalist Action Party (MHP), and the opposition Nation Alliance composed of the Republican People’s Party (CHP), the Iyi Party, the Democrat Party and the Felicity Party.

The Nation Alliance is also supported by two parties led by former AKP ministers to form a “Table of Six.”

At its inaugural congress in Istanbul on Sept. 24, however, the new bloc left little doubt that its main goal was to overthrow the AKP-MHP group in elections due to be held by June of next year.

The alliance announced a program to “stop the destruction created by the People’s Alliance in many areas from economy to politics, to end the one-man rule [of President Recep Tayyip Erdogan], to improve the working and living conditions of the people, to ensure a change and transformation on the basis of democratic rights and freedoms.”

With the foundation of a new alliance, the opposition will face the risk of splitting its vote. Central to preventing this will be a presidential candidate that both opposition blocs can support.

Voices within the HDP, which has roots in Turkey’s Kurdish rights movement, have said they would not support a right-wing nationalist candidate such as the CHP’s Ankara Mayor Mansur Yavas.

More favorable candidates for the left would be CHP leader Kemal Kilicdaroglu or possibly the party’s Istanbul mayor, Ekrem Imamoglu.

“If they go for a more right-wing candidate, I think the leftist alliance will nominate its own candidate,” said Berk Esen, assistant professor of political science at Istanbul’s Sabanci University.

Elements within the Nation Alliance — particularly among the nationalist Iyi Party — have also ruled out sitting down with the HDP because of its alleged ties to Kurdish militants.

Ozer Sencar, president of polling firm MetroPoll, warned that such differences would have to be put aside.

Esen said the third alliance can make a greater difference in the election for the 600-seat parliament, where it could target the AKP’s working-class base most affected by the current economic crisis.

“They need to figure out a way to get support from voters who would not have voted for the CHP,” he told Al-Monitor. “That basically goes to either the HDP mobilizing the Kurdish urban poor living in western cities or non-unionized workers who generally vote for the AKP."

“The real game-changer would be TIP generating votes from the workers who would otherwise vote for the AKP for whatever reason.”

Another problem facing the leftists is the closure case looming over the HDP for its alleged links to the Kurdistan Workers Party (PKK). The Constitutional Court accepted the indictment in June last year.

“At this point, I don’t think even Erdogan is settled on that question,” Esen said. “He’s still trying to determine if it will benefit him more if the HDP stays on as a distinct political party or whether it's banned. All this will determine not just the outcome of the elections but particularly what happens to the leftist alliance.”

With the HDP polling at around 13%, according to the latest survey from MetroPoll, the alliance could expect between 14% and 15% of the vote in the parliamentary race, MetroPoll’s Sencar said.

“In my opinion, if they act in an organized and integrated way with the [Nation Alliance], the votes will rise to 14, 15 points. This shows us very clearly that this group is a key party movement,” he added.

In an interview with Duvar, HDP deputy co-chair Tuncer Bakirhan put the alliance’s potential support as high as 20%.

In its bid to win votes, the new coalition condemned government practices that “prioritize … its own crony companies and holdings” — a reference to the allocation of lucrative public tenders to pro-government businesses.

As well as economic justice, the parties pledged to reverse Turkey’s anti-democratic slide, particularly under the presidential system of government introduced in 2018.

The call to repair and bolster democratic institutions echoes that of the Nation Alliance, which has promised to abolish the system that concentrates power in Erdogan’s hands.