MHP leader Devlet Bahceli's decision to back negotiations with the HDP over a constitutional amendment hints at an election strategy for Turkey’s ruling alliance. 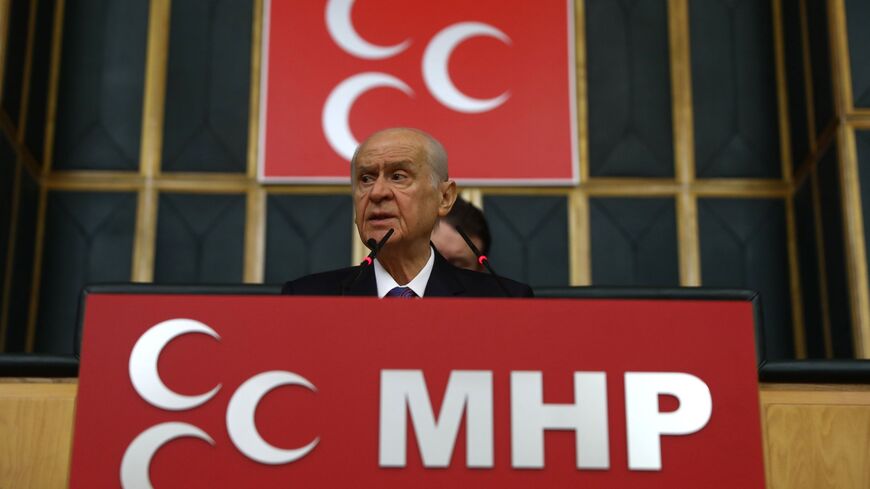 ISTANBUL — When Turkey’s ultra-nationalist leader Devlet Bahceli rose to address his lawmakers in parliament this week, many expected signs of a split in his party’s alliance with the governing Justice and Development Party (AKP).

The source of the anticipated schism was the AKP’s meeting a few days earlier with members of the Peoples’ Democratic Party (HDP), the left-wing group that has its roots in the Kurdish movement. Bahceli, in particular, has accused the party of supporting terrorism.

Instead, the firebrand politician, who has led the Nationalist Movement Party (MHP) for the last 25 years, offered his support to the talks on constitutional change.

“It is a natural step to negotiate with the HDP for the work on the constitution,” Bahceli said on Tuesday.

Prior to his speech, Orhan Uguroglu, Ankara correspondent for the nationalist Yenicag newspaper, asked whether the AKP-MHP pact had “collapsed” over the HDP meeting. “Will MHP Chairman Devlet Bahceli call for an ‘early election’ in the parliamentary group tomorrow? Ankara is shaking,” he tweeted.

The Nov. 2 talks between an AKP delegation led by Justice Minister Bekir Bozdag and HDP officials were a surprise to many observers.

The government has in recent years sought to portray the HDP as the mainstream political arm of the outlawed Kurdistan Workers Party (PKK), which has waged a 38-year insurgency against the Turkish state and is designated a terrorist organization by the United States, the European Union and Turkey.

The HDP — the third largest party in the Turkish parliament — is also the subject of a legal case calling for its closure and the banning of hundreds of its members from political activity.

Bahceli has probably been the loudest voice calling for the shutdown of the party. When the Constitutional Court last year returned the indictment in the case for procedural changes, Bahceli called for the court itself to be abolished.

The AKP engaged in talks with the HDP and two other opposition parties last week in a bid to secure support for its proposed constitutional change to protect Muslim women’s right to wear the headscarf and guard family values against what President Recep Tayyip Erdogan called “deviant currents” — a reference to the LGBTQ community.

The AKP-MHP alliance does not currently have enough parliamentary support to either push the change through parliament or take it to a referendum, as Erdogan has pledged to if necessary.

Engin Altay, deputy chair of the Republican People’s Party (CHP) parliamentary group, accused Bahceli of “political inconsistency” in his approach to the HDP. The MHP leader and AKP figures have accused the CHP, the largest opposition party, of backing terrorism when it has supported the HDP.

“We say this all the time: The terrorist organization is separate; the party in parliament is separate,” he told Cumhuriyet, referring to the PKK and HDP.

“When they consider the HDP, they say ‘It is a legal party like the AKP,’ and when it doesn’t work for them, they say ‘HDP is the same as the PKK.’ This is political inconsistency. It is one of Turkey’s biggest problems.”

Even senior AKP figures questioned the approach. “If [the HDP] is a political extension of the PKK and a party that should be dissolved, why are we talking to them about the constitution?” tweeted Samil Tayyar, member of the AKP’s executive board.

Veteran journalist Murat Yetkin, meanwhile, suggested talks with the HDP could alleviate pressure on the party.

“It is known that there are those within the AKP who are against the closure of the HDP despite the MHP’s desire,” he wrote. “It is said in the political backstage that the HDP closure case is unlikely to be concluded until [next year’s] elections, especially now that the dialogue has begun.”

Preventing the HDP from backing an opposition candidate from the CHP at parliamentary and presidential elections due in June would be a major strategic success for the governing alliance.

“It makes sense for Erdogan to negotiate with the Kurds,” said Berk Esen, assistant professor of political science at Istanbul’s Sabanci University. “If they could be persuaded to nominate their own candidate in the first round and not vote in the second round, that would be a big coup for Erdogan.”

Esen pointed to efforts to manipulate the Kurdish vote in the rerun of the 2019 local election in Istanbul, when a leaked letter from imprisoned PKK leader Abdullah Ocalan was interpreted as calling on Kurds not to support the opposition candidate.

“Bahceli not only endorsed this initiative, but he even went out of his way to appeal to Kurds to follow Ocalan’s line,” he told Al-Monitor. “Bahceli has been very pragmatic about his support for the ruling coalition and, in terms of political survival, Bahceli has been willing to support Erdogan on many key turning points.”