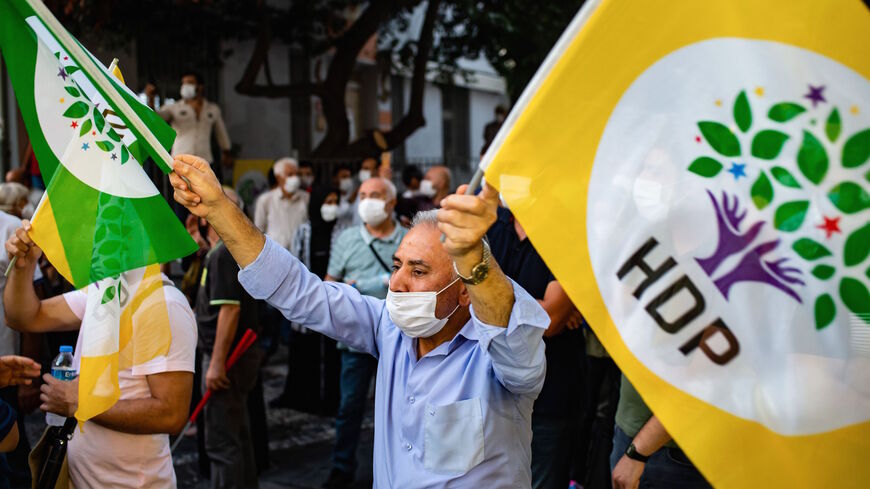 A man holds HDP flags as members of the pro-Kurdish People's Democratic Party (HDP) take part in a protest against the detention of HDP members, in Istanbul, on Sept. 25, 2020. - YASIN AKGUL/AFP via Getty Images

The original version of the indictment was filed earlier this year and rejected on procedural grounds. On June 7, Turkey’s Chief Public Prosecutor of the Court of Cassation Bekir Sahin resubmitted a revised document, which judges in the nation’s top court unanimously accepted on Monday, opening the way for a trial that could shutter the HDP in the coming months.

In the 843-page indictment, Sahin alleges the HDP is seeking to “destroy the unity of the state” and fosters ties with the Kurdistan Workers Party (PKK), a designated terrorist group in Turkey, the United States and the European Union, a claim HDP officials deny.

Through evidence that has yet to be made public, the prosecutor demands the full closure of the HDP, a five-year political ban on 451 party members and, after a review by Constitutional Court judges, the possible freezing of HDP bank accounts through which the party is expected to receive about $7.7 million in 2021 from the Turkish treasury.

In recent years, the HDP, which won 11.7% of the electorate — or about 6 million votes — in the 2018 parliamentary elections, has seen thousands of members face trial, dozens of elected officials replaced by state-appointed trustees and its former co-chairs, Selahattin Demirtas and Figen Yuksekdag, imprisoned since 2016, nearly all on terror-related charges.

Critics denounced the closure case as an attempt by the AKP-MHP collation to weaken and divide opposition parties ahead of elections currently scheduled for 2023, and to boost slumping poll ratings amid an economic downturn worsened by the COVID-19 pandemic.

Responding to the Constitutional Court decision to hear the case Monday, HDP co-chair Mithat Sancar claimed the indictment was prepared in the MHP central office and finalized by legal units at Erdogan’s Presidential Palace, vowing to fight allegations lodged against the party.

“We will continue to defend our party, our people and the will of our people using all our legitimate rights on the grounds of democratic politics, and we will not have the HDP shut down,” Sancar told reporters at a press conference on Monday.

Court proceedings are expected to take months, possibly years, but the next steps include sending the indictment to HDP officials, who will then be tasked with crafting a defense within 30 days and can request an additional 30 days if needed, according to Osman Can, a law professor at Marmara University and former rapporteur-judge for Turkey’s Constitutional Court.

The earliest possible ruling could come by January 2022, Can said, if the case is expedited by Constitutional Court head Zuhtu Arslan.

“It’s a political case; it’s very important. And in [such] cases, the president has always accelerated the process,” Can told Al-Monitor. “This is how Zuhtu Arslan tends to act.”

Can added, “There won’t be a postponement of the decision-making process. I would say within one year we will have a decision.”

For the HDP to be shuttered, 10 of the court’s 15 judges would need to agree the party colludes with PKK militants and is trying to divide Turkey along ethnic lines. Can said the new indictment was likely a formalized version of the one filed in March in which he claimed 95% of evidence was based on speeches critical of AKP and state policies given by HDP members.

If the evidence is largely rhetorical and not based on actions taken by party members, Can said a ruling for the HDP’s closure would be met with international scrutiny and condemnation from top legal bodies, including the European Court of Human Rights.

“Legally, I think [the evidence is] not enough to close a political party … but we are living in Turkey and the Constitutional Court is unfortunately overfilled with members appointed by the president himself,” Can told Al-Monitor.

Prior to the ruling, the impacts of the court proceedings could materialize in different forms that may shape Turkey’s foreign and domestic political agendas in the months to come. Berk Esen, an assistant professor of political science at Sabanci University, noted the indictment was accepted a week after Erdogan’s first meeting with US President Joe Biden on the sidelines of a June 15 NATO summit, and pressure on the HDP could be linked to concessions aimed at appeasing both Western governments and the Turkish leader’s nationalist allies.

Esen said Erdogan may soon agree to reverse course on one or more foreign policies deemed disruptive by NATO allies, such as migration or energy-prospecting activities in the Eastern Mediterranean, and in return requested Western leaders hold back criticism regarding Turkish domestic politics, as with the HDP closure case, which would help to quell possible blowback from MHP allies over concessions offered on the international stage.

“I think Erdogan is trying to secure some kind of deal with Biden and maybe even the EU by making concessions in foreign policy so he will be able to stabilize domestic politics,” Esen told Al-Monitor. “If there’s no Western pressure left, the government can easily close down the HDP.”

The HDP case may also serve to divide opposition parties that, through partnerships, have secured electoral gains against the AKP-MHP coalition, Esen said, adding the main opposition Republican People’s Party (CHP) is likely to condemn the indictment as undemocratic as its officials have done in the past, while nationalist IYI party officials will be more inclined toward silence on the issue.

Depending on how opposition parties respond, the coming legal proceedings could also lead to disenchantment among the party’s supporters, who might abstain from voting or supporting other opposition groups if the HDP were to close, Esen said.

“Erdogan is extremely worried that he’s going to lose the election, and at this point, I think, he doesn’t really have a lot of strategies left,” Esen told Al-Monitor.