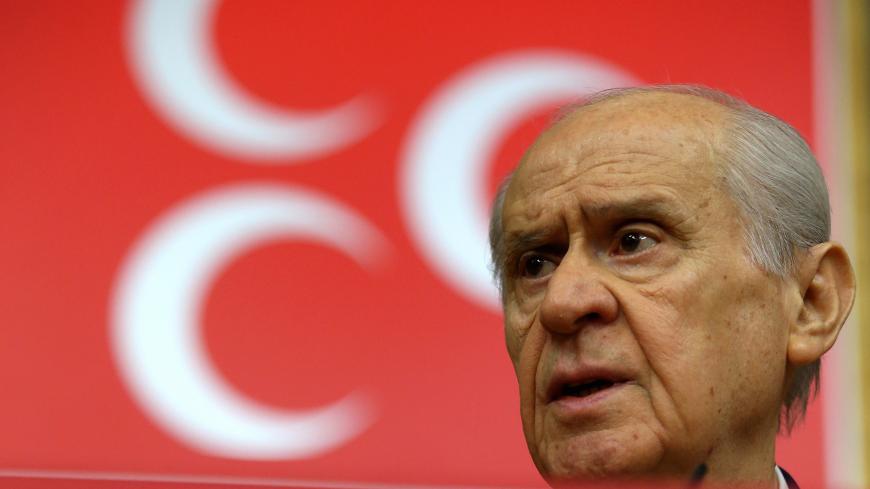 ISTANBUL — While Turkey’s next general elections are scheduled for 2023, an economic slowdown stemming from the coronavirus pandemic is shifting the nation’s political dynamics and giving rise to rumors that snap elections might be called in the not-so-distant future.

Last week, Devlet Bahceli, head of the Nationalist Movement Party (MHP), added fire to such speculation by proposing changes to electoral laws. The measures would make it more difficult for members of parliament to join newly formed opposition parties and pose a more formidable electoral threat to Ankara’s ruling bloc known as the “People’s Alliance,” which is composed of the MHP and President Recep Tayyip Erdogan’s Justice and Development Party (AKP).

Bahceli floated the idea in response to statements by Kemal Kilicdaroglu, leader of the main opposition Republican People’s Party (CHP), who said he was open to transferring some of his party’s deputies to the new DEVA and Future parties to help them reach electoral eligibility, as the CHP had done for the IYI Party ahead of the 2018 elections.

Analysts say Bahceli’s proposals, which would require constitutional amendments through a parliamentary supermajority, may be hard to achieve but signal Turkey’s political players are positioning themselves to best navigate the ongoing COVID-19 crisis and any political fallout it might bring about, including the prospect for early elections.

"Bahceli has bitter memories from the earlier CHP move to lend 15 deputies for Meral Aksener's IYI Party to be able to form a group of at least 20 MPs in the parliament and get into the elections without the need to complete other formalities written in the law,” Murat Yetkin, editor of the Yetkin Report news site, told Al-Monitor. “Bahceli is doing this as a goodwill gesture to Erdogan as a show of his solidarity."

According to Turkish electoral law, political parties are eligible to run in parliamentary elections six months after they hold their first plenary session or if they have 20 deputies already in the parliament. The DEVA and Future parties, led by former AKP members Ali Babacan and Ahmet Davutoglu, respectively, were both founded in the last six months and have yet to hold plenary sessions.

If the CHP transfers deputies to the new parties, as Kilicdaroglu suggested, then the parties might be eligible to participate in the next round of elections, where they might syphon away right-leaning, conservative voters who traditionally vote for the AKP-MHP People’s Alliance.

“Bahceli wants to prevent DEVA and [Future] from participating in the election,” political scientist Burak Bilgehan Ozpek told Al-Monitor. “This also shows that the AKP-MHP coalition’s popularity is declining and right-wing voters might prefer Babacan or Davutoglu due to the economic difficulties.”

Ankara’s political arena has also been swirling with rumors that Aksener might be open to allying with the AKP, with political commentators suggesting she is “looking for a seat at the Presidential Palace’s table.”

Bahceli responded to such chatter by saying that with the pandemic it's best not to sit at a crowded table, but Ozpek said Aksener might be seeking to sway public opinion by playing a constructive role in changing the nation’s political discourse.

“She wants to show the right-wing voters how she is eager to cooperate and how the AKP and MHP are reluctant,” Ozpek told Al-Monitor.

While some analysts doubt the prospects of an IYI-AKP alliance, others say current developments are the early signs of a succession battle, in which leaders in the opposition and within the AKP are vying for influence to lead the country once Erdogan steps down.

Among possible future candidates rising from the ruling bloc are Erdogan’s son-in-law and Finance Minister Berat Albayarak and Interior Minister Suleyman Soylu, whose resignation for the mishandling of COVID-19 measures was rejected by Erdogan, possibly strengthening his stature as an indispensable member of the AKP.

“Snap elections look very irrational, but I think they are possible,” Ozpek said. "The economy will not be better in the following months and the AKP's popularity will continue to decline.”

He continued, “Furthermore, Erdogan's son-in-law Berat wants to take the helm and form his own cabinet as soon as possible. He is not a popular or charismatic figure so he cannot win elections alone. He might use Erdogan and Bahceli to win a snap election and consolidate his position through his own cabinet.”

In this light, Bahceli’s proposal to change the electoral laws might be a “brilliant move,” Berk Esen, an assistant professor of international relations at Ankara’s Bilkent University, told Al-Monitor. Noting Bahceli is also seeking remove parliamentary immunities with greater ease, Esen said the combined measures would “basically freeze the political situation [which] caters to Bahceli, who has been playing with a weak hand and has gained quite a lot.”

Esen added, “When you think that three years ago this man was about to lose the chairmanship within the MHP in a humiliating manner to Meral Aksener, and now fast-forward two or three years and he’s a coalition partner. He’s calling some shots, so I think he’s quite happy with the current situation.”

Through its standing in the ruling alliance, the MHP has introduced a number of proposals to benefit its constituency, including a prisoner amnesty bill that released notorious mob boss Alaattin Cakici along with 90,000 inmates to prevent the spread of COVID-19 in penitentiaries. Among more recent proposals, the MHP has introduced controversial legislation that would require social media users to register their accounts with their national ID numbers.

“These may all be bargaining efforts on Bahceli’s part,” Esen told Al-Monitor, adding the electoral law proposals might also be one of several attempts to gauge the nation’s political climate.

“I think they are releasing balloons and seeing which one of them will float,” Esen told Al-Monitor. “Not many have floated yet.”