An agreement between the AKP and the MHP to cut the vote baseline to enter parliament from 10% is seen as a bid to undermine the opposition. 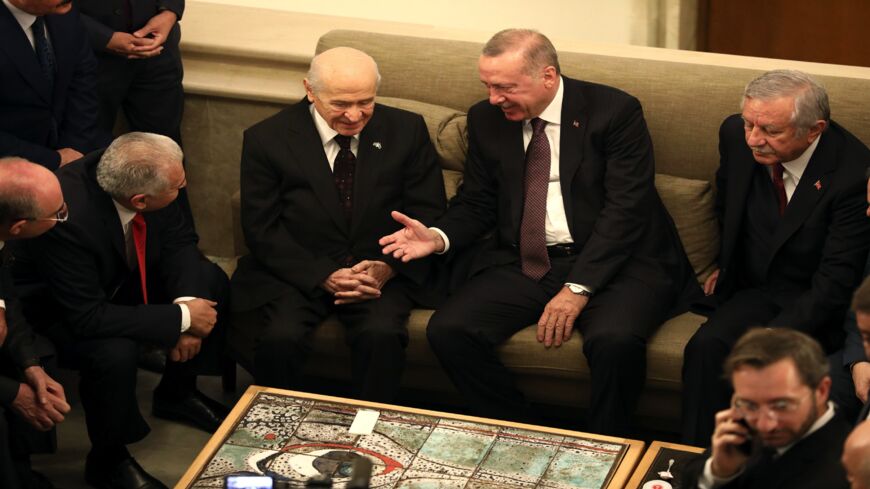 ISTANBUL — Turkey looks set to lower its election threshold for entering parliament — the highest in the world — after party leaders of the ruling alliance agreed to drop it from 10% to 7%.

The current threshold, which was introduced by a military junta in 1983, prevents any political party that receives less than a tenth of votes nationwide from taking a seat in parliament, even if it comes first in a particular constituency.

Over the weekend, President Recep Tayyip Erdogan, who heads the governing Justice and Development Party (AKP), said the reduction had been agreed upon, but he was waiting to hear from alliance partners, the Nationalist Movement Party (MHP).

MHP leader Devlet Bahceli on Wednesday also agreed to the new threshold. “No further evaluation is needed,” he said in a statement.

A draft bill is expected to be presented to parliament, which is controlled by the AKP and the MHP, when it returns in October.

The change is widely seen as benefiting the MHP, which has backed the AKP since 2015 but only entered a formal electoral alliance three years later. In recent years, the nationalists have frequently polled below 10%.

A survey of voting intentions carried out by MetroPOLL, one of the country’s more reliable polling companies, last week showed the MHP receiving 8.9% of ballots.

Amid the perennial talk of an early election — the next is due in 2023 — commentators have speculated on a range of reasons for the change, with many suggesting it indicates friction within the AKP/MHP alliance.

Another party to be significantly affected by the change is the Peoples’ Democratic Party (HDP), a left-wing group with roots in Turkey’s Kurdish movement. The party entered parliament for the first time in 2015 and has since maintained its support at around 10%, thanks partly to the backing of left-leaning non-Kurds in west Turkey.

The HDP currently faces a case in the Constitutional Court that could see it banned — a case largely instigated by Bahceli’s calls for the party to be closed down.

Ozer Sencar, founder and director of MetroPOLL, said lowering the threshold could see non-Kurdish HDP voters — who previously backed the party to put it over the 10% boundary — switch to other parties.

“Some strategic left-wing voters may shift from the HDP to the CHP,” he told Al-Monitor. “I think the votes that might have switched from the AKP to the MHP so that it doesn’t get caught up in the threshold will stay with the AKP.”

He noted that in the 2018 parliamentary election there was a “significant shift” in votes from the AKP to the MHP.

Meanwhile, Nezih Onur Kuru, political scientist at Istanbul’s Koc University, said the AKP would benefit from the HDP’s loss of strategic voters, particularly in the Kurdish-majority southeast where they are direct competitors for ballots.

“The AKP is also likely to ease the political pressure on Kurdish people in order to attract Kurdish HDP voters and those who abstained from voting in the last elections,” he added.

However, Kuru described a strong bloc opposed to Erdogan’s presidential system. The opposition Nation Alliance, composed primarily of the CHP and the nationalist Iyi Party, is “likely to turn into a broad democratic platform to win in both presidential and parliamentary elections,” he said.

He added, “The biggest mistake a government can make is to change the electoral law just before elections.”