The opposition says a proposed amendment to Turkey's election law is designed to look like it will enhance multiparty democracy, but will only help get the ruling party and its allies reelected. 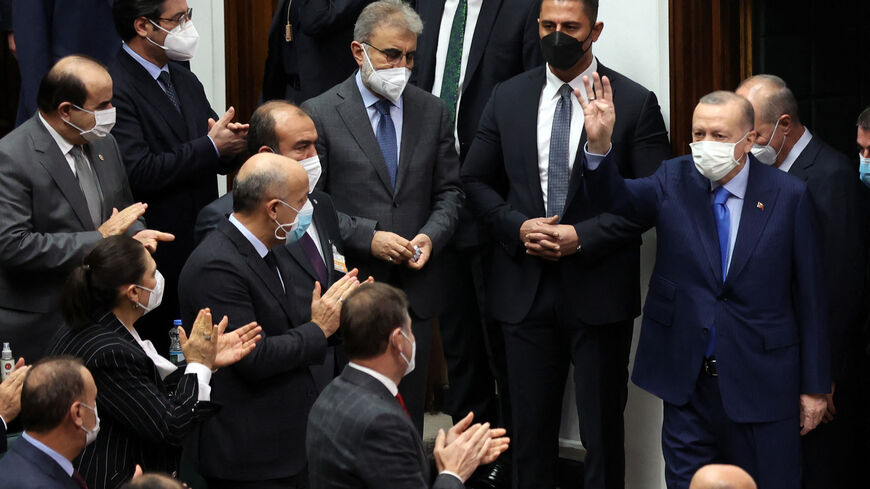 Turkish President and leader of the Justice and Development Party Recep Tayyip Erdogan (R) arrives at a meeting at the Turkish Grand National Assembly in Ankara on Dec. 22, 2021. - ADEM ALTAN/AFP via Getty Images

Turkey’s leading opposition parties say a draft amendment to the election law submitted to the parliament Monday by the ruling Justice and Development Party (AKP) and its nationalist allies is designed to engineer their own victory at the ballot box.

Kemal Kilicdaroglu, the leader of the main opposition Republican People’s Party CHP, said in a parliamentary address today, “There is no power or no law that can prevent us from unseating you.”

Mithat Sancar, co-chair of the pro-Kurdish People's Democratic Party (HDP), told his group of lawmakers in the chamber today, “All governments that resort to such games have always lost before the strong will of the people. These are vain attempts.”

The 12-point document brings a number of significant changes that the government insists will enhance multiparty democracy. They include lowering the threshold for a party to win parliamentary seats from 10% of the national vote to 7%. In theory, this should work to the advantage of smaller parties. But the bill also says that candidates running on a joint list will need to clear the seven percent threshold even if their alliance wins the overall vote in a given constituency.

Analysts say the latter change is intended to drive a wedge in the existing opposition bloc formed by the CHP and the right-wing conservative Iyi or Good Party and four smaller parties, including the pro-Islamic Saadet, former Economy Minister Ali Babacan’s Deva and former Prime Minister Ahmet Davutoglu’s Gelecek.

Neither of these parties are likely to garner 7% individually and therefore would need to run on the bigger opposition parties’ lists. This presents a dilemma. Their pious supporters would balk at voting for any candidate running with the secular CHP but may be less leery of backing their candidate if they were on the Iyi ticket. Either way, the changes will complicate matters for the opposition, if only because they will add a further layer of horse trading to an already fragile balance.

The lowering of the threshold will benefit the AKP’s informal coalition partner, the Nationalist Movement Party (MHP). Its declining electoral fortunes mirror those of the AKP, hit by a sharp economic downturn that is set to deepen as a result of Russia’s war on Ukraine.

Recent opinion polls consistently show the People’s Alliance running neck and neck with the opposition Nation Alliance, with some suggesting that the latter is leading the incumbents by an 18-point margin.

Respected pollster Ozer Sencar noted via Twitter that the changes could work against the MHP as well, if it's forced to field candidates under the AKP’s banner.

None of this affects the presidential contest, which will be held concurrently with parliamentary elections no later than 2023. And with power concentrated in the president’s hands, an opposition victory in the parliament would make life less comfortable but not impossible for President Recep Tayyip Erdogan if he retains his seat. His reelection depends on whether the opposition can agree on a candidate capable of beating the second longest reigning leader in modern Turkey’s history, the biggest challenge of all.