The higher-than-expected vote share of the ultra-nationalists in Turkey's recent elections surprised many, but in hindsight and upon closer examination, its causes are not so puzzling. 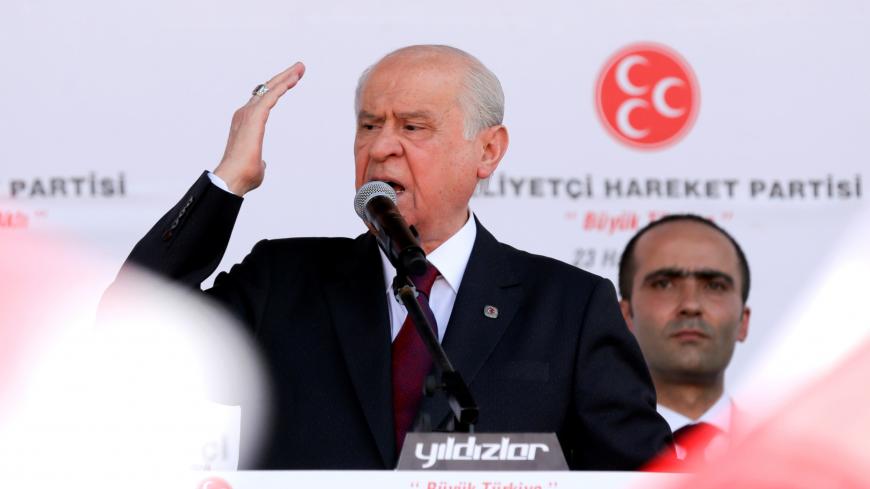 The most unexpected result from Turkey's June 24 elections was the Nationalist Movement Party (MHP) winning 11.1% of the vote. The MHP had formed a coalition with the ruling Justice and Development Party (AKP), because all the polls predicted that the MHP could not reach the 10% threshold to enter parliament. Competition from the new Good Party (IYI), an MHP offshoot, was thought to be the cause.

The IYI entered into an alliance with the main opposition Republican People's Party (CHP) for the same basic reason. The IYI indeed failed to surpass the vote threshold, with 9.96% of the vote, but it still made it into parliament through its coalition with the CHP. Thus, 20% of parliament's representation is ultra-nationalist. Considering that the AKP also counts former MHP members among its ranks, a seasoned AKP bureaucrat told Al-Monitor, “At least one in every four lawmakers in the new parliament has an ultranationalist background.” All told, 65% of the seats belong to right-wing parties.

Implementation of Turkey's new electoral system also means that the losing presidential candidates do not have seats in parliament. Hence, unless they pursue alternatives, none of the victorious Recep Tayyip Erdogan’s most outspoken opponents will have an official role in politics. “Without a party title, they will hold no weight in Ankara,” said the AKP bureaucrat. “Out of sight, out of mind.”

Yet MHP leader Devlet Bahceli remains in parliament and is likely to continue as Erdogan’s main ally in enacting legislation. Bahceli’s unwavering alliance with Erdogan since the botched coup in July 2016 was one reason some assumed the MHP would soon be absorbed by the AKP. So, how and why did the MHP retain its vote share? How and why did ultra-nationalist vote share overall increase two-fold? Preliminary analysis of the election data suggests three crucial reasons.

First is the interacting vote share of the MHP and AKP. The MHP's Bahceli endorsed Erdogan for president and never rigorously campaigned for his own party, holding only three rallies. In the final days of the campaign, however, Bahceli criticized the AKP’s parliamentary candidates for trying to siphon off his party's voters. While observers discussed cracks in the AKP-MHP coalition, Erdogan remained calm and said AKP candidates should focus on attracting votes from parties outside their coalition.

Two days before the election, Hilal Kaplan, a prominent columnist for the pro-AKP Daily Sabah, predicted that the AKP would lose its parliamentary majority. She added that with the MHP’s possible 5% of the vote, however, the coalition would emerge the majority. She was quite accurate. The AKP's 42% of the vote and the MHP's 11% provide a safe majority of 53%. In several locations, as the IYI took votes from the MHP, disgruntled AKP voters voted for the MHP.

The Sabah columnist Dilek Gungor made an interesting observation concerning how the MHP increased its vote share, given that it didn’t run a full-fledged campaign. “For those who ask this question, I think they do not know the MHP,” Gungor wrote. “The MHP is a party of [political] cadres, rather than a leader.” She added that the IYI failed in providing most ultra-nationalists with an alternative. She finished with an ambiguous yet potent statement: “Neither the MHP’s voters nor the mindset of the state could allow the party to disappear with 3-5% vote share. This is what happened.”

Second is the impact of domestic population shifts. One curious finding was that the MHP gained votes in majority Kurdish areas, that is, the east and southeast, while losing votes in its traditional strongholds. Although a simple statement of fact, it is not the full story.

When compared to vote distribution in the 2015 elections from the southeast and from the east, the MHP’s share remained pretty much the same in 2018. That said, the IYI, on the ballot for the first time in 2018, managed to acquire more votes than the MHP in a few cities in these areas, including in Diyarbakir, the largest predominantly Kurdish city. Kemal Can, a journalist specializing in right-wing politics, told Al-Monitor, “Although there is a rise in [national] vote share [in majority-Kurdish areas] overall, that barely adds up to explain the 11%.”

In these areas, the increased number of soldiers, security and government personnel and their families are also part of the reason for the MHP’s higher vote share. Of particular note, the municipalities where the MHP vote share increased had lost their elected officials, from pro-Kurdish parties, in machinations orchestrated by the AKP government. The officials were replaced with state-appointed “trustees.” These new local governors apparently convinced their employees and extended family members to vote for the MHP in exchange for job security.

In addition, voters and campaigners for the Peoples' Democratic Party (HDP) faced intimidation and had difficulty reaching the ballot box, many of which were moved due to security reasons to distant destinations. Plus, during the summer months, Kurdish youths travel to others parts of the country as seasonal laborers, meaning more disenfranchised potential HDP voters and increased percentage shares for the ultra-nationalist vote.

The third, and the most crucial, reason for the ultra-nationalists' showing is the increase in xenophobic and strident, nationalist rhetoric since the collapse of the Kurdish peace process in 2015 and the rise of anti-Syrian sentiment. This helped both the MHP and IYI. The state of emergency, in its 22nd month, has heightened concerns about terrorism, encouraged constant cheering of militarist and Turkish historical sagas through television epics, and driven state-led jubilation over attacks against Kurdish towns in northern Syria and the promise of returning Syrian refugees to their country. All of this has super-charged nationalist sentiments and strengthened identity politics, transforming the latter into an important determinant of voter behavior. Several pundits assumed the AKP-MHP coalition meant the end of the smaller party, ultra-nationalist sentiment is instead on the rise in Turkey.

Making predictions for near-term Turkish politics is tricky. This election not only brings a new balance of power to the parliament, but also introduces a new governing system. From April 2016 until the June elections, Turkey had been governed by a transitional system, but it has now entered uncharted waters, with a full-fledged executive presidency and no prime minister. The powers of the parliament have been significantly curtailed.

The most optimistic analysts cite scenarios for the parliament sustaining some autonomy, the most important being the president having to work with it since his party does not have a majority. This seems rational, but in practical terms, parliament and the Cabinet are now irrelevant, because the president can issue decrees alone. Cabinet nominees and senior political appointments in the bureaucracy do not require parliament's approval.

Even though the AKP has to form a coalition with the MHP to exercise a parliamentary majority, Ankara bureaucrats of the AKP and MHP persuasion do not seem worried. Their message has been, in essence: “Indeed, this alliance has been in effect for a while now. There will be a few shuffles here and there, but overall the ideology and backbone of this alliance is in sync and not likely to be the cause of instability.”

This does not, however, guarantee the stability of the executive president model. The new system remains under construction; the number of vice presidents has not even been determined. Yet the current distribution of the new parliament shows that ultra-nationalist ideas will have a strong impact on presidential decisions.