Turkey's ultra-nationalists are evoking the violence of the past when rallying against the government's peace process with the Kurdistan Workers Party, writes Semih Idiz. 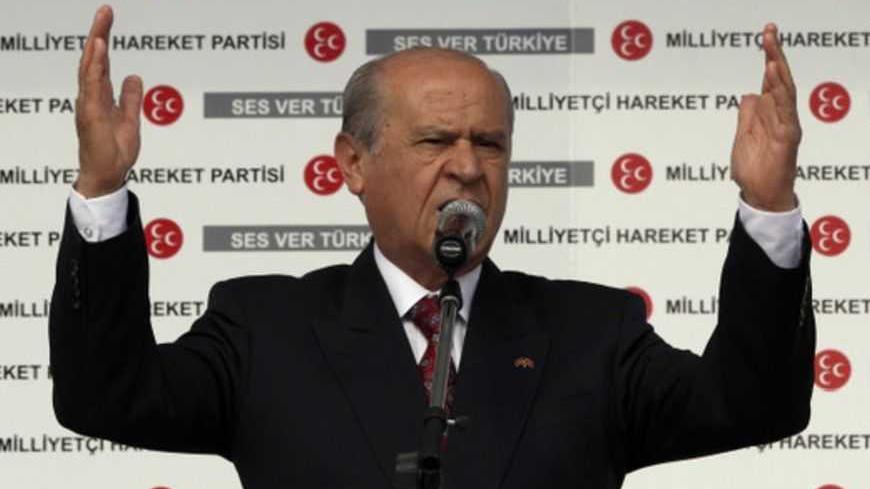 Turkey’s beleaguered ultra-nationalists, who are vehemently opposed to the peace process initiated by Prime Minister Recep Tayyip Erdogan with the outlawed Kurdistan Workers Party (PKK), have started baring their teeth once again with a promise of violence aimed at preventing what they consider to be “treachery against the Turkish nation.”

Addressing a rally of supporters in Bursa on March 23, Devlet Bahçeli, the leader of the Nationalist Movement Party (MHP), was met with chants of “Tell us to strike and we will strike! Tell us to die and we will die!”  While such bloodcurdling chants are not uncommon at Turkish ultra-nationalist rallies, it was Bahçeli’s response that caused the uproar in Turkey. “Don’t worry, the time will come for that, too,” Bahçeli bellowed back at the crowd, sending shivers down the spines of those who remember the bad old days before 1980.

That was a time when the group associated with the MHP called “Ülkücüler” (“The Idealists”), who are also known widely as the “Grey Wolves,” were implicated in many murders against their opponents, who at the time were predominantly left-wing and liberal activists and intellectuals.

Mehmet Ali Ağca, who murdered Abdi Ipekçi, the liberal editor of daily Milliyet, in February 1979, and gained international notoriety after he tried to kill Pope John Paul II in May 1981, was also a member of the group. The military coup on Sept. 12, 1980, ended violence by this group to a great extent, as it did with violence by armed ultra-left wing groups.

Bahçeli, who took over the MHP in July 1997, following the death of its legendary leader Alparsalan Türkeş, had in fact been trying to change the image of the party into a more peaceful one free of the gun. The general outlook of MHP members nevertheless remains ultra-nationalistic, and its natural enemies still include left wingers, pro-Western liberals, Kurds, Armenians and Greeks.

Not surprisingly, the party is also against Turkey’s EU membership prospects, but in an effort not to appear a spoiler in terms of a drive that has been ongoing for nearly half a century, it has formulated a stance where is says it supports this membership as long as it is provided in an “honorable” manner. What this means is that EU membership must not water down the “Turkish” character of the state through criteria having to do with human rights and advanced democracy, which would also increase the rights of minorities. Bahçeli and his party, nevertheless, face a serious problem today.

The MHP and its supporters may be in near-panic over the process with the PKK, as well as the various openings initiated by the ruling Justice and Development Party (AKP) for the Kurds and other minorities. But they face a prime minister in Erdogan who brought three successive election victories for the AKP.

Put another way, Bahçeli and the MHP are confronted with a party that garnered nearly one out of every two votes cast in the June 2011 general elections, while the MHP barely managed to get 13 percent of the vote, which is only three points above the nationwide electoral barrier that parties have to pass to enter Parliament.

What compounds the dilemma for Bahçeli and the MHP is the fact that it cannot point to the AKP as a party that is “fed from the outside by Turkey’s enemies” — its classic argument against leftists and pro-Western liberals. Instead, it faces an AKP whose grassroots strength comes from the support of the conservative and religious masses in Anatolia, where it has achieved much deeper political penetration among ordinary people than the MHP can ever hope to.

Analysts worry that the MHP’s helplessness in trying to prevent developments that Turkish ultra-nationalists vehemently oppose may prompt its supporters to resort to right-wing terrorism — to achieve by means of violence what is not possible to achieve politically through democratic channels.

The MHP’s grassroots support may not be very much when compared to the AKP, or even the main opposition Republican People’s Party (CHP), which got 26 percent of the vote in June 2011. But experience has shown that maverick elements associated with the party can cause serious problems for Turkey.

Neither do these elements have to be officially registered members of the MHP, or of the “Idealists,” in order to openly sympathize with their cause. A case in point is Ogün Samast, the young killer of the Armenian journalist Hrant Dink, and those who egged him on to commit this murder in Istanbul in January 2007.

The leaking to the media of a photograph of Samast, within hours of his arrests, holding a Turkish flag while flanked by two admiring policemen, also showed the kind of penetration ultra-nationalists have within the state apparatus. As matters stand the Dink murder case has turned into a sham as a result of these elements that have also penetrated the judiciary.

Erdogan and AKP officials were of course quick to respond angrily to Bahçeli’s chilling Bursa remarks, which they generally termed “dangerous” and “irresponsible.” “There is no striking or killing in our book,” Erdogan said later, adding “We have come to give life,” and going on to castigate the MHP leader.

Others worried that there could be those who consider Bahçeli’s remarks as some kind of a signal to go ahead and attack people considered to be the internal enemies of Turkey. Cengiz Çandar, a prominent Turkish journalist and contributor to Al Monitor, is one of those expressing such concerns.

“Bahçeli has presented ‘striking and killing,’ in other words the aim of stopping the process (with the PKK), as a project that can be brought to life on his instructions ‘when the time comes.’ This brings up the threat of bloody inter-communal conflict in Turkey,” Çandar wrote in his column in daily Radikal.

The general consensus outside MHP circles is that Bahçeli is playing with fire, especially given the number of unemployed Turkish youths of the Ogün Samast mold, who are impressionable and looking for a mission to give meaning to their otherwise drab lives.

Bahçeli however remains defiant in the face of harsh criticism. He told his Parliamentary Group earlier this week that he used those words during the Bursa meeting “with determination,” and went on to remark:

“Today I stand behind my words till the very end. Everyone should know that when the place and the time come it will definitely be seen and fully understood what we will do, and what we are prepared to consider.”

Many see this as rabble-rousing and incitement to violence by an elected politician, and are worried because of the past history of the MHP and its supporters. But Bahçeli is faced with another dilemma here. Opinion polls indicate that wary as many may be about aspects of the current peace process with the PKK, there is still nearly 60 percent support for the government as it tries to end 30 years of terrorism by this group.

In many ways, Erdogan is at the stage that Tony Blair was in 1998 in relation to ending the terror campaign of the IRA. The bottom line is that most Turks want an end to PKK violence, and are prepared to give Erdogan and his government the necessary leeway for this.

Should Bahçeli and his party trigger right-wing terrorism at a time when efforts are continuing to achieve this, it could rebound on them politically, given that they have lots of anger but no answers to a very real problem. Whatever the case may turn out to be, one thing is certain. Bahçeli and the MHP are indeed playing with fire at a highly sensitive moment for Turkey.

Semih İdiz is a contributing writer for Al-Monitor’s Turkey Pulse. A journalist who has been covering diplomacy and foreign policy issues for major Turkish newspapers for 30 years, his opinion pieces can be followed in the English-language Hurriyet Daily News. He can also be read in Taraf.