The ‘gray wolf’ threat to Erdogan and the AKP

Prime Minister Erdogan’s fears about the ultranationalist MHP may come true in the upcoming elections. 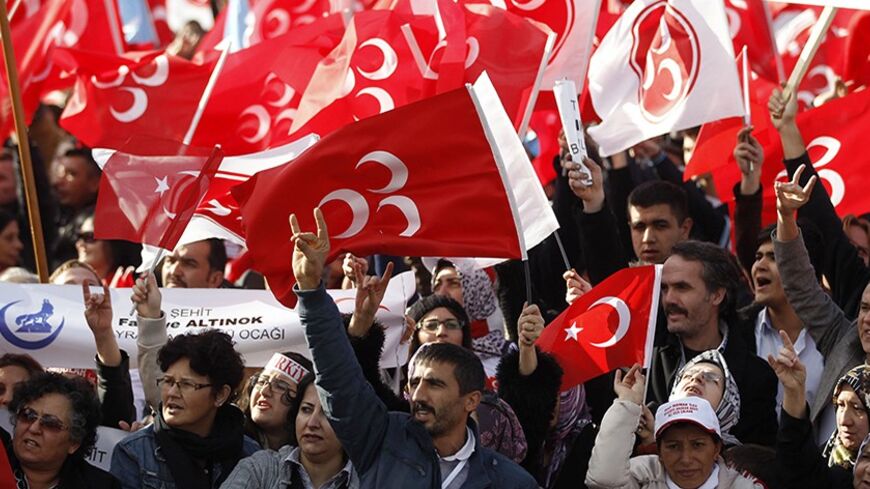 Supporters of the Nationalist Movement Party (MHP) make the gray wolf sign of the party as they wait for the arrival of party leader Devlet Bahceli during a rally in Istanbul, Oct. 5, 2013. - REUTERS/Osman Orsal

During the first weeks of the Gezi protests in June 2013, Turkish Prime Minister Recep Tayyip Erdogan organized five major “Respect the National Will” rallies. I was watching one of them with a group of “ultranationalist” friends. They belong to the Nationalist Movement Party, or MHP. Many of them had supported the Gezi protests. As we were watching Erdogan’s rally, all of a sudden Erdogan said, “I want to thank my brothers from the MHP.”

Cameras zoomed to a corner in the crowd, and MHP flags with three crescents on a red banner were raised. My friends ("gray wolves" as I joke with them; the term is used to symbolize militant Turkish ultranationalism) were in a state of shock to see MHP members in the crowd raise their flags and wave them for the cameras as Erdogan asked. In the next couple of weeks, we kept seeing MHP images, slogans and banners “supporting” Erdogan in the matter of the Gezi protests. Intriguingly MHP Chairman Devlet Bahceli echoed the comments of several other CHP members by saying, “No MHP members were at Erdogan’s rallies; these were staged events by the AKP (Justice and Development Party)." Erdogan’s reply to Bahceli was to say, “Would it be wrong if I called MHP members “my brothers”? Would it be wrong to call Saadet (Felicity) Party members my brothers?” (The Felicity Party is a small Islamist party that refused to be absorbed by the AKP).

In August 2013, I penned a piece for Al-Monitor explaining that Erdogan’s biggest fear is the "concerned" Islamists. Recent information released about recordings of Erdogan’s phone conversations with media bosses confirms my arguments. At this point, the MHP remains the only alternative political party on the right that “conservative” voters might shift to. All of Erdogan;s declarations indeed highlight his desperation to suppress opposition, and, oddly, the MHP’s voice in the public domain.

One of Al-Monitor’s Turkey Pulse columnists, Kadri Gursel, elaborates on various incidents where Erdogan called media moguls to stop the reporting of Bahceli’s speeches in parliament. In April 2013, Semih Idiz, another Al-Monitor columnist, rightly highlighted that the “MHP seems to be gathering more support at its anti-government rallies.” Despite the media’s tampering with poll results that don’t match their inclinations, it is highly possible that the MHP could increase its votes.

Political analyst and journalist Kemal Can, who has written books about nationalist movements in Turkey, emphasized a crucial point to Al-Monitor: “During the AKP’s struggle, first with Gezi, the loss of more liberal voices and now with the Gulen movement — hence the potential loss of 'Cemaat' votes — the AKP has to ensure that voters on the right do not swing to the MHP. This will be particularly troublesome as most of the pro-Gulen bureaucrats are being replaced by pro-MHP ones.” Erdogan is walking a tightrope. He has to please the general public to ensure that the “peace process” continues, while not giving so many concessions to the Kurds that he alienates the "ultranationalists."

There are a couple of issues to clarify about the MHP. For example, quite a few commentators are quite concerned about the term “ultranationalist.” They frequently correct me when I use words such as ulkucu and milliyetci in Turkish. They argue that they can be better expressed in English as patriotic and nationalist, rather than with a term that evokes the idea of fascism. When many think of the MHP, they think of nothing more than militant "gray wolves." The "gray wolves" were the ones who fought the “left” in the 1980s. Hence, "gray wolves" do not really have a good reputation. “But they were also the ones who went to fight the PKK without hesitation,” a former soldier told Al-Monitor. “Do you consider the MHP to be on the same xenophobic level as Greece's Chrysi Avgi (Golden Dawn) or Le Pen of France (National Front)?” asked another veteran. He added that today even Alevi communities (known to be leftist) opt for the MHP in certain cities. A dear friend, a scholar and also a veteran who lost his arm in the late 1990s fighting the Kurdish Workers Party (PKK) — considered a terrorist organization by Turkish government — told me, “There is a difference between hating foreigners and defending your own nation." This becomes a crucial point as Erdogan makes regular references to "gray wolves" in his speeches, particularly when it comes to protecting the Turkish-Syrian border.

Can said MHP Chairman Bahceli's level-headed, low-key manner is actually an advantage at times like this for the country as a counterbalance against the aggressive mood of the AKP and agitated MHP youth. Another scholar who studies the Kurdish question, speaking not for attribution, told Al-Monitor that it was remarkable that the MHP has not been pulled into any prolonged fighting despite all the friction throughout the peace process with the PKK. The MHP’s core perhaps remains the same with a Turkish-Islamic synthesis, but its image is certainly changing to be a more diverse, inclusive party, moving from far right to closer to the average voter.

Mehmet Tolga Akalin, a lawyer and the youngest MHP representative serving on a city council, has spoken against Bahceli and is no longer officially a part of the party. However, as we communicated, I was pleased to see his deep affection for the ideals that the MHP stands for and its desire for a better country. Akalin told Al-Monitor, “The MHP will not only increase its vote share, but will directly take those votes from the AKP’s base.” While Erdogan sees the left as weak and divided, and not a possible alternative to the AKP’s leadership in Turkey, he well knows that the AKP and the MHP share a common conservative base.

Sinan Ogan, a young yet outspoken parliamentarian from the MHP who has a Ph.D. in international relations from the University of Moscow, is an excellent example of the evolving of image of the MHP. Well-versed, hard-working and strongly integrated into the social media, Ogan is an active yet quite gentle politician. He stands out as a pleasant exception, especially on Twitter, where it has become commonplace to see threats and slang from parliamentarians and bureaucrats alike. Ogan told Al-Monitor that there may be significant surprises from the MHP in the upcoming municipal elections because the MHP started working diligently earlier than many other parties. Ogan said Erdogan’s concerns about the MHP are real, noting that nine recent MHP rallies have had high attendance. In Ogan’s words, “The alternative right-wing choice of the Turkish electorate is the 'right' again.” I concur.

The MHP’s social media campaigns also compare the extravagant character of Erdogan with the more down-to-earth, one-of-our-kind Bahceli. With the hashtag #MHPyeOyVerin AKPyeYolVerin (‘Vote for MHP, Let go of AKP,’ which rhymes in Turkish) one Twitter user posted photos of Erdogan and Bahceli praying.

Beyond images, there are a couple of other factors that will strengthen the MHP not only in municipal but also in general elections. First, since Gezi, the AKP has lost quite a bit of steam. Erdogan’s constant presence in the media and AKP members’ rather aggressive stance, with repeated angry outbursts, is not helping. The Gezi protests, graft probes and intensified fighting with the Gulen movement are expected to have consequences in the elections. Conservative Turks and Islamists do not have another option but to vote for the MHP. There is no Salafi movement in mainstream Turkish politics yet. Many of the pious Muslims are now skeptical about the AKP’s methods of acquiring wealth. Also, the AKP has failed utterly in foreign policy. The pride of neo-Ottomans has been quite shaken, especially in regard to Syria. The MHP provides an alternative for that as well. Last, despite all calls from the AKP, the Gulen movement has declined to form a political party; instead, it is expected to support the strongest possible candidate against AKP.

Thus, many of the undecided voters from the right-wing ideology may swing toward a MHP that has broken out of its 1970s image of ultranationalism. Last summer, when an 18-year-old Istanbul cab driver told me, “The MHP is the only answer to the AKP, which refers to our martyred conscripts as 'a few bodies.'” I had not taken him seriously. Now, however, there are too many signs to ignore his statement.