Why Erdogan must expand his ultranationalist alliances

President Recep Tayyip Erdogan’s growing dependency on Gray Wolves may mean more trouble for the Kurds and political dissidents in Europe, while increasing risks for Syrian refugees inside Turkey. 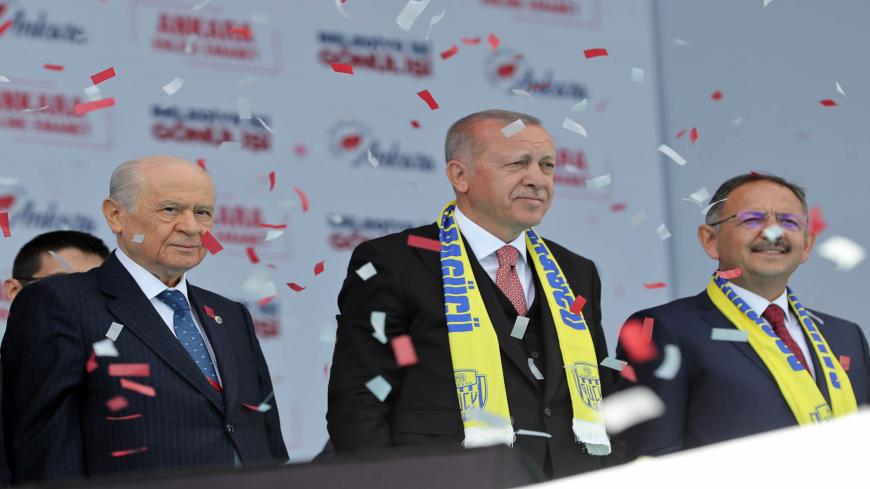 Turkish President and leader of the ruling Justice and Development party Recep Tayyip Erdogan (C) and leader of the Nationalist Movement Party Devlet Bahceli stand on stage during a joint election rally of the People's Alliance for the upcoming local elections in Ankara, Turkey, March 23, 2019. - Turkish will cast their ballots for local elections on March 31, 2019. - ADEM ALTAN/AFP via Getty Images

Nationalist Movement Party (MHP) leader Devlet Bahceli extended in early August an invitation to his archrival Meral Aksener, chairwoman of the Good Party, “to come back home.” President Recep Tayyip Erdogan, who has been in an unofficial coalition with the MHP for the last four years, publicly supported Bahceli’s invitation as "reasonable.”

Erdogan said that for a “party we view as native and national, it would not be appropriate to walk hand in hand with terror organizations.”

These statements are puzzling. The Good Party is an offshoot of the MHP, established in October 2017, in part due to personal rivalries between Bahceli and Aksener. Their cadres share similar ideological roots as ultranationalists, many of whom are referred to as Gray Wolves, or Idealist Hearths (Ulku Ocaklari). Despite their similar roots, opposition to Erdogan and Islamism also factored into the split.

“Bahceli and Aksener did not even exchange proper Eid [al-Adha] greetings [July 30-Aug. 3]. These two have lampooned each other at every instance for years. The sudden invite is due to Erdogan. Bahceli’s health is deteriorating. His party is losing support. Erdogan would like to sustain Gray Wolves' support after Bahceli is gone,” said a senior bureaucrat from the ruling Justice and Development Party (AKP) on condition of anonymity.

Informal alliances became a signature method of Erdogan administrations. Once the alliance collapses, all wrongs can be blamed on the coalition partner. Aykan Erdemir, senior director of the Turkey Program at the Foundation for Defense of Democracies, told Al-Monitor, “Erdogan’s ongoing alliance with the ultranationalists is a result of his falling out with other tactical allies over the last decade. In 2013, Erdogan parted ways with the liberals during June’s Gezi Park protests and the Gulen movement following the December graft probe into the dealings of his ministers and family members. In 2014, Erdogan abandoned the Kurds once he realized that he would not be able to get their support for his presidency. As Erdogan exhausted all the options for securing a majority with the help of tactical allies, Turkey’s ultranationalists took advantage of a vulnerable Erdogan to extract a wide range of policy concessions and spoils from him.”

Turkey’s Islamists depend on Gray Wolves both inside and outside Turkey. When Bahceli’s invite made the headlines most observers thought the Good Party would boost the AKP-MHP alliance, especially in case of an early election. Kemal Ozkiraz, director of Eurasia Public Opinion Research Center, told Al-Monitor, “I do not think the Good Party will join in the coalition. And if they do, they cannot take most of their voters with them.”

Prominent political analyst and writer Levent Gultekin concurred with Ozkiraz that the reason for a possible expansion is not to increase Erdogan’s vote share. Gultekin said, “Erdogan hopes to expand his sphere of influence with not only ultranationalists, but also nationalists and Eurasianists, and exclude left-leaning Republican People’s Party and pro-Kurdish People’s Democracy Party.” Gultekin explained that this coalition would not just be reflecting the interests of Gray Wolves but also those of Islamists, hence can be rebranded as “patriotic.” This rebranding would then help all parties within the coalition to justify their compromises as a “sacrifice for the national interest.”

Although Gultekin does not predict the Good Party will join the government, he foresees that Erdogan yearns for such a reunion to help sustain his regime. “Using the foreign enemies' excuse — for example. the current eastern Mediterranean crisis — gives Erdogan a good rhetoric to attract other right-wing parties to join him.”

Gray Wolves serve different purposes in aiding the Turkish government abroad. Yektan Turkyilmaz, a research fellow at the Forum Transregionale Studien in Berlin, told Al-Monitor, “In Europe, we see these alliances mirrored clearly. Until 2000, the Turkish government was acting like the big brother to Turkish groups in Europe to protect their rights. Since the AKP came to power, gradually we observe that different official and unofficial channels are used to mobilize the Turkish immigrants in Europe to defend Turkish national interests. Turkey has become a state actor.” Turkyilmaz explained different marginal groups — such as AKP-linked biker gangs, Osmanen Germania, Turkey-sponsored Muslim Brotherhood mosques and networks in Europe, along with Turkish embassies, consulates as well as the National Intelligence Agency — have all become one and the same in their service for Erdogan and the Turkish government.

Turkyilmaz highlighted that these groups target Kurdish nongovernmental organizations, any former members of the Gulen movement as well as political dissidents who seek refuge in Europe. They also reward Turkish immigrants to spy on their fellow citizens in Europe. In a way, Gray Wolves have become the guardians of Erdogan’s Muslim Brotherhood activities in Europe, making it all the more difficult to exercise freedom of speech even in Europe. Although the nationalist ideology of these groups in some ways contradicts the AKP's Islamist leanings, they do the AKP's bidding in Europe in exchange for various pay offs for their leaders.

Erdemir added, “On the policy front, this alliance has resulted in a tradeoff for both sides. While Erdogan had to agree to a brutal repression of Turkey’s Kurdish citizens, the ultranationalists have silenced their criticism of Erdogan’s Syrian refugee policy [domestically]. Overall, the AKP-MHP alliance has created a toxic mix, bringing out the worst features of Islamists and ultranationalists.”

Levent Koker, professor emeritus of public law elaborated on the impact of the 2011 Syrian civil war on Turkish-Islamists synthesis. The situation in Rojava — the Kurdish name for northeast Syria that is controlled by the Syrian Democratic Forces — was a national threat pushing Erdogan closer to an ultranationalist union. He told Al-Monitor, “What we refer to as ultranationalism today is, in fact, a synthesis of Islamism and Turkism as a form of Turkish nationalism, and Erdogan has never been in a difficult position to defend such a stance in a world where democracy is in decline. In short, Turkey as a country has been experiencing deep-seated identity and legitimation problems under Erdogan’s leadership. It has been proved once more that it failed to solve these problems and took yet another authoritarian turn and opted for government by coercion, instead of government by consent. Erdogan — a representative of the opportunism of the Turkish political right — regards an alliance with ultranationalism as conducive to his position in power.”

Although Aksener has shown no interest in joining the AKP-MHP coalition, AKP insiders are hopeful. There is more to be negotiated. Aksener repeatedly said her party is ready to do whatever it takes for a switch to a “fortified parliamentary system.”

If the Good Party joins the coalition, the issue of animosity towards refugees, whose flames have been fed by the Good Party’s top echelons only to be simultaneously curbed by the AKP, will be rekindled. “Except for being critical of ossified economy, Aksener’s party platform relies on ever-growing anti-Syrian sentiments,” said the AKP bureaucrat. When the number of ultranationalists in the coalition increases, so will the strength of their demands and voices within the alliance. Erdogan will have two options: either to find new allies or allow his Muslim Brotherhood ideology to get tainted one more time.