As Turkey's ruling party and its nationalist ally face a deeper legitimacy crisis, pressure on Kurdish politics is intensifying. 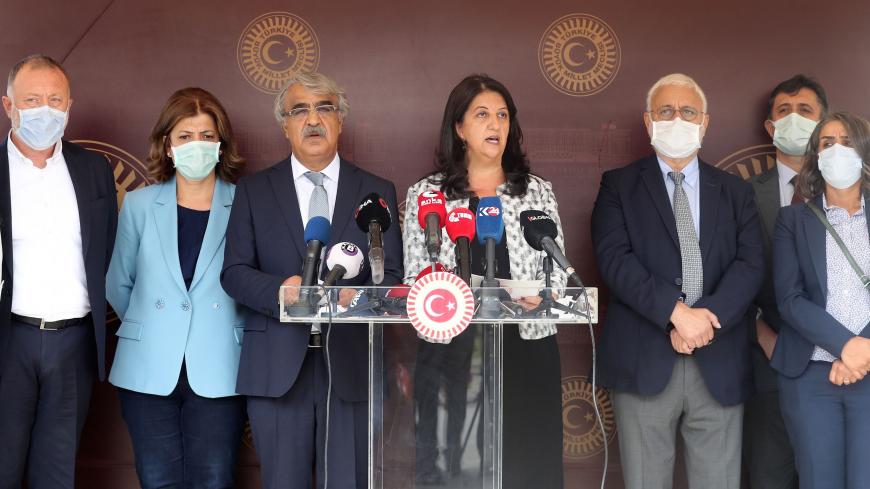 Co-chairpersons of the pro-Kurdish Peoples' Democratic Party (HDP) Pervin Buldan (C-R) and Mithat Sancar (C-L) hold a press conference with their parliament members as they boycott the first session of the Grand National Assembly's 27th term following the arrest of 82 people, including members of their party, outside the parliament building in Ankara on Oct. 1, 2020. - ADEM ALTAN/AFP via Getty Images

Picture this: You're watching the evening news and you see a political party emblem — in this case, the pro-Kurdish People’s Democratic Party (HDP) emblem — on which, in place of leaves and stars, are images of hand grenades and bullets. On top of that is a red seal on the logo, as if the party is already banned from politics. This was the image presented multiple times on pro-government television channel ATV and several social media accounts despite the HDP’s official complaints.

The television channel was simply following calls from Devlet Bahceli, leader of the Nationalist Movement Party (MHP). The MHP is Turkish President Recep Tayyip Erdogan’s ally in government. It is the party of the ultra-nationalist movement known as the Gray Wolves.

The Gray Wolves advocate for a militant approach against the Kurdistan Workers Party (PKK). Both Bahceli and senior members of the MHP target the HDP and its electorate. Even before the coalition between the MHP and the Justice and Development Party (AKP) was formed, Bahceli provoked Erdogan over his approach to the HDP and the Kurdish issue.

This time, Bahceli’s demand to ban the HDP was echoed by other MHP elites in a dehumanizing manner against Kurds. For example, MHP deputy chairman Semih Yalcin posted a series of tweets in which he not only equated the HDP and the PKK as terrorist organizations but also referred to both in derogatory, dehumanizing terms. Different ultra-nationalist accounts spread these tweets far and wide and cheered Yalcin’s words.

Although tacitly pro-government media joined Bahceli in bashing the HDP, AKP spokesperson Numan Kurtulmus said party closures in Turkey have not had positive results historically. Emeritus professor of public law Levent Koker told Al-Monitor, “Some 26 political parties were closed by the Turkish Constitutional Court from 1962 to date. The parties banned by the court were either socialist (communist), Kurdish or Islamist.” This issue is frequently framed in the public sphere as a source of tension between Turkey's Islamists and ultra-nationalists, but why?

Koker provided a detailed account of how political attitudes toward Kurds evolved over time. By 2008, Communism and Islamism were no longer viewed as a threat. “In due course, a sort of compact between the AKP’s Islamist leanings and MHP-style Turkish nationalism came about, and now — perhaps after 2011 when Kurdish groups gained prominence in Rojava — Turkey came to see the Kurdish political movement represented in the parliament (the HDP) as the only serious threat to its nationalist foundations. This way of treating the HDP gained visibility, especially after the June 2015 elections.”

Most popular independent observers also rejoice at the idea of a possible AKP-MHP rift every time a disagreement becomes visible. A quick search for “cracks in AKP-MHP coalition” reveals these journalists repeating quite similar claims over the years about how the end of the AKP-MHP coalition is imminent. These analyses are based on wishful thinking and wrong assumptions. Rather, the public displays of AKP-MHP disagreements are an attempt to consolidate their own bases, as both parties’ vote shares in polls are on a steady decline.

Both parties are under increased scrutiny in Europe and fear their voter share will be impacted. They see an urgent need to revive their bases. The AKP can again attempt to reach out to pious Kurds. Huda-Par (an Islamist Kurdish Party) has mostly acted in support of the AKP. It is interesting to note that on Dec. 16, Erdogan met with Huda-Par chairman Ishak Saglam, signaling there are other ways to achieve Kurdish political representation.

Yektan Turkyilmaz, a research fellow at the Forum Transregionale Studien in Berlin, told Al-Monitor, “Whenever the Kurdish issues are provoked and Kurds dehumanized, this is always a signal of the internal crisis of the Turkish state. Whenever the going gets tough for the state, the easiest target is to attack Kurds repeatedly.”

Burak Bilgehan Ozpek, a professor of international relations at the TOBB University of Economics and Technology in Ankara, reminded Al-Monitor that after the June 2019 elections, Bahceli was upset with Kurdish voters for not obeying the wishes of captive PKK leader Abdullah Ocalan and instead listening to former HDP chairman Selahattin Demirtas, who is also in prison.

Prominent political analyst and respected author Levent Gultekin told Al-Monitor, “The HDP has become a double-edged sword. It has become a tool for the government to redesign the opposition, and between the AKP and the MHP a tool to reassess each other’s political standing.” Gultekin asks how the Kurdish issue can be resolved if political representation is not allowed.

So can the HDP be banned from politics? Yes, said Koker. Although it has become much more difficult after 2008, it is still possible to shut down a political party. However, in a peculiar way Bahceli has still not made an official request to back his feisty demands. Is the ban the most appropriate way for the AKP-MHP coalition to reach its goals? Not necessarily, as the goal of eliminating Kurdish political representation can be achieved more effectively by arresting and imprisoning HDP lawmakers and replacing HDP mayors with government appointees. The AKP-MHP coalition has preferred this method over blunt party bans for all opposition parties, for Kurdish politicians prosecuting them with terror allegations has worked smoothly so far. For big cities, where Turkey’s main opposition Republican People’s Party has won, the government gradually limits their authority. They will not be banned, but they will not be allowed to be influential players in the political game either.

For the HDP to be banned from politics, Bahceli must make an official request to the Supreme Court's chief public prosecutor (CPP). This request will become public along with evidence the CPP collects. If there is sufficient evidence, would not the government take this golden opportunity to eliminate the HDP? Would a CPP investigation generate harmful conclusions for government officials? Interior Minister Suleyman Soylu’s silence on the matter is an important cue as well. For now, the best Bahceli has is the redesigned image of the HDP logo, with bullets and hand grenades, to influence the public.

The AKP-MHP coalition has good reasons to publicize the idea of banning the HDP. First, HDP-bashing serves similar purposes as Israel-bashing: high returns on public excitement and a rally-around-the-flag effect. Anger politics helps curb hunger politics to some extent. Second, it helps the MHP and the AKP signal to their bases that they are different political entities, giving a bit of false hope to independent political pundits. As horrible as it sounds, most popular independent broadcasting in Turkey has also become quite populist to survive the repressive environment. They need funds that flourish on the hope that the end of Erdogan’s rule is imminent. Third, it justifies more political and military oppression of the Kurds by simply reframing even the survival of their political party as a gracious gift from Erdogan. In real terms, opposition parties — Kurdish or otherwise — have little to no political power in Turkey.