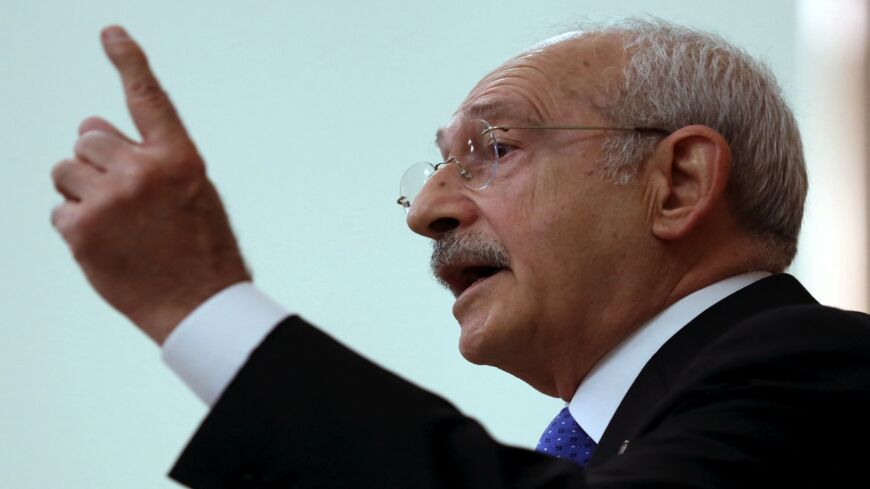 Leader of the Republican People's Party (CHP) Kemal Kilicdaroglu gestures as he speaks during his party's group meeting at the Turkish Grand National Assembly in Ankara on Oct. 5, 2021. - ADEM ALTAN/AFP via Getty Images

The leader of Turkey’s secular main opposition, Kemal Kilicdaroglu, delivered an Oct. 18 deadline over the weekend to members of Turkey’s sprawling bureaucracy. They needed to stop engaging in illegal, “mafialike” activities. If they ignored his calls, they would not be exonerated on the grounds that they were acting under orders from their superiors, Kilicdaroglu warned.

His admonishments, relayed in a video, prompted a furious response from Turkish President Recep Tayyip Erdogan. Kilicdaroglu’s references to the mafia and “the stench of sewage” rising from the corridors of power were an insult to the president, Erdogan’s lawyer Huseyin Aydin, charged in a criminal complaint with the Ankara Chief Prosecutor’s office Monday.

Kilicdaroglu frequently lashes out at Erdogan. And Erdogan has taken legal action against the leader of the Republican People’s Party (CHP) numerous times. It’s hardly unusual that an opposition leader would act as if the government is going to be voted out of power. The problem for Erdogan is that after nearly two decades at the helm, this time around it might actually prove true.

Opinion polls consistently show Erdogan and his ruling Justice and Development Party (AKP) losing ground, with many suggesting that Erdogan’s governing alliance with the Nationalist Movement Party (MHP) would lose to an opposition bloc of parties in parliamentary and presidential elections that are due to be held in 2023. Erdogan still scores higher than his own party, but with the economy going from bad to worse, he too might be defeated in a second round of balloting.

Most critically, asserted Ozer Sencar, the founder of Ankara-based MetroPOLL, public perceptions are also changing. According to MetroPOLL’s most recent survey, more people (49.8%) say they believe Erdogan would lose another presidential election than those who say he would win (44%).

The wall of fear assiduously erected by Erdogan appears to be crumbling.

ORC, a polling outfit that used to be favored by the AKP until it started delivering bad news, found in an October survey that only 11% of voters from Generation Z, or those who were born between 1997 and 2005, said they would vote for the AKP, while thrice as many said they would vote for the CHP. Never have circumstances been more opportune for Turkey’s perennially fractious opposition.

Indeed, the prevailing consensus among opposition parties is that the AKP’s days are done.

If they play their cards right, and if Erdogan doesn’t resort to some sort of drastic action — like postponing or stealing the elections or igniting a war — he and his party may have to bow out. Erdogan’s rivals should shake off their smugness, for it’s all still a big if.

Rumors about the state of Erdogan’s health, with predictions that illness would claim him long before the ballot box, have been making the rounds for years. He’s been treated for colon cancer, among other ailments. He displays difficulty walking, his footballers’ knees bowed at ever wider angles. He has trouble collecting his thoughts and nods off at public events. Yet, the 67-year-old set off for Africa today, his eighth foreign tour this year in the midst of the COVID-19 pandemic. “Even if he had to do it on a stretcher, Erdogan would campaign; he’s a street fighter,” said a seasoned Ankara insider in response to mounting speculation that Erdogan may throw in the towel.

Erdogan’s biggest advantage is the opposition itself. In a rare show of unity, the CHP banded together with the right-wing nationalist Iyi Party, the pro-Kurdish Peoples’ Democratic Party (HDP), and several smaller Islamist and liberal groups to topple a string of AKP mayors, most importantly in Ankara and Istanbul, in 2019. They are hoping to replicate this victory in 2023.  Behind the scenes, talks are underway, and the opposition bloc of parties could just pull it off in the parliamentary elections. But what about in the presidential race to be held concurrently?

Since 2018, power has been concentrated in the hands of the president with the shift from a parliamentary system to an executive presidential one. Hence, the key to meaningful change is defeating Erdogan. This in turn means the opposition will need to agree on a candidate capable of doing so. Prospects of this remain dim. This may explain some of MetroPOLL’s other findings, notably that up to 22% of eligible voters don’t know who they’d vote for. Nearly half, 46%, are collectively from the AKP and the MHP.

Sencar noted that there are several factors for their indecision. One is that they find the opposition inadequate. Another is that they fear retribution from the opposition should it gain power. Some 71% of AKP voters believe the opposition would revive the suppression of overt piety that prevailed during the eight decades of military tutelage that preceded the AKP’s rise to power. “Winning is hard, losing is easy,” noted Sencar.

Iyi Party leader Meral Aksener, who is among the candidates most likely to defeat Erdogan, ranking third behind Istanbul Mayor Ekrem Imamoglu and Ankara Mayor Mansur Yavas, has declared she is not going to run for president. She wants to be prime minister instead. This is in line with the opposition’s plans to revert to a parliamentary system once it gains power — far easier said than done.

Kilicdaroglu says he wants both CHP mayors to stay in their jobs. This is because if either were to quit in order to run, their respective municipal councils where AKP and MHP members outnumber the opposition would elect their own to replace them. However, it’s becoming increasingly clear that the real reason is Kilicdaroglu is preparing to run himself and is rumored to be unhappy about Imamoglu’s obvious ambition. One big worry aired by others in the party is that should Imamoglu become president he won’t give up the powers Erdogan has amassed.

A recent PR blitz in which “Uncle Kemal” cuts an avuncular figure who will steer the country back to normalcy is meant to inspire confidence.

Since taking over the CHP in 2010 in the wake of a sex scandal — his predecessor was captured on a widely circulated video in a bedroom in his underpants with his secretary — Kilicdaroglu has held the CHP’s vote steady at around 25%. Left-wing parties rarely do much better in Turkey — the CHP has been out of power since 1999.

Unlike Erdogan, the 72-year-old former bureaucrat’s image is graft-free. His gentle demeanor belies a doggedness few thought he possessed. He has managed to survive numerous attempts mounted from the party’s ultranationalist flank to unseat him.

Kilicdaroglu has a good shot at getting the pro-HDP Kurds behind him. He is thought to carry some Kurdish blood. His wife, whose quiet modesty is in stark contrast with first lady Emine Erdogan, speaks the main Kurdish dialect Kurmanji. Both are from the mainly Kurdish southeastern province of Tunceli. And both are Alevis. Herein lies a big rub. The Alevis practice a unique variant of Islam that venerates the Prophet Ali and is open-minded and deeply spiritual. They revere nature and animals and are passionate about poetry and music. For many hardcore Sunnis, the Alevis are heretics. The ugly reality is that Turkey’s conservative nationalist majority is far more likely to vote for a Sunni Kurd than an Alevi one.

The bias has been cynically exploited by Erdogan. He has openly targeted Kilicdaroglu over his faith and will surely do so again in what is expected to be a polarizing campaign. The other big hitch is that opinion polls consistently indicate that Kilicdaroglu cannot beat Erdogan and ranks sixth in popularity overall, according to MetropPOLL.

In the meantime, the pro-AKP media is gleefully playing up the differences between Kilicdaroglu and Imamoglu, who is Sunni and, like Erdogan, from the Black Sea. He can therefore lure Black Sea AKP voters. The Istanbul elections proved that the Kurds will rally behind Imamoglu if that’s what their leaders instruct them to do. Yavas, who is a Turkish nationalist, holds little appeal for most Kurds.

The fact remains that the 51-year-old former businessman is the first politician to have ever defeated Erdogan; Imamoglu has done so twice so far, first in the March 2019 municipal election and by an even bigger margin in the June 2019 redo. Can Kilicdaroglu rise to the moment and allow him to run? Will Erdogan yield to his worst instincts and hang on to power by any means? How can this be averted? These are among the countless questions the opposition needs to ponder rather than talk about punishing the very same voters it's hoping to draw.