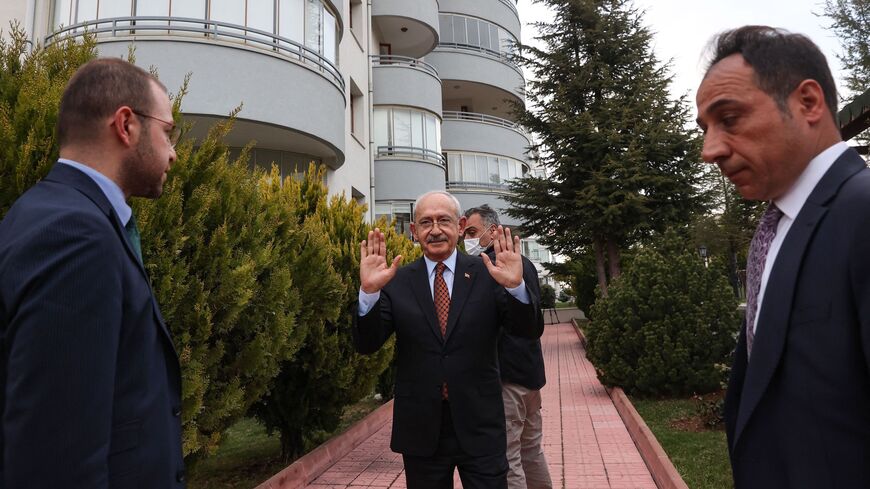 Kemal Kilicdaroglu, chair of the Republican People's Party, arrives at his home after a power outage in Ankara, Turkey, on April 21, 2022. - ADEM ALTAN/AFP via Getty Images

ISTANBUL — The lights were back on in Turkish opposition leader Kemal Kilicdaroglu’s Ankara home on Thursday after a week without electricity in protest at surging energy prices.

The end of his protest — he had refused to pay his electricity bill since February — coincided with Kilicdaroglu emerging as the most likely candidate to face President Recep Tayyip Erdogan in an election scheduled for June 2023.

As leader of the Republican People’s Party (CHP), Turkey's largest opposition party, Kilicdaroglu is the de facto head of the Nation Alliance, a electoral coalition of four opposition parties that formed for the 2018 elections.

In recent months, he has said he would be “honored” to be the alliance’s presidential candidate but refrained from indicating whether he would run.

Speaking on Tuesday, the day after philanthropist Osman Kavala was jailed for life in a case viewed as deeply unjust by many, Kilicdaroglu called on supporters to “join me or get out of my way right now.”

His rousing speech was interpreted by unnamed CHP insiders speaking to local media as a declaration of his candidacy. The Cumhuriyet newspaper, which has ties to the CHP, reported that other opposition party leaders backed the move.

Since their victories, Yavas and Imamoglu have adopted wide-ranging policies to improve public services and root out corruption and mismanagement.

Before he turned to politics, Kilicdaroglu was a civil servant who rose to head the social insurance agency. He has often been characterized by his bureaucratic background and criticized for not connecting with ordinary voters.

Critics have also pointed to his record since taking over leadership of the CHP in 2010, during which the party has failed to gain more than 26% of the vote in four parliamentary elections.

“It’s only natural that Kilicdaroglu becomes the candidate of the opposition because he’s the president of the largest party in the Nation Alliance. He’s the leader of the main opposition party,” said Ozgur Unluhisarcikli, director of the German Marshall Fund in Ankara. “Yes, he has a track record of losing elections against Erdogan but he also has a track record of experience.”

He added, “Because he’s a senior figure, his candidacy cannot easily be contested by other people in his party or even by the other parties in the alliance.”

Kilicdaroglu’s pivotal role in forming the Nation Alliance, which has coalesced into a group promising wide-ranging reforms and a return to Turkey’s parliamentary system, is also seen as an achievement that now presents a united front to Erdogan.

He was also instrumental in helping the newly formed Iyi Party, now the second largest party in the alliance, to compete in the 2018 election by lending 15 CHP deputies shortly after the party was formed in a break from the Nationalist Action Party (MHP). The MHP is allied to the AKP as the People’s Alliance.

A year earlier, Kilicdaroglu embraced a new form of Turkish politics when he set off on a 25-day Justice March from Ankara to Istanbul to protest the imprisonment of a CHP lawmaker.

The march by the party leader, then 68, attracted support from a wide spectrum of government opponents. Islamic State suspects were arrested for planning to bomb the demonstration.

One concern for CHP campaign planners will be Kilicdaroglu’s Alevi roots. Alevis, who largely adhere to Shiism mixed with Sufi beliefs, are Turkey’s largest religious minority and have historically been subject to prejudice and pogroms.

“First of all he’s an Alevi in a Sunni-majority country. That will certainly have a negative impact on his chances; we don’t know by how much,” said Unluhisarcikli.

Journalist Murat Yetkin said Kilicdaroglu’s background could provide an avenue of attack for the AKP, telling Al-Monitor, “As soon as Kilicdaroglu is announced as a candidate, [the CHP] are worried that him being Alevi could led to black propaganda under the table, or perhaps openly, from Erdogan and the AKP that will deter conservative voters, the vast majority of whom are Sunnis.”

However, as the leader of a centrist, social democratic party, attracting Turkey’s vast right could prove to be the main obstacle on Kilicdaroglu’s path to power.

“It’s doubtful whether he’s the best person in the alliance to gain support from right-wing voters, ideally including from the AKP and MHP as well,” said Unluhisarcikli. “Other potential names that have been mentioned, first and foremost Mansur Yavas, would find it easier to attract AKP and MHP voters, as well as the votes from the right-wing parties in the Nation Alliance.”

This weakness could be countered by nominating opposition politicians from the right, such as Iyi leader Meral Aksener, for his cabinet if he wins, he added.