At a weekend summit, six party heads charted a path to ending the executive presidential system that critics say has eroded the country’s democratic institutions. 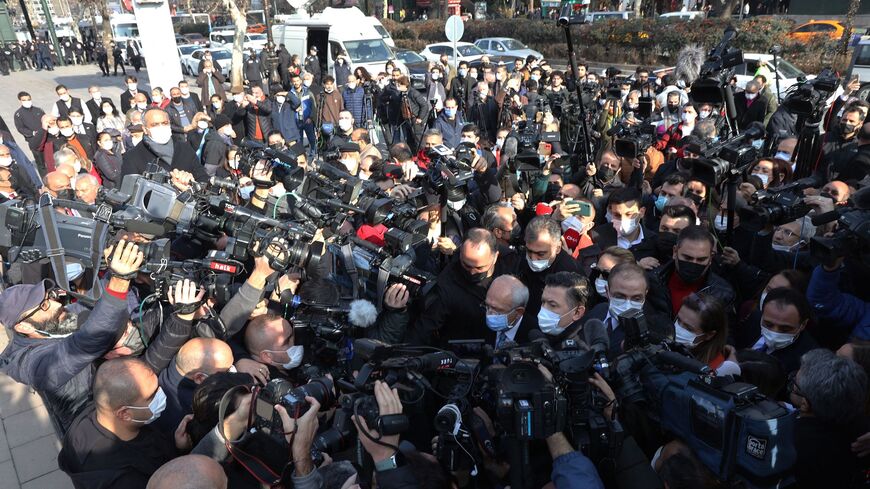 Republican People's Party chair Kemal Kemal Kilicdaroglu (C) speaks to the press outside the Ministry of Education in Ankara on Dec. 30, 2021. - ADEM ALTAN/AFP via Getty Images

ISTANBUL — Leaders of six Turkish opposition parties convened this past weekend in Ankara to chart a path back from the executive presidential system, which they say concentrates too much power in the hands of President Recep Tayyip Erdogan to the detriment of parliament, the courts and other democratic institutions.

The opposition argues that the presidential system — ushered in by a 2017 referendum and formally installed when Erdogan won the following year’s election — is at least partially to blame for many of Turkey’s current problems.

Saturday’s meeting saw the heads of four parties that form the Nation Alliance — the Republican People’s Party (CHP), the Iyi Party, the Saadet Party and the Democrat Party — joined by the founders of two parties that split from Erdogan’s Justice and Development Party (AKP).

Turkey’s third largest parliamentary party, the Peoples’ Democratic Party (HDP) was not present. Although it has cooperated with the opposition alliance — most clearly during local elections in 2019 — the HDP, which is rooted in the Kurdish movement, has not entered into a formal coalition with other parties.

Following the Ankara summit, the parties said they were “determined” to build a strong, transparent and impartial democratic system.

Highlighting the current situation as one of Turkey’s “deepest political and economic crises,” their statement added, “The most important reason for this crisis is undoubtedly the arbitrary and non-compliant administration” under the current system.

The presidential model introduced in 2018 saw Turkey swap its 95-year-old parliamentary system for one that allows Erdogan to rule by presidential decree. The presidency had previously been a largely ceremonial role, with the prime minister wielding executive power.

Critics say this one-man rule has largely nullified parliament, eroded judicial independence and made regulatory bodies the pawns of the executive.

The opposition leaders said they would reveal details of their plans on Feb. 28. “Today, we have taken an important step to build the ‘Turkey of Tomorrow’ on behalf of our nation,” they added.

The date of the public announcement is significant in recent Turkish history. It marks the 1997 “post-modern coup,” when a memorandum from the country’s generals led to the collapse of the government led by Necmettin Erbakan, an Islamist whose party was the forerunner to Erdogan’s AKP and the opposition Saadet Party.

The military also forced through a series of harsh secularist laws such as banning headscarves in public institutions, deeply alienating pious Turks.

Choosing this date could therefore indicate efforts to reach out to the religiously conservative voters who form the AKP’s base.

CHP leader Kemal Kilicdaroglu has been “doing his utmost to convey to conservative voters that the Feb. 28 era is over for good and those policies would not come back if the opposition comes to power,” said Berk Esen, an assistant professor of political science at Istanbul’s Sabanci University and IPC-Mercator fellow at the German Institute for International and Security Affairs

As well as outlining the path back to parliamentary oversight, the leaders are thought to have worked on a prospectus of their first steps should they oust Erdogan in elections scheduled for June 2023. They include plans for economic recovery, rooting out corruption, reviving the rule of law and restoring fundamental rights.

The meeting also indicates the two AKP splinter groups — the Gelecek Party and the Democracy and Progress Party — could join the four-party Nation Alliance for the elections.

One vital issue the alliance still has to address is who will stand against Erdogan. Currently, two CHP mayors are favored in the opinion polls — Istanbul’s Ekrem Imamoglu and Mansur Yavas of Ankara. Kilicdaroglu, whose party is Turkey’s second largest, is also said to be in contention.

Many see a Kilicdaroglu candidacy as a potential misstep by the opposition, as he failed to defeat Erdogan in any of the national elections during his 12 years as CHP leader.

“It’s quite clear he doesn’t have what it takes,” said Esen. “Neither the charisma, the popular appeal, the command on policy positions nor strong control over his party.”

Osman Sert, research director at the Ankara Institute, said continued mismanagement by the government would bolster the chances of any candidate, but added, “The identity of the common candidate is so important." He went on, “If the parties can come together and decide on a common road map, a common vision and a common program then the candidate will be much stronger because of the backing of all the parties.”

Sert warned that opposition politicians must maintain their momentum. “The people’s credit is not forever; it’s not unlimited,” he said. “They cannot talk, sit and meet forever. They must come to a common understanding on how they will go to the elections.”

If they are successful in winning and pushing through a strengthened parliamentary system, said Esen, “we’re going to look back to this period as a turning point in the history of Turkish democratization.”