President Recep Tayyip Erdogan won a strong mandate with more than 53% of the vote in an election that cements his legacy as Turkey’s most powerful leader in decades. But his main rival has refused to concede, saying it was too early to say Erdogan had won outright. 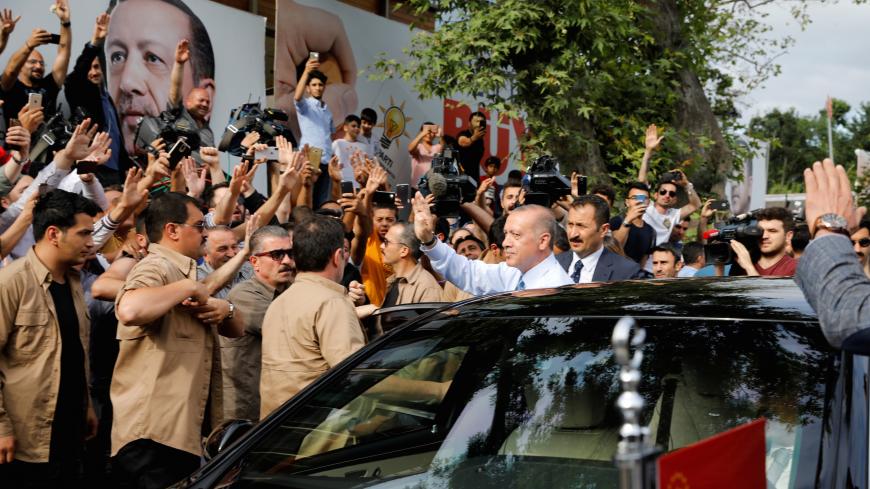 President Recep Tayyip Erdogan handily won re-election Sunday, cementing his hold on power with immense new authority, but his historic victory was tempered after his ruling party was deprived of a majority in a concurrent parliamentary vote and the opposition refusal to concede.

His main rival, Muharrem Ince, nominated by center-left Republican People’s Party (CHP), had not yet admitted defeat in the early hours of Monday. Other opposition parties also cried foul play over the integrity of the vote.

Erdogan, Turkey’s most popular if contentious politician, won 52.6% of the vote with 99% of ballot boxes counted, trailed by Ince, who drew record crowds during a spirited campaign but won just 30.7%, failing to force Erdogan into a second round, according to unofficial results reported by the state-run Anadolu Agency.

In uncharacteristically conciliatory remarks, Erdogan said Turkey had taught the world “a lesson in democracy."

“It is time to leave the tension and resentments experienced during the election period behind us and focus on the future,” he said in his first comments after polls showed he was on track to win.

The election ushers in a new era in Turkey, marking the end of a century-old parliamentary democracy and the transition to an executive presidential system, bestowing on Erdogan immense new powers he has long coveted.

Erdogan, a master campaigner who has ruled Turkey for 15 years, faced his most competitive election yet as opposition parties fielded five candidates who ran vigorous campaigns accusing him of seeking one-man rule and reckless management of the economy.

Taking to Twitter, Ince urged voters to wait until the High Electoral Board released official results and later said he would make a statement at noon local time Monday. Earlier, he accused Anadolu Agency of reporting votes from areas that favored Erdogan to undermine opposition morale.

The elections took place under emergency rule, which Erdogan imposed two years ago after a botched military coup. Tens of thousands of his opponents are in prison — including one presidential candidate — and dozens of media outlets have been shut, sparking claims from international observers that the campaigns were not free or fair.

The Turkish strongman won approval for his overhaul of Turkey’s system of governance by a slim majority in a constitutional referendum last year. This election formalizes a role that Erdogan had already reshaped as Turkey’s most powerful, even though his post was technically ceremonial, since he was first elected in 2014. He was prime minister between 2003 and 2014.

The ruling Justice and Development Party (AKP) finished first in the parliamentary race but was deprived of enough seats to rule outright after the left-wing pro-Kurdish Peoples’ Democratic Party (HDP) crossed the 10% vote threshold required to enter parliament. Had the HDP fallen short, its seats would have gone to the AKP.

However, the AKP's partner, the Nationalist Action Party, surprised observers by winning 11%, about twice the forecast in opinion polls. That gives their right-wing alliance control of the legislature, should they continue to act in unison as they have since 2016.

Either way, the authority of parliament is greatly diminished under Turkey’s new system. Erdogan will now appoint the next government, and he has said he will have as few as 13 ministers, down from the current 26.

Gone is the prime minister, his role abolished, and much of parliament's oversight of the executive branch. The president will appoint senior judges, set the budget and can issue decrees as laws.

Erdogan hastened the transition to his new role, bringing forward the vote by 17 months. He cited security concerns and the Turkish military’s operation against Kurdish militants in Syria as reasons for the snap elections. Analysts said the incumbent may also have feared a sharp slowdown in the economy expected later this year would lose him support if the elections had been held on schedule.

The economic downturn, in which the Turkish lira has lost 20% of its value against the dollar this year, and weariness with nearly two years of emergency rule had stoked discontent among voters.

But they decided to stick with a leader whom one voter called “our father.”

“We need a strong leader to stand up to Europe,” said Sait Bilgi, 54. “The rest of them talk about destroying what he has built. Our country will only continue to grow with him.”

Ince, a combative former schoolteacher, held 107 rallies in the two-month campaign, in which he drew record crowds and railed against Erdogan for acting like a dictator, raising hopes among many in this deeply polarized country that he would be able to unseat the incumbent in a runoff.

Ince also accused Erdogan of imposing a de facto media ban on covering the opposition. The state-run broadcaster gave Erdogan a total of 181 hours of airtime, Ince 15 hours and Meral Aksener, a right-wing politician who hoped to become Turkey’s first female president, three hours, according to a member of the broadcasting watchdog. Aksener attracted 7.35% of the vote.

Selahattin Demirtas, the former leader of the HDP who finished in third place with 8.3%, spent the election campaign behind bars, imprisoned during his trials on terrorism charges stemming from his political speeches. He has said his imprisonment was to silence him.

An unfair media landscape and reports of harassment against the HDP marked the campaign, according to an interim report from the Organization for Security and Cooperation in Europe, which sent election observers to Turkey.

Kati Piri, the European Parliament’s Turkey rapporteur, told Al-Monitor ahead of the vote the campaign had been “everything but free and fair.

“The media environment, one of the candidates — Demirtas — being in jail, the new election legislation showed many irregularities happening ahead of the polls,” she said.

More than more than 42.5 million people voted, a record turnout of 87.5%, according to Anadolu Agency.

The HDP reported a handful of irregularities to the High Electoral Board during polling, including bloc voting and armed groups intimidating voters in the largely Kurdish southeast.

In the Kurdish town of Suruc, bloodshed erupted earlier this month between AKP and HDP supporters, killing four people, marring what had otherwise been a largely peaceful election. On Sunday, the HDP complained of voting in the open or bloc voting and physical attacks on poll authorities in Suruc.