Nationalist presidential candidate Meral Aksener has joined a growing chorus demanding the release of politician Selahattin Demirtas, who is staging a quixotic bid to become head of state from his prison cell. 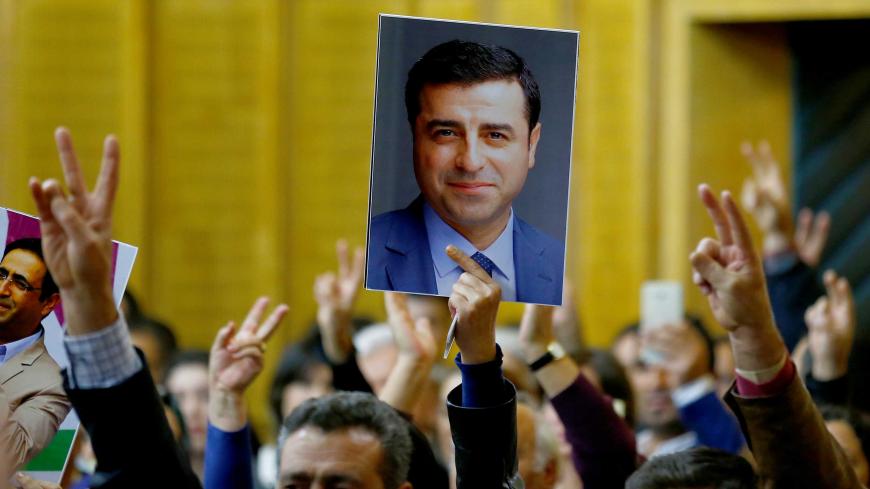 A supporter holds a portrait of Selahattin Demirtas, the detained leader of Turkey's pro-Kurdish Peoples' Democratic Party, at a meeting of the Turkish parliament in Ankara, Turkey, Nov. 8, 2016. - REUTERS/Umit Bektas

Right-wing politician Meral Aksener has called on Turkish President Recep Tayyip Erdogan to release their mutual rival Selahattin Demirtas from prison, joining a growing array of voices demanding freedom for the Kurdish politician who is running in the presidential election next month.

Demirtas' ongoing detention has added to broader concerns about whether the June 24 elections, which Erdogan pulled forward by 17 months, will be democratic at a time when the country is under a state of emergency that has allowed the incumbent president to largely rule by decree.

The call by Aksener, who hopes to become Turkey’s first female president, followed others from main opposition candidate Muharrem Ince and the small Saadet Party’s Temel Karamollaoglu. While their appeals are widely seen as a gesture to win over Kurdish voters, who make up roughly 20% of the electorate, the hawkish Aksener’s is a bigger gamble, risking a backlash from her nationalist base that views Demirtas and his party with deep suspicion.

“Demirtas is still a defendant; a verdict has not been given on his behalf,” Aksener told reporters on Tuesday. “I would like for a person who has been nominated to comfortably campaign with us under equal conditions.”

Demirtas himself filed a legal petition for release this week, arguing his imprisonment violates the Turkish Constitution’s guarantee of free and fair elections. His lawyers are optimistic he could be set free soon.

Even ruling Justice and Development Party (AKP) lawmaker Aziz Babuscu told CNN Turk he believed Demirtas should be freed, though his remarks sparked anger among Erdogan’s hard-line supporters and calls for his expulsion from the party.

Aksener’s comments are the latest sign of uncharacteristic unity from Turkey’s fractured opposition since Erdogan called snap elections last month. Constitutional changes narrowly approved in a referendum last year that largely sideline the parliament and transform Erdogan’s office into a powerful executive post with unprecedented powers will come into effect with the vote.

Aksener’s Iyi or Good Party has joined a bloc with Ince’s Republican People’s Party, Saadet and a tiny fourth party for the parliamentary poll, which will be held simultaneously with the presidential vote. Yet the cooperation only goes so far.

Their alliance left out Demirtas’ pro-Kurdish Peoples’ Democratic Party (HDP), parliament’s second-biggest opposition group, much maligned amid a resurgence of violence by the armed Kurdistan Workers Party (PKK), which has waged a three-decade campaign for autonomy that has killed more than 40,000 people.

The HDP remains disappointed it was excluded from the opposition bloc, chairwoman Pervin Buldan told Cumhuriyet. She told another news outlet that Aksener’s comments were a cynical and improbable ploy to win Kurdish votes.

Erdogan historically attracted about half of Turkey's Kurdish votes, but has swerved hard to the right since a 2016 coup failed to oust him. A military campaign in the Kurdish-dominated province of Afrin in Syria earlier this year stoked nationalist fervor among Turks but left many of his Kurdish supporters disenchanted.

Erdogan, who commands a comfortable lead in the polls, has likened Demirtas to a terrorist, accusing him of collaborating with the outlawed PKK. Demirtas denies the charges.

The former human rights lawyer played a key role in Erdogan’s project to end the PKK conflict during a 2½-year peace process, mediating between the government and the rebels before it collapsed in 2015, unleashing the worst fighting in two decades. Some 3,500 people were killed, according to the International Crisis Group.

Despite the peace effort, Demirtas remained one of Erdogan’s most outspoken critics for his perceived authoritarianism, challenging him for the presidency in 2014 and, a year later, leading the HDP to a record third-place showing in parliament. That result deprived the AKP of single-party rule for the first time since it swept to power in 2002, and the AKP recaptured full control of the government when Erdogan forced a re-vote a few months later.

Erdogan said this week that he would not stand for a hung parliament nor a divided government in which he wins the presidency but his party loses control of parliament.

“We have done our homework well, we are working well and we would not allow a development that will not let the system work,” he told Bloomberg television. “For matters to develop exactly in the way we planned, I mean Plan A, Plan B, Plan C — of course all of these will happen.”

Already, the state of emergency, under which tens of thousands of Erdogan’s opponents have been jailed and hundreds of media outlets and civil society groups banned, and legislation pushed through by the AKP earlier this year to include unstamped ballots and other controversial measures have cast a shadow over the poll, said Howard Eissenstat, a Turkey researcher at St. Lawrence University and a senior non-resident fellow at the Project on Middle East Democracy.

“Recent reforms have made election-day manipulation more likely, but ballot stuffing is not the only basis for determining whether an election is fair,” Eissenstat told Al-Monitor, pointing to emergency rule and a de facto media blackout on opposition candidates. “There is no question that the election is occurring in unfair and unfree conditions. The question is how blatant this will become.”

State broadcaster TRT had dedicated more than 37 hours of airtime to Erdogan and his nationalist allies as of May 6, Hurriyet Daily News reported. TRT broadcast less than 3½ hours of combined coverage of opposition parties.

“Releasing Demirtas would be read as a sign of weakness, of panic,” he said. “I don't think Demirtas will be released anytime soon and I am doubtful whether it costs Erdogan anything politically. For many voters — including many opposition voters — Demirtas, and the HDP more generally, are simply a PKK front.”