Despite the claims of nationalist candidate Meral Aksener, the Turkish opposition is distressingly split and neither side has succeeded in drawing votes away from President Recep Tayyip Erdogan’s ruling Justice and Development Party. 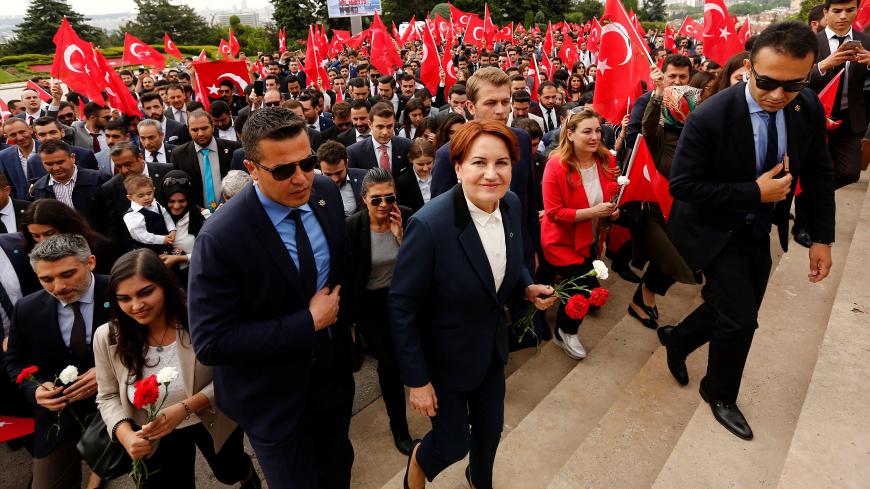 Meral Aksener, leader of the opposition Iyi (Good) Party and a candidate in the June 24 presidential snap election, arrives at Anitkabir, the mausoleum of modern Turkey's founder Mustafa Kemal Ataturk, to attend a Youth and Sports Day celebration, Ankara, Turkey, May 19, 2018. - REUTERS/Murad Sezer

After an unprecedented show of unity, is Turkey’s opposition reverting to its old ways? The question was raised when Meral Aksener, the presidential candidate for the right-wing Iyi (Good) Party dug her claws into Muharrem Ince, who is running on the ticket of the main opposition Republican People’s Party (CHP).

In a May 28 interview with the independent online newspaper Duvar, Aksener claimed that “nearly all the polling companies indicate that if Mr. Ince [faces President Recep Tayyip] Erdogan in a second round of balloting, Erdogan will win by a wide margin. But if I do, Erdogan will lose.”

Despite her insistence, Aksener’s assertions are not born out by most pollsters. For now all signs indicate that Erdogan would prevail in a potential second round that would be held on July 8. But that is hardly the point. With only three weeks left before the June 24 snap parliamentary and presidential polls, the greatest thing Erdogan’s opponents could do for him would be to turn on each other, and that is what an increasingly shrill Aksener appears to be doing.

One survey seen by Al-Monitor suggests she would get 11.2% in a first round, little more than half Ince's 20.1%. Aksener also gets a whisker less than Selahattin Demirtas, the former leader of the Peoples’ Democratic Party (HDP), the largest pro-Kurdish bloc. He is running an ebullient campaign from prison via witty messages and cheerful pictures posted on social media.

Aksener’s outburst could well be seen as ingratitude. Her party was able to qualify for the parliamentary polls only after the CHP transferred 15 of its lawmakers and forged an electoral alliance with it for the parliamentary race. The transfusion gave Iyi the requisite quorum to run. All eyes are now on Ince, who even die-hard CHP critics concede is performing far better than expected. Over the past three weeks, Ince has crisscrossed the country promising to restore democracy, rule of law and offer better pay and education. The twinkly-eyed former physics teacher has also pledged to allow education in the Kurdish language and to solve the Kurdish problem through dialogue, not guns. Ince has steered clear of the revanchism— the bane of Turkish politics — treating Erdogan with a mix of contempt and near pity. Adding to Aksener’s woes, the HDP has already declared that it would back Ince in a second round. Analysts say it is absolutely key that Ince not succumb to her taunts. It's a long shot but many reckon conditions have never been riper for an opposition win.

The opposition’s abiding problem is that neither Aksener nor Ince has succeeded in drawing votes away from Erdogan’s ruling Justice and Development Party (AKP). Recent economic setbacks including the sharp decline in the value of the Turkish lira have left a swelling number of AKP supporters increasingly disaffected. Ince professes to be pious — he studied the Quran, never misses Friday prayers and his mother wears an Islamic-style headscarf. But the CHP label automatically equates him in the eyes of many AKP voters with the kind of militant secularism that treats Islam as a threat. Similarly, Aksener’s secular strain of Turkish nationalism has little appeal among the pious.

So where will the disgruntled go? Religious Kurds were widely expected to defect to the HDP because of Erdogan’s alliance with the far-right nationalist leader Devlet Bahceli, who egged on Turkey’s invasion of Syrian Kurdish Afrin. But polls suggest they haven’t. All eyes are on Temel Karamollaoglu, the spry and refreshingly liberal leader of the pro-Islamic Saadet (Felicity) Party who is running a lively campaign. But his party is so tiny that it's hard to measure its current standing though random sampling. Felicity is also running in alliance with the CHP and Iyi for the legislature, and the halo effect may prove costly. Meanwhile, Huda-Par, a small and militantly Islamist party that is mainly active in the Kurdish-dominated southeast, announced it would back Erdogan as president, leaving the Kurdish vote pretty evenly divided between Demirtas in the first round and the rest. But as things stand, few are likely to vote for Aksener.