Ahead of critical elections this month, Turkey’s public broadcaster and mainstream TV channels are under fire for an unprecedented level of bias in favor of the government, while signs are emerging of audience fatigue with Erdogan. 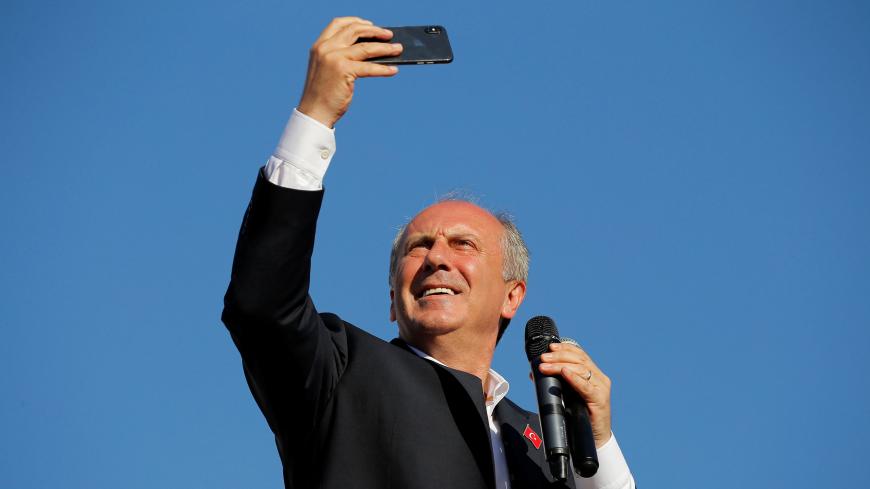 Muharrem Ince, the presidential candidate of the main opposition Republican People's Party, takes a selfie with his supporters during an election rally in Istanbul, Turkey, June 3, 2018. - REUTERS/Huseyin Aldemir

ANKARA, Turkey — “Who has a smartphone?” Muharrem Ince, the presidential nominee of Turkey’s main opposition party, asked the crowd during a recent rally in Denizli. “Now, you all start broadcasting,” he roared. “There is the government media, but there is also the people’s media.”

Ince’s call for social media streaming of his rally was not just an effort to reach out to a wider audience, but also a protest. Ahead of Turkey’s critical presidential and parliamentary polls on June 24, opposition parties face an unprecedented blackout by mainstream television channels, almost all of which are now in pro-government hands. Although Ince and his Republican People’s Party (CHP) still manage to get some coverage, others like the pro-Kurdish Peoples’ Democratic Party (HDP) are virtually banished from the screens, where President Recep Tayyip Erdogan is an omnipresent figure.

Opposition parties and their supporters have increasingly turned to social media, which some now call “the penguin repellent” — a reference to the mass anti-government protests in spring 2013, when one of Turkey’s main news channels ignored the eruption of unrest at Istanbul’s Gezi Park and aired a documentary about penguins instead.

Tezcan Durna, a scholar of political communication, sees the “penguin-repellent movement” as a form of political resistance. “It is another way for opposition voters to resist the oppression and persecution they experience,” Durna told Al-Monitor. “Ince is basically telling Erdogan, ‘If you have your media, which you bought out with money, I have my own movement, which has sprung up spontaneously and I am part of it.’ This is Ince’s way of resisting the media’s denial of coverage.”

In the May 1-25 period, the country’s two main news channels, NTV and CNN Turk, dedicated a combined 70 hours of coverage to Erdogan’s Justice and Development Party (AKP) and its election ally, the Nationalist Movement Party (MHP), according to a report by the two opposition-nominated members of Turkey’s media watchdog RTUK. The report was made available to Al-Monitor. The CHP and Ince got 22 hours, while the Good Party and its presidential candidate, Meral Aksener, got 17 minutes and the HDP received no coverage at all.

Besides the gap between the government and the opposition, the statistics reflect also a curious gap between the opposition’s two strongest candidates in the presidential race — Ince, who is seen as more left-leaning, and the right-wing Aksener, who many believe could lure disgruntled voters from Erdogan’s conservative base.

According to the Good Party, this is also a deliberate strategy imposed by Erdogan on the media. Lutfu Turkkan, the party’s deputy chair in charge of media relations, told Al-Monitor that the “positive discrimination” accorded to Ince aimed to undermine Aksener, whom Erdogan sees as a stronger rival, especially if the presidential vote goes into a second round. “Erdogan wants to compete with Ince. He believes a rival from the left will be easier to defeat,” Turkkan said.

In a similar vein, Durna argued that the strategy aimed to deepen polarization in Erdogan’s favor. According to Durna, Erdogan’s alliance with the MHP seeks to consolidate the rightist and conservative vote, but the Good Party, founded last year by MHP defectors, is “undoing” the plan. So is the small Islamist Felicity Party, which has joined the secularist CHP and the Good Party in a rare unity effort on the opposition camp. The three disparate parties have formed an electoral alliance for the parliamentary polls, and though they have fielded separate candidates in the presidential race, they are widely expected to back whichever contender makes it to a possible runoff against Erdogan.

“Erdogan wants to convince voters that the election contest is between the right and the left, between Kemalists and Islamists,” Durna said. “That is why both the Good Party and the Felicity Party are denied coverage [in the mainstream media] — because they are undoing this narrative and the polarization.” Similarly, Durna said, the CHP receives more coverage not simply for being the main opposition party, but because its visibility serves Erdogan’s polarization strategy.

Turkkan said he was making efforts to ease the embargo on Aksener. Referring to the pro-government Demiroren conglomerate, which after its recent acquisition of the Dogan Media Group now controls 70% of the Turkish media, he said, “The Demiroren group did not even respond to my appointment requests, while other media groups openly told me they were under pressure and would give [Aksener] airtime if they managed to overcome the pressure.”

That even a seasoned and popular politician like Aksener is struggling for airtime illustrates how the profound changes in media ownership under the AKP have come to directly undermine the opposition. In a recent report on the issue, academics Benan Eres and Hakan Yuksel noted that the Turkish media never enjoyed full freedom, but stressed that “previous governments sought to keep close ties with the media, while the AKP moved to directly adjust ownership relations according to its wishes.” The transformation, they say, has “normalized partisan and polarizing editorial policies.”

When it comes to state television, things appear even worse for the opposition. In May, public broadcaster TRT dedicated 28 hours of coverage to Erdogan and his alliance, two hours to the CHP and Ince, and nine minutes to the Good Party and Aksener, while completely ignoring the HDP and Felicity, according to RTUK member Ilhan Tasci.

“Principles pertaining to democratic legal rules — impartiality, equal opportunity, balanced coverage — have all been trampled on,” Tasci told Al-Monitor. “Private channels aside, the TRT — a broadcasting institution funded by taxes paid by the entire 80 million nation — is spreading the propaganda of a single man.”

Even some in pro-government quarters appear annoyed by the blatant bias. In a May 8 column in the pro-government daily Yeni Safak, communication specialist Ali Saydam called for reflection on “how wise it is for TV channels to air only the president’s speeches and offer little chance to the opposition and whether this … even benefits the opposition by victimizing it.”

Indeed, recent audience measurements suggest that Turks may be getting tired of watching Erdogan. On May 23, Temel Karamollaoglu, the leader of tiny Felicity Party, beat Erdogan in the TV ratings when he got a rare chance for a live interview on the same evening that Erdogan was interviewed on another channel. Ince has also enjoyed high ratings.