Turkey’s Good Party leader Meral Aksener has inspired hope among many that she could beat President Recep Tayyip Erdogan in the June polls, but others fear she's standing in the way of a united opposition challenge. 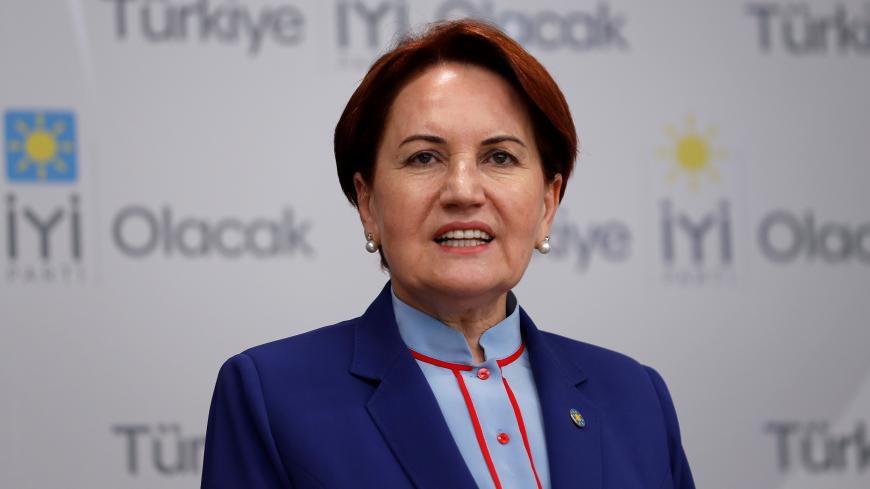 Meral Aksener, the leader of the Iyi or Good Party, speaks during a news conference at her party headquaters in Ankara, Turkey, April 24, 2018. - REUTERS/Murad Sezer

ANKARA, Turkey — Meral Aksener, the secular nationalist leader of Turkey’s Iyi or Good Party, known as the “she-wolf” of Turkish politics, was the first to declare she would challenge President Recep Tayyip Erdogan in June's snap elections, which many see as the last chance to stop Turkey’s descent into full-fledged authoritarian rule. The polls, in which Erdogan relies on a conservative-nationalist alliance between his Justice and Development Party (AKP) and the far-right Nationalist Movement Party (MHP), will mark Turkey’s transition to a new governance system headed by a virtually omnipotent president.

Aksener has inspired hope among many that she could beat Erdogan, but her apparently intransigent strategy has sparked concerns she might ultimately enable Erdogan to overcome an opposition that is for the first time making efforts to join forces.

A prominent political figure for more than two decades, Aksener started off as a parliamentarian for the center-right True Path Party (DYP) in 1995. The following year, at age 40, she became interior minister, shortly after the so-called Susurluk accident, a momentous event in Turkish politics that exposed the security forces’ collaboration with the underworld in the fight against Kurdish militants.

Journalist Emin Ozgonul, who closely followed Aksener at the time, said she quickly built a reputation as a “mannish woman.” Recalling Aksener's debut as interior minister, he said, “Her first move was to fire the director-general of the police. When the director refused to move out of his office, she took the new director with her and stormed into the office one midnight. She is said to have broken the door.”

Aksener’s stint as interior minister coincided with another watershed in Turkish politics: the so-called postmodern coup, a harsh army-led secularist campaign that forced Turkey’s first Islamist Prime Minister Necmettin Erbakan to resign in 1997 only after a year in office. Erbakan headed a coalition government between his Welfare Party and the DYP. According to journalist Ahmet Dirican, Aksener showed more resistance to the military’s pressure than the Welfare members did, even though they were the prime target of the campaign. “One general even threatened to ‘impale’ her,” Dirican recalled.

From 2007 to 2015, Aksener was a lawmaker for the MHP. When MHP leader Devlet Bahceli moved to align with Erdogan, Aksener and several other influential party members launched a revolt that eventually fractured the MHP and led to the creation of the Good Party in October.

Six months later, the Good Party has the support of 16% of the electorate and Aksener is Erdogan’s strongest rival for the presidency, according to opinion polls.

On June 24, Turks will vote for both president and parliament. As the critical polls near, Aksener’s moves are heating up the game. In a staggering maneuver last week, she struck a deal with Kemal Kilicdaroglu, the leader of the main opposition Republican People’s Party (CHP), under which 15 CHP lawmakers switched to the Good Party. The move was apparently prompted by suspicions that the authorities would bar the Good Party from running in the elections on legal technicalities. The Good Party now has 20 members in parliament, guaranteeing the party’s participation in the polls. Dirican opines the move took the government aback, and Ozgonul believes the opposition gained “an important psychological advantage.”

Ozgonul described Aksener as a “gutsy, indomitable and confidence-inspiring” politician. Many believe she has what it takes to beat Erdogan in the presidential race. But is the optimism premature? Dazzling activity is underway between opposition parties in a bid to shape a joint strategy against the AKP-MHP alliance, and some wonder whether Aksener is actually paving the way for Erdogan’s victory by standing in the way of a united opposition bloc.

Leading the unity effort is the CHP, which appears to have two key targets: a joint opposition candidate for the presidential race and a broad-based multi-party alliance for the parliamentary polls.

The CHP's decision to “lease” 15 lawmakers to the Good Party was the first move in this drive. It was followed by a flurry of meetings on a joint presidential candidate between the CHP, the Good Party and the small pro-Islamic Felicity Party, which has emerged as an alternative for disgruntled AKP voters. In several days, however, the prospects for compromise faded as Aksener insisted on running, while the CHP failed to name a specific candidate and the Felicity Party lobbied for former President Abdullah Gul.

The CHP’s plan B is what it calls a “zero-threshold alliance.” Under Turkish law, a party must collect at least 10% of the national vote to enter parliament. Thus, votes for parties that fail to pass the threshold are effectively wasted. The seats they are able to secure in individual constituencies are taken over by those who overcome the barrier. Hence, to make sure the opposition performs at full strength, the CHP is proposing an alliance between all opposition parties that would effectively remove the threshold for the smaller ones.

Such an alliance could win more parliamentary seats than the total of what the parties could win individually. Moreover, the argument goes, such an alliance would boost the opposition in the second round of the presidential race scheduled for July 8 if no candidate manages to get more than 50% in the first round. The idea here is that opposition voters, driven by the spirit of unity in the parliamentary polls, would support whoever makes it to the second round against Erdogan.

Aksener has remained indifferent to this proposal, even though the other opposition parties appear willing. The reason for her reluctance is that the proposed alliance includes the pro-Kurdish Peoples’ Democratic Party (HDP), which she accuses of links to Kurdish militants considered terrorists by Ankara.

The CHP is working on one last formula to convince Aksener to join up: an opposition alliance without the HDP. However, Aksener is reportedly reluctant on this formula as well.

In fact, the HDP is also reluctant to form any partnership that involves the Good Party, given Aksener’s record on the Kurdish question. Her stint as interior minister is associated with one of the darkest periods in the mainly Kurdish southeast when human rights abuses and extrajudicial killings were almost a daily occurrence. Aksener insists she had nothing to do with the killings that happened during her term.

For better or worse, Aksener’s stance will seal the fate of the opposition's unity efforts. Should they fail, the parties will field separate candidates against Erdogan, hoping for a second round in which they will unite behind the remaining contender. And if Erdogan clinches the victory in the first round? That is a nightmare scenario the opposition doesn't even want to think about at present.