Turkey’s top Kurdish leader Selahattin Demirtas, the only person who could deprive President Recep Tayyip Erdogan of his ambition, is officially joining the presidential race from his prison cell. 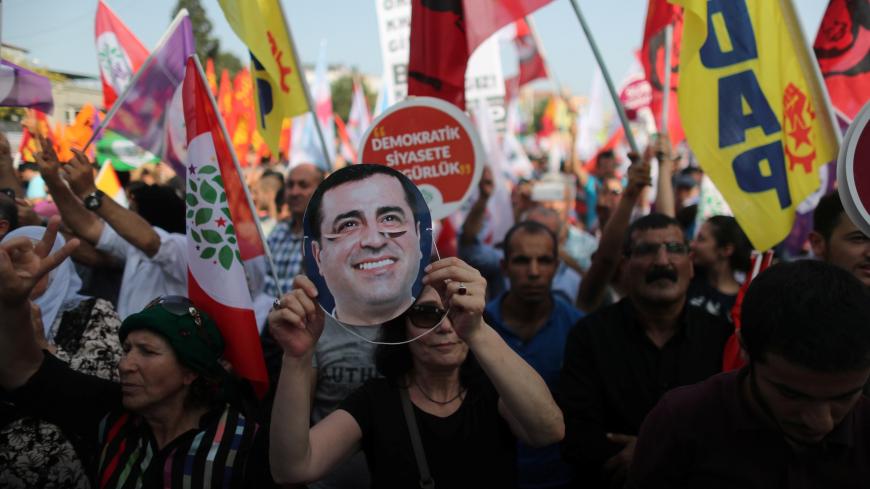 Turkey’s top Kurdish leader Selahattin Demirtas, one of the few names who proved he could challenge President Recep Tayyip Erdogan’s charisma, has decided to run in the June 24 presidential elections, seemingly undaunted by the bars of his prison cell.

Turkey’s pro-Kurdish Peoples’ Democratic Party (HDP) announced Demirtas’ candidacy May 4. “Our candidate is Selahattin Demirtas, who is being held as a hostage in Edirne Prison,” HDP Co-chair Pervin Buldan was quoted by Hurriyet Daily news as saying in a statement.

Turkey’s westernmost province of Edirne is the farthest point from the predominantly Kurdish southeast where Demirtas’ main constituency is located.

Demirtas ran against Erdogan in the August 2014 presidential race, winning 9.8% of the votes, and, more importantly, raising hopes that for the next parliamentary elections a pro-Kurdish party might pass the 10% national election threshold for the first time in history.

Indeed, the HDP led by Demirtas won 13.1% of the vote on June 7, 2015, passing the threshold. Kicking that campaign off with a powerful slogan referring to Erdogan’s dream of an executive presidency — “We won’t let you become president” — the HDP’s election success also stripped the ruling Justice and Development Party’s (AKP) of the parliamentary majority required to form a single-party government.

Erdogan in return pushed for a rerun election held in November 2015 and terminated the peace talks between the Turkish government and Kurdish militants. The political climate during the fight against the Kurdistan Workers Party managed to unite Turkey’s nationalist voter base behind Erdogan. The AKP won a constitutional majority to form a single-party government, paving the way for Erdogan to further strengthen his one-man rule. The July 2016 coup attempt provided the most important ammunition for this cause, giving him a pretext to imprison dissidents against his rule, including Demirtas.

However, Demirtas never gave up his defiant tone.

“Despite all the pressures, the virtuous stand of the millions whose hearts are beating with me showed that there is no prison cell that can accommodate 6 million people,” he said in one of his messages from his prison cell, referring to the total vote the HDP acquired in June 2015.

Demirtas also penned two articles and managed to leak them to the press, one of which was published by Yeni Ozgur Politika, a pro-Kurdish media outlet banned in Turkey.

“The political arena is shaking with various tactical moves as the June 24 snap elections draw closer. The 50% threshold introduced by the AKP itself and the alliances act seem to have turned into a nightmare for the AKP-MHP [Nationalist Action Party] extreme right-wing bloc,” Demirtas wrote. “As the AKP and its leadership approach the end of their life, they keep making greater mistakes. The AKP's trying to break the hand that the Kurdish people offered for peace — instead of embracing it — was the beginning of the end for the AKP.”

He continued and challenged the Islamist credentials of the AKP, writing, “Looking with an objective lens, one can see that even cultural Islam has deteriorated and degenerated during their term, let alone political Islam.”

Indeed, various Islamic communities in Turkey, including the tiny Islamist Felicity (Saadet) Party, now consider the AKP and its leadership as being like "the men who sold out the Islamist cause."

In his letter to the daily Cumhuriyet — perhaps the only remaining mainstream newspaper that is not subject to the control of Erdogan — Demirtas said the upcoming elections will be a “historic breaking point” for Turkey.

“Fostering left-democratic values against fascism and carrying them to power is possible more than ever. If all progressive, revolutionary, public-spirited powers and cadres, youth and women present a united stance worthy of the leading role and put all of their energies and time to this struggle, then oppressed people could be the winning side of this historic breaking point,” he wrote in his letter published May 2.

In his second article, published on the day his nomination was announced, he reiterated his call for a united opposition. “If the opposition manages to agree on a principled arrangement, we may witness the 'tragic' end of the AKP.”

However, such an arrangement does not seem to be in the cards. Four opposition parties who have formed an alliance for the parliamentary elections — including the main opposition Republican People’s Party (CHP), the Good (Iyi) Party led-by Meral Aksener and the Felicity Party — excluded the HDP. The parties are running their own presidential candidates, however.

Now the danger is that if the HDP is unable to pass the 10% threshold to enter parliament, its current seats will be taken over by the AKP as the next most popular party in Turkey’s mainly Kurdish southeast. Some Turkey observers and analysts argue that the government was counting on this scenario when deciding to hold snap elections.

“The snap elections pre-empt any attempt by the AKP to veer off the nationalist course in order to secure the Kurdish vote. A few weeks before the snap elections were called, the governing party was reported to be considering a new 'opening' to the Kurds, to stem the rapid defection of Kurdish voters — not least as a result of Turkey’s recent military intervention against the Kurds in Syria,” Halil Karaveli, a senior fellow with the Central Asia-Caucasus Institute and Silk Road Studies Program, wrote.

Yet the Kurdish electorate could foil this plan. If the conservative and religious-minded Kurds who used to vote for the AKP abandon Erdogan and rally around Demirtas as some of them did in the June 2015 elections, Erdogan may not get elected in the first round. If Erdogan cannot get over 50% of the total vote June 24, the second round of the elections will be held July 8.

In any case, if the HDP manages to pass the election threshold, then we might be watching a different ballgame this summer.

The seemingly unshakable power of Erdogan could only be challenged by somebody with the composure of Demirtas. Only Demirtas could prevent Erdogan from reaching his goal; and he is doing it from his prison cell. If you can do this from a prison cell, you look indomitable.