Is Erdogan’s re-election a foregone conclusion?

Kurdish sources say that if the presidential election goes to a second round, Kurds would not vote for Good Party leader Meral Aksener but certainly would vote for former President Abdullah Gul if he were on the ballot. 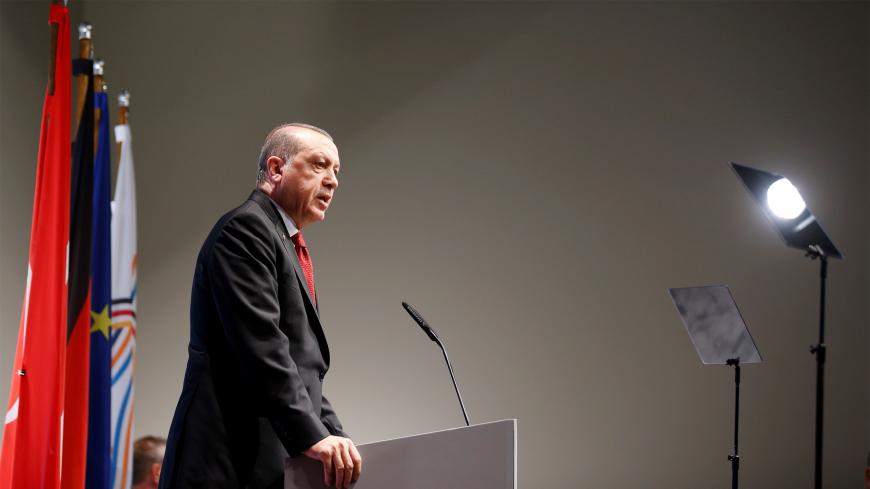 Is Turkey’s strongman Recep Tayyip Erdogan’s re-election as president in the snap elections to be held June 24 a foregone conclusion?

Almost every Turkey observer said it was when new Erdogan ally Devlet Bahceli, the chairman of Turkey’s Nationalist Movement Party, called for early elections and Erdogan heeded his call within 48 hours.

“The outcome of these elections is hardly in question: President Recep Tayyip Erdogan will win,” Turkey expert Howard Eissenstat wrote recently. The Project on Middle East Democracy fellow says the vote is part of Turkey's “electoral authoritarianism,” where political power is uncontested but the facade of multiparty democracy is maintained.

Erdogan needs that facade and the legitimacy the elections would provide for his one-man rule. The elections are to be held under the state of emergency, which means the campaigning of Erdogan’s possible contenders could face serious obstacles; opposition rallies are likely be harassed. Moreover, thanks to recent legislation, election rigging could be also possible with the usage of unstamped ballots and so forth. So there has been no reason to think that Erdogan would not be re-elected.

The Turkish setting has been designed to comply with his whims and political ambitions with no real institutional checks and balances remaining. The snap elections would be the last step in the consolidation of his power in what he and his loyalists call the “New Turkey.”

However, the race took an unexpected twist when the opposition made an unexpected political maneuver. The main opposition Republican People’s Party (CHP) transferred 15 of its lawmakers to the nationalist Good Party to enable it to run in the snap elections. The Good Party’s participation in the elections could cost the Erdogan-Bahceli coalition dearly.

More important, a flurry of contacts have been established among three opposition parties, the CHP, the Good Party and the Islamist Felicity Party (Saadet), seemingly attracting the discontented of the ruling Justice and Development Party (AKP). Felicity’s chairman, Temel Karamollaoglu, is known to favor his former comrade, and Erdogan’s predecessor, Abdullah Gul, to run for the presidency.

The possibility that Gul could emerge as the opposition front’s joint candidate versus Erdogan seemingly rang alarm bells that the snap elections could turn into a trap for the president. If it is Gul who runs against Erdogan, Turkey’s strongman could face defeat, indeed.

Ibrahim Uslu, a prominent Turkish pollster, predicted Gul has a chance of winning 48.5% of the votes. A number of other polls also began to announce their findings that Erdogan cannot get over 50% and therefore might not be re-elected.

While discussion in the last few days amid the flurry of contacts among the leaders of opposition parties caused hopes and speculation to increase among the vast anti-Erdogan circles, no concrete result has been produced, to the relief of the government. Good Party leader Meral Aksener seemingly has stubbornly persisted in her candidacy, while the leftist and secularist zealot factions of the CHP could not reconcile themselves with supporting Gul against Erdogan.

Prime Minister Binali Yildirim, on his way back from an official visit to Spain, did not hide his relief and happiness. On board his aircraft, he spoke to accompanying journalists, hinting at the opposition’s failure to agree on Gul’s candidacy by saying "[political] engineering was underway but it exploded in their hands.”

Gul’s name is not totally removed from the consideration of the opposition, but from April 26 on, it is unlikely that he would be the opposition front’s common candidate. Nevertheless, he is seen as the only name that could attract support from AKP circles and thereby diminish the chances of Erdogan’s re-election.

At this juncture, it looks like each party will have its own candidate and force the election of the president for a second round. If no candidate gets over 50%, the top two will compete in the second round.

As long as the opposition remains splintered and fractured and cannot unite around one name, the greater the likelihood that Erdogan will be elected in the first round. Yet thanks to the Kurdish wild card, Erdogan might be pushed below the required 50% threshold in the first round, preventing him from immediately consolidating his grip on power. It remains to be seen whether, in the case of a second round, the opposition could unite on whomever would be Erdogan’s rival.

Kurds, believed to constitute around 18-20% of the electorate, have the potential to play a decisive role in sealing Erdogan's fate. The religious-conservative segment of the Kurdish population that used to vote for Erdogan and the AKP is deeply disappointed with Erdogan’s alliance with anti-Kurdish Turkish nationalist zealots and the Afrin operation that targeted Kurdish self-rule in Syria. Moreover, the removal of Kurdish-language signs in every corner of Turkey’s Kurdish-inhabited southeast and the destruction of Kurdish national symbols also drew ire from conservative Kurdish society.

If Kurds, en masse, decline to vote for Erdogan, it could be difficult for for him to secure more than 50%, particularly in the first round of voting.

The imprisoned Selahattin Demirtas, the extremely popular former chairman of the pro-Kurdish Peoples' Democratic Party (HDP), is expected to be nominated by his party for presidency. He ran against Erdogan in 2014 and his winning more than 9% of the vote emboldened the HDP to take the risk of overcoming the 10% electoral threshold to run in June 2015 parliamentary elections. The HDP managed to cross that threshold, winning 13.7%, and sent 80 elected members to Turkey's parliament.

If Demirtas runs for the presidency from prison, that could attract a considerable amount of Kurdish votes and be detrimental to Erdogan’s calculations.

My reliable Kurdish sources tell me that if the presidential elections go to a second round, Kurds would not vote for Aksener but certainly would vote for Gul.

Parliamentary elections will be held simultaneously with the presidential one; it is not a foregone conclusion that the AKP and MHP will maintain a safe majority in the upcoming parliament. Nor is Erdogan’s re-election to the presidency entirely assured.

While Erdogan’s re-election is likelier now following the opposition’s inability to unite around Gul, there is no guarantee how and where the election pendulum will move.