Four of Turkey's opposition parties, including the largest, are forming an alliance to challenge the ruling party for parliamentary seats. 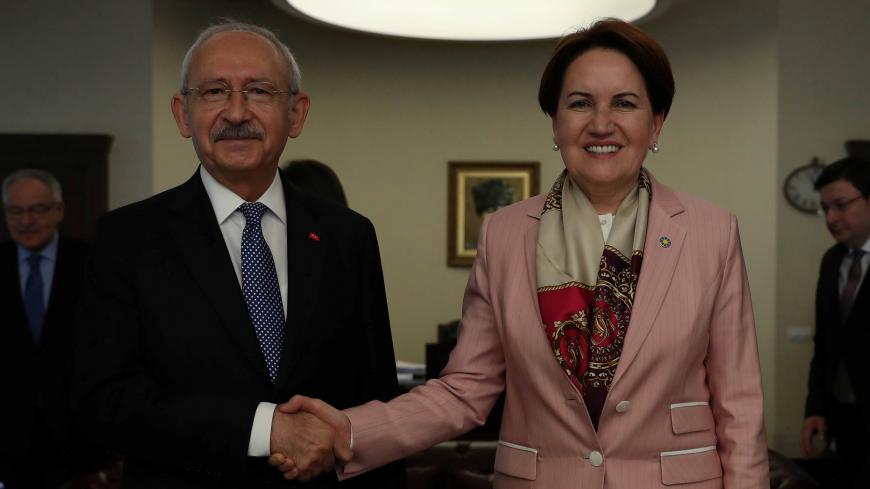 Turkey’s fractious opposition is clambering this week to stitch together an electoral alliance after efforts to unite behind a single presidential candidate able to challenge incumbent Recep Tayyip Erdogan in a June 24 election crashed.

Erdogan’s decision to pull forward by 17 months presidential and parliamentary elections caught other political parties off balance, even though speculation had swirled for months he would go to the polls sooner rather than later to usher in constitutional changes that vastly empower the presidency and effectively sideline parliament.

Now, the main opposition Republican People’s Party (CHP) has turned to the parliamentary vote and agreed with the smaller and conservative Good (Iyi), Felicity and Democrat parties to contest that race together, CNN Turk reported.

Their platform, which includes a pledge to revert to a parliamentary system, will help parties with less than 10% of the national vote cross the threshold to enter the assembly and, they hope, deprive Erdogan’s Justice and Development Party (AKP) of a legislative majority. A formal announcement will come Thursday, the report read.

Members of the ruling AKP were quick to dismiss the new bloc, with Deputy Prime Minister Bekir Bozdag calling it “an anti-Erdogan alliance.”

The new alliance leaves out the pro-Kurdish Peoples’ Democratic Party (HDP), likely due to the nationalist Good Party’s hostility toward the parliament’s second-biggest opposition party, underscoring how riven with ideological and identity differences the opposition remains.

Already a plan to nominate former President Abdullah Gul, a moderate Islamist who could draw conservatives, liberals and Kurds as a consensus candidate against Erdogan, shattered over the weekend amid objections from the CHP’s secularist wing and Good leader Meral Aksener’s refusal to withdraw her own candidacy. Pressure from the AKP, Gul’s former party, may also have played a role in his decision to step aside.

At stake is a presidency with broad new powers after Erdogan narrowly won a referendum to change the constitution that followed a botched military coup in 2016. Turkey’s next head of state will run the armed forces, appoint judges and select his party’s candidates for parliament.

“This political transformation reflects that the multiparty system will transform into a two-party system, as is the case in the US. It means the old mentality of Turkish political parties is going to vanish. Of course, it’s impossible for a party with 10% to win,” he told Al-Monitor.

In a nod to the American system, Erdogan’s partnership with a nationalist party is called the Republic Alliance, while the opposition is expected to dub its bloc the Democracy Alliance.

CHP leader Kemal Kilicdaroglu, who has warned Turkey is headed for one-man rule if Erdogan wins, has acknowledged the opposition’s best chance is to unite the 49% of voters who opposed the constitutional referendum held last year. This week he made a veiled overture to the beleaguered HDP, which has seen nine of its deputies jailed and 11 stripped of their seats in parliament for alleged ties to Kurdish militants.

“We have no intention of demonizing a party,” he told Cumhuriyet newspaper. “The HDP and CHP are not associated [but] everyone who voted no [in the referendum] should be together.”

Filiz Kerestecioglu, a senior HDP lawmaker, said the center-left CHP was abandoning its social-democratic base to join a right-wing bloc and that her party will go it alone, confident it will attract enough leftists to clear the vote threshold.

As for the presidential race, Erdogan is the only certain candidate with less than eight weeks to go.

The CHP is leaving voters guessing about its nominee until Friday. Kilidaroglu has ruled himself out because he opposes the constitutional amendment that allows the president to lead a political party. Before Erdogan, the office was largely ceremonial and, until last year, neutral toward all parties.

Other parties may have named their candidates but all still have hurdles to clear. On Wednesday, Aksener formally applied to the election board to run and will now collect 100,000 signatures from voters. Temel Karamollaoglu, from the small Islamist Felicity Party, must also submit such a petition after filing his nomination. The election board will release the list of eligible presidential candidates on May 13.

The HDP will likely nominate Selahattin Demirtas, its former chairman who has been in prison for the last year and a half on terrorism charges, when it announces on Friday.

A verdict in one of the cases against Demirtas is expected June 8, and it is not clear whether a conviction would invalidate his candidacy. With 11% of the vote in the last poll, the HDP’s choice is more symbolic than strategic: a bid to draw attention to the plight of Demirtas, a rising political star and a strident Erdogan critic before he was locked up.

For its part, the AKP is wielding the power of the incumbency. The government unveiled a $6 billion package of pre-election incentives on Monday that includes checks for 1,000 liras ($245) for more than 12 million pensioners, or 15% of the population, in what appears to be “a blatant and expensive effort to buy support for Erdogan,” Bloomberg reported.

Even if the odds of unseating Erdogan are now remote and the opposition does not win a majority of seats in parliament, its efforts to form a united front could herald a shift for future elections, said Ziya Meral, a London-based defense and security researcher who tracks Turkish politics closely.

“The Turkish opposition is showing signs it is entering a smarter phase of new alliances. Even if the AKP wins this election, it is not as strong as it was four years ago or even shortly after the coup attempt. In the long run, the opposition can offer an alternative political direction,” he told Al-Monitor.

“Erdogan faces an uphill process. The state of emergency will be difficult to maintain, economically and politically, from June 25. He can no longer blame those problems on the malfunctioning of the parliamentary system. From then on, the responsibility lies with him solely,” he said.